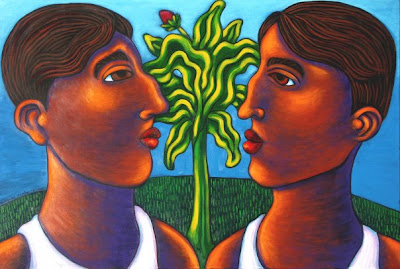 “Adam and Steve and the Banana Tree” by Tony De Carlo
Artist Tony De Carlo affirms the holiness of gay love with colorful, festive paintings of gay saints, Adam and Steve, same-sex marriage and much more -- all with a zesty Latino flavor.

Gay saints in his art include the martyred male couple Sergius and Bacchus and a series on Sebastian, the protector against plague. De Carlo began his ongoing Sebastian series in response to the AIDS crisis. He also paints many whimsical made-up saints ranging from Saint Tranny and Santa Banana to the Patron Saint of Flying Dogs.

De Carlo has done more than 20 paintings of Adam and Steve as the original gay couple. He says that they are his answer to those who condemn homosexuality based on the “ridiculous argument” that “God made Adam and Eve, not Adam and Steve.” 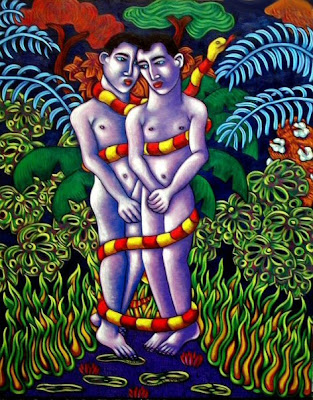 “Adam And Steve In Eden” by Tony De Carlo
Raised Catholic, he started painting saints to counteract the church’s demonization of LGBT people. His paintings confront the hypocrisy of the church, which has a long history of homoerotic images but condemns homosexuality. 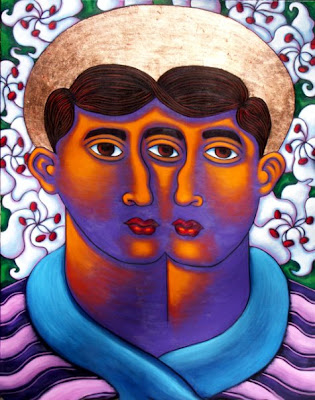 “Saint Sergius and Saint Bacchus” by Tony De Carlo
De Carlo’s art grows out of his own experience. He features the people, neighborhoods, landscapes, cityscapes, dogs and flowers that he sees in his daily life. A native of Los Angeles, he now lives in Savannah, Georgia.

De Carlo is a self-taught artist who learned to draw and paint by keeping a visual journal every day starting in childhood. As an adult he switched to painting on canvas and wood, but he still approaches his paintings like pages from a diary.

Some of his work mixes religious iconography with gay subjects, blending homoeroticism and spirituality. His vivid, sensuous paintings are bursting with color and often convey a delightful sense of fun, but he also addresses suffering with series on Saint Sebastian and the Day of the Dead.

Many of his favorite themes combine in “Marriage Equality,” one of the newest paintings in an ongoing series on same-sex marriage that he began in 1992. He shows a gay couple surrounded by the state flowers of the five states that had legally recognized same-sex marriage at that time. “One day, I hope I can paint all 50 flowers,” De Carlo said. Shown here are:
-Connecticut: Mountain Laurel (far right)
-Iowa: Wild Prairie Rose (center)
-Massachusetts: Mayflower (white flowers at top)
-New Hampshire: Purple Lilac (left and right behind shoulders)
-Vermont: Red Clover (bottom left) 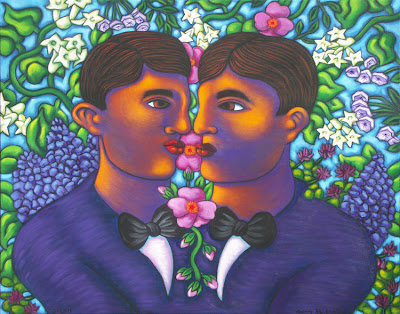 “Marriage Equality” by Tony De Carlo
De Carlo’s work is displayed regularly in museums and galleries throughout the United States, and his paintings are in collections around the world. He has also exhibited at various LGBT Pride and Latino Pride events. His work is featured in a variety of publications, including The Art of Man: Fine Art of the Male Form Quarterly Journal

De Carlo discusses his life and work in the following interview with Kittredge Cherry, art historian and author of Art That Dares: Gay Jesus, Woman Christ, and More

Kittredge Cherry: How did you get the idea to combine gay and Christian subjects in your art? Does this come from your own experience?

Tony De Carlo: I was raised Catholic and as the oldest child in my family, my parents ensured I went to Catechism, and to church every Sunday and through all of the rituals. I grew up with the imagery of saints in cathedrals, statues, paintings and stained glass windows. I first started painting saints as a response to the Catholic church's tirades and attacks on, and demonization of, gay people.

KC: You have painted many santos -- both official saints and made-up saints. Please tell about some of the gay saints in your paintings. 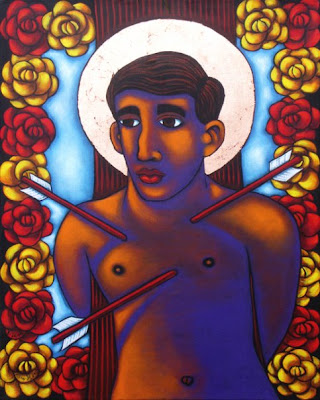 “Homage to Sebastian” by Tony De Carlo
I've also done a series of Saint Sebastian that I continue to add to each year, which now numbers 40+. I first started painting him in the 1980s as a response to the AIDS epidemic, and chose him because he was known as the Patron Protector Saint Against the Plague, as the Plague was sweeping Europe. It wasn't until the year 2001 when I went into a Catholic store in New Mexico, picked up a pewter statue of Saint Sebastian, and saw a label on the bottom that said "Patron Saint of Homosexuals". I knew then that it was official. I've also painted Saints Sergius and Bacchus, long rumored to have been lovers. And in my Dia de Los Muertos/Day of the Dead series, I've painted "real" saints like Santa Luz, Santa Sophia and San Antonio. 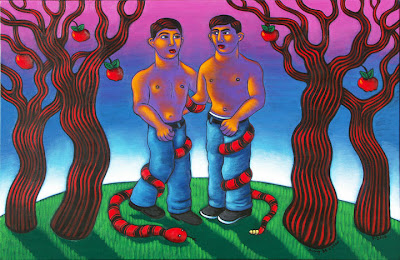 TDC: My Adam and Steve series, now number 20+, were initially a response to that ridiculous argument "God made Adam and Eve, not Adam and Steve" that I heard over and over from self-professed Christians. I know that gay people and their relationships are no less valid or worthy than anyone else's. I continue to add to this series a painting or two per year, often in domestic settings, with titles like "Adam and Steve At Home" and "Adam and Yves." 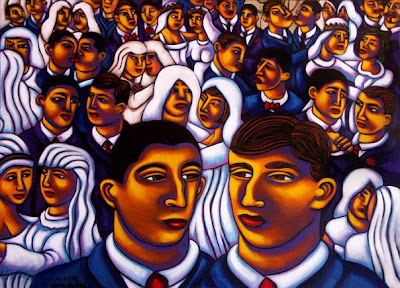 “End the Ban on Love” by Tony De Carlo
KC: Why did you decide to do a series of paintings on marriage equality?

TDC: This is another series I continue to add onto each year. The first in the series was painted in the early 1990s as a response to the discounting and dismissal, usually by religious people, of the love between two people because of their gender. I've tried to focus on the love and bond between the two people, instead of the hatred and bigotry of the others. 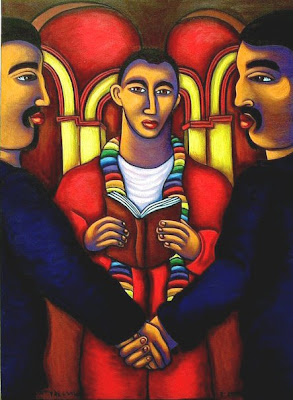 ”Life, Liberty And The Pursuit Of Happiness” by Tony De Carlo
KC: I see that you have exhibited your work in Latino Pride events and you paint some popular Mexican subjects such as Juan Diego.  What is your connection to Latino culture?

TDC: I painted a number of "San Juan" paintings years before he was officially bestowed sainthood by the Catholic church. Like gay marriage, I am happy I recognized the worth and value of this subject before the Catholic church did. I participated in the very first (and second) Latin Pride festivals in Los Angeles and most of the galleries and venues I exhibit at today are Latino.

KC: Has your art caused any controversy because of your gay-positive spiritual vision?

TDC: I have not heard any negative feedback from my Saints series of paintings, but my series of the Virgin of Guadalupe paintings and odd takes on her has caused a couple of people to confront me for my portrayal of her because she is such a revered image to some.

KC: Thank you, Tony, for sharing your art on the Jesus in Love Blog! Thank you, Stephen Mead, for introducing me to Tony’s art. 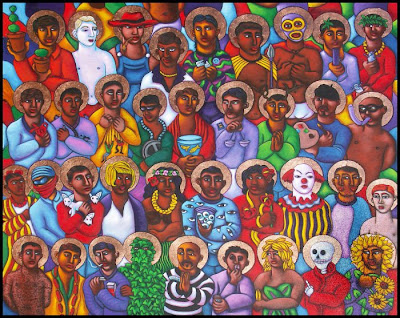 Adam and Steve by Toby Johnson

Posted by Kittredge Cherry at 11:49 AM

Love this interview, and went on Tony's Facebook page to say "HI". One more time, thanks for a fantastic post!

Thanks, Trudie! One thing I love about Tony's art is how positive and upbeat it is. That's unusual in queer Christian art. You both live in Georgia, so maybe you will get to see his art on exhibit someday.

Tony's message is: Love all freely

Welcome, Giomyart! I couldn't have said it better.


Rest in peace, Tony de Carlo. Many friends have enjoyed his art at the Jesus in Love Blog. I just learned that he died on Aug. 16 after a short illness. I’m still in shock, but I will be working on a tribute to this amazing artist.