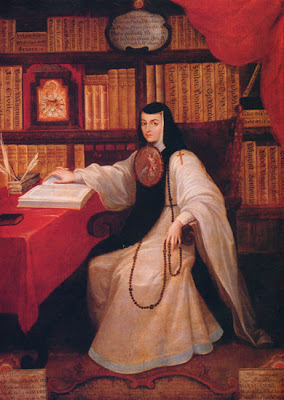 Posted by Kittredge Cherry at 8:22 AM

Her former convent, which I visited in the historic center of Mexico City, is now used by the Autonomous University of Mexico City for classes and offices. I think she would have loved that.

I am really looking forward to the Movie. Since Alicia is supervising, I am sure it will be true to the book, which I really enjoy.

Thanks, Mary, for the fascinating facts about the continued scholarly use of Sor Juana’s old residence. Trudie, it looks like the movie will be in Spanish, which is appropriate. But I hope it has subtitles!