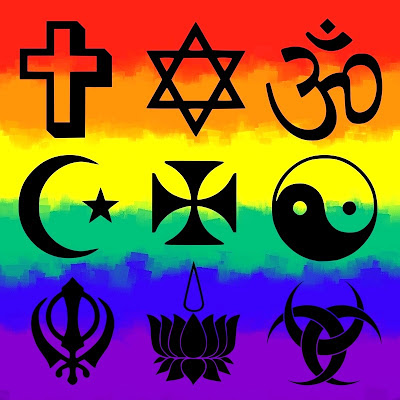 Queer religious art resources from Buddhism, Hinduism, Islam, Judaism, and Paganism are listed today on the Jesus in Love Blog.

The list provides dozens of links to art created throughout human history, from ancient cave paintings to the most contemporary images of today. It includes Asian, African / African-American, Australian, Celtic, Latina/o, Native American and more.

Usually LGBT Christian art is focus here, but today the attention shifts to other religions and spiritual traditions. The Jesus in Love Blog affirms the value of all faiths. The list is just an introduction to an enormous subject, so please leave comments with more suggestions.

This list took on a life of its own while I was researching it. One artist led to another and another. The lines between religions began to blur and overlap because cross-fertilization occurs between different traditions. Therefore some Christian art is included if it is expressed in a queer interfaith context.

Special thanks to Hugo Cordova Quero, adjunct faculty at Starr King School for the Ministry at the Graduate Theological Union in Berkeley, CA. This list was sparked by his request for help finding queer religious art to use when he teaches an online course on Queer Studies from a Multireligious Perspective in fall 2013.

Christian scriptures on interfaith religious tolerance are relatively rare, but many Bible verses do command people to love and care for strangers. In Acts 10:34-35 Peter said, “Truly I perceive that God shows no partiality, but in every nation anyone who fears God and does what is right is acceptable to God.”

Queer Spirituality Around the World (compiled by Marilyn Roxie)

Kukai (774–835), also known as Kōbō-Daishi, is a monk who founded Shingon Buddhism in Japan. He is one of Japan’s most beloved Buddhist figures, credited with everything from inventing the kana alphabet to introducing homosexuality to Japan. Kukai is shown with his male lover among the falling cherry blossoms in “Kukai” by Ryan Grant Long. It appears near the bottom of this article:
Artist paints history’s gay couples: Interview with Ryan Grant Long (Jesus in Love)

Photos of LGBT seders and/or pride minion such as this one:
http://jesusinlove.blogspot.com/2011/12/happy-hanukkah-from-jesus-in-love-blog.html


Queer Islam
Rumi is a 13th-century Persian poet and Muslim mystic whose love for another man inspired some of the world’s best poems and led to the creation of a new religious order, the whirling dervishes. See:
Rumi: Poet and Sufi mystic inspired by same-sex love (Jesus in Love)

Sultan Malek al-Kamil captured St. Francis of Assisi on a trip to Egypt. At first they tried to convert each other, but each man soon recognized that the other already knew and loved God. Francis stayed for almost three weeks discussing spirituality with the sultan and his Sufi teacher Fakhr ad-din al-Farisi. Artist Robert Lentz celebrates the meeting of Islamic and Christian leaders as a model of interfaith dialogue in the icon “St. Francis and the Sultan” at these links:
St. Francis: Loving across boundaries (Jesus in Love)

“St. Francis and the Sultan” with narrative by Robert Lentz (Trinity Stores)

Gay Mohammad images were censored in 2008 from a Dutch art exhibit. Iranian-born artist Sooreh Hera was forced into hiding by death threats from Muslim extremists. She says that her images are an artistic expose of Islamic hypocrisy on homosexuality. More info:
Gay Mohammad art censored (Jesus in Love)


Queer Hinduism
Many Hindu saints and deities transcend sexual and gender norms. Perhaps the most popular is Ardhanarishvara, who appears literally split down the middle as half male and half female. Get info and see images at these links:
Ardhanari at Qualia Encyclopedia of Gay Folklife:
http://www.qualiafolk.com/2011/12/08/ardhanari/

“Hindu Deities and the Third Sex” by Amara Das Wilhelm provides lots of info and images of Hindu deities, demi-gods and saints who embody the full spectrum of gender and sexual diversity, including but not limited to LGBT, queer and “third sex.” See it at the Gay and Lesbian Vaishnava Association website:
http://www.galva108.org/deities.html

Images of same-sex affection between Hindu deities and Christ (including “Jesus and Lord Rama” by Alex Donis) appear in:
What if Christ and Krishna made love? (Jesus in Love)

Queer Lady of Guadalupe: Artists reimagine an icon (Jesus in Love)
Art by Alma Lopez links Guadalupe to the Aztec mother goddess Tonantzin. Lopez has also done a painting of the Virgin of Guadalupe as Coyolxauhqui, the Aztec moon goddess who has been interpreted as a lesbian deity.

Aztec god Xochipilli is the patron of gay men:
http://en.wikipedia.org/wiki/Xochipilli

Haitian Vodou has many spirits that can be considered LGBT, queer, androgynous, dual-gendered, gender-fluid or otherwise queer. For example, Erzulie Dantor is the patron spirit for lesbians and is associated with the Black Madonna. Her more feminine sister Erzulie Freda protects and inspires gay men.
http://commons.wikimedia.org/wiki/File:DANTOR.jpg
(Note: I am working on an in-depth article about Erzulie Dantor and the Black Madonna. Suggestions welcome!)

Brigid and Darlughdach: Celtic saint loved her female soulmate (Jesus in Love)
Raised by Druids, Saint Brigid seems to have made a smooth transition from being a pagan priestess to a Christian abbess who loved another woman.

Welsh mythology includes a gender-bending queer shamanic story of incest, rape and shape-shifting with brothers Gwydion and Gilfaethwy. Their queer adventures are included in the Mabinogion, a collection of ancient Welsh myths and legends. Artist Andrew Craig Williams has illustrated, adapted, and reclaimed their story from a contemporary queer perspective:
http://www.behance.net/gallery/Blodeuben/292695
(The image of Gwydion and Gilfaethwy near the bottom was created this week specifically for inclusion on this links list.  Thanks, Andy!)

The Rabbit God from Chinese folk spirituality is considered the patron deity of the LGBT community. Info and images at Qualia Encyclopedia of Gay Folklife:
http://www.qualiafolk.com/2011/12/08/rabbit-god-temple/

Mary, Diana and Artemis: Feast of Assumption has lesbian goddess roots (Jesus in Love)
A mid-August holiday was once the festival of the Greek/Roman lesbian goddess Diana (Artemis), but it has been adapted into a feast day for the Virgin Mary.

Greek mythology has a wide variety of same-sex lovers, including Zeus and Ganymede,
Apollo and Hyacinth, and Dionysus and Ampelus. Get info and see images at:
LGBT themes in classical mythology (Wikipedia)
http://en.wikipedia.org/wiki/LGBT_themes_in_classical_mythology

Antinous, the young male lover of the Roman emperor Hadrian (AD 76-138), was deified after drowning in the Nile and honored with many statues, which are displayed online at:
http://www.antinoos.info

Lesbian Neopagan / Wiccan spirituality is often expressed in reverence for nature and the Divine Feminine, which is embodied in goddesses. Lesbians often connect with art that has a strong female, feminist or goddess emphasis rather than specifically lesbian content. For example, multicultural goddesses and imagined saints are illustrated by Sudie Rakusin, who has created art for various lesbian projects.  See her art at: http://sudierakusin.com/ Marie Cartier is a scholar, visual/performance artist, queer activist, writer and theologian whose visual art includes goddess imagery. Her website is: http://www.mariecartier.com/

Pagan artist Paul B. Rucker discusses his painting “Androgyne” in his essay “People of the Rainbow: Transgender in Magick and Ritual”:
http://paulruckerart.wordpress.com/essaysarticleshybrids/people-of-the-rainbow/

Guide to Tarot cards and decks that accommodate or celebrate LGBT or alternative sexual orientations:
http://www.aeclectic.net/tarot/cards/gay-lesbian.shtml

Australian Aboriginal spiritualities include an androgynous creator god known as the Rainbow Serpent, one of the oldest continuing religious beliefs in the world. Rock drawings of the Rainbow Serpent date back 6,000 years. The Rainbow Serpent connects with the symbolism of the LGBT rainbow flag. Image and info at:
http://en.wikipedia.org/wiki/Rainbow_serpent

I would also like to add to the list a wonderful Pagan lesbian artist and author, Dr. Marie Cartier. Her new book is on Amazon (Baby, You are my Religion: Women, Gay Bars and Theology Before Stonewall) and her wife, Kimberly Esslinger, is a queer filmmaker and Pagan as well. Highly recommend them both.

I was aware of Marie Cartier’s work on feminism, but thank you, NE Francis, for alerting me to her forthcoming book and her visual artwork. Here is a direct link to her book on Amazon:

Baby, You are my Religion: Women, Gay Bars and Theology Before Stonewall

It will come out, appropriately enough, on Oct. 31.

I will also add Marie to the main blog article on queer religious art… and spend some more time on my own exploring her website, http://www.mariecartier.com/.