Our Lady of Guadalupe brings a message of holy empowerment that speaks to LGBTQ people -- and angers Christian conservatives. Queer art based on Guadalupe is shown here for her feast day today (Dec. 12). She is an Aztec version of the Virgin Mary that appeared to Aztec peasant Juan Diego outside Mexico City on Dec. 12, 1531.


For a new version of this article, click this link to Qspirit.net:
Queer Lady of Guadalupe: Artists re-imagine an icon

In Juan Diego’s vision, the dark-skinned Virgin of Guadalupe spoke to Juan Diego in Nahuatl, the Aztec language, addressing him as if he were a prince. It was astonishing because Mexico had been conquered 10 years earlier by Spaniards who claimed to have the one true faith. Following her instructions, he gathered roses in his cloak. An icon of her, looking just as Juan Diego described, was imprinted on the cloak as a miraculous sign. Our Lady of Guadalupe became a popular symbol of dignity and hope for the native people of Mexico, and by extension to indigenous or oppressed people everywhere.

The hill where Juan Diego had his vision used to be the site of an ancient temple to the Aztec mother goddess Tonantzin. Her temple was destroyed by the Spanish conquistadors. Our Lady of Guadalupe (in Spanish Nuestra Señora de Guadalupe or Virgen de Guadalupe) asked for a church to be built in her honor right there, among the conquered people. That shrine is now the most popular Catholic pilgrimage destination, receiving more than 6 million visitors per year.

Even standard icons of Guadalupe are subversive because they show the Virgin as a dark-skinned Mexican, challenging the Euro-centric images of her as a blue-eyed white lady. The foremothers of the Mexican Guadalupe include the Black Madonnas, especially the medieval Spanish Our Lady of Guadalupe in Extremdaura, Spain. 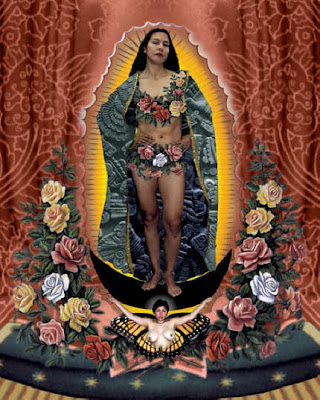 “Our Lady” by Alma Lopez

Erotically alive, feminist and lesbian versions of Our Lady of Guadalupe are a common theme in the art of Alma Lopez, a Chicana artist and activist born in Mexico and raised in California. A huge controversy erupted over her “Our Lady,” a digital print showing the Virgin of Guadalupe in a bikini made of roses, exalted by a bare-breasted butterfly. Lopez says she intended it as a tribute to Our Lady, “inspired by the experiences of many Chicanas and their complex relationship to La Virgen de Guadalupe.”

Death threats, censorship efforts, and violent protests brought national and international attention to Lopez’ “Our Lady” over the years as artistic freedom clashed with freedom of religion. In one of the most recent conflicts, thousands of negative messages compromised the email system of an Irish university that dared to exhibit it in 2011. (For details, see my previous post Our Lady and Queer Saints art attacked as blasphemy - Show support now!).

In 2001 Catholic authorities tried to have Lopez’ “Our Lady” removed from an exhibition at the Museum of International Folk Art in Santa Fe. The debate is covered in the 2011 book “Our Lady of Controversy: Alma Lopez’s ‘Irreverent Apparition

.’” from University of Texas Press. The anthology is edited by Alma Lopez and Alicia Gaspar de Alba. The two women were married in 2008, during the first brief period when same-sex marriage was legal in California.

The Aztec moon goddess Coyolxauhqui has been interpreted as a lesbian deity by Chicanas such as writer-activist Cherrie Moraga. Lopez paints Coyolxauhqui, machete in hand, as Guadalupe in the image at the top of this post: “Coyolxauhqui Returns as Our Lady disguised as La Virgen de Guadalupe to defend the rights of Las Chicanas.” 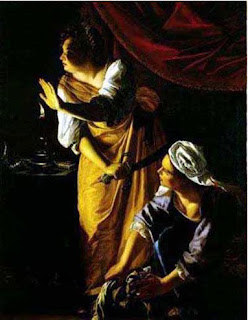 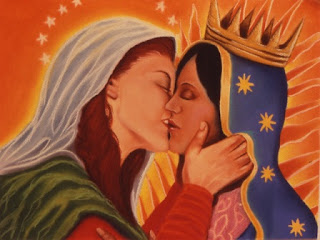 “Mary Magdalene and Virgen de Guadalupe” (from “My Cathedral”) by Alex Donis
Alex Donis painted the Virgin of Guadalupe kissing Mary Magdalene as part of “My Cathedral,” a series that showed people of opposite viewpoints kissing in same-sex pairs. Donis was familiar with contradictions from his own “tri-cultural” identity: pop, queer, and Latino. Born to Guatemalan parents, he grew up in East Los Angeles.

His “My Cathedral” exhibit caused a frenzy when it opened in San Francisco in 1997. Heated arguments erupted in the gallery, followed by threatening phone calls and letters. Vandals smashed two of the artworks: Jesus kissing the Hindu god Rama, and guerilla leader Che Guevara kissing labor organizer Cesar Chavez. Most people overlooked his painting of Guadalupe kissing Mary Magdalene, but it remains a potent, beautiful expression of the union of sexuality and spirituality. It is included in the book “Art That Dares: Gay Jesus, Woman Christ, and More

De Carlo, who died in 2014, was a native of Los Angeles. His work is exhibited regularly in museums and galleries throughout the United States.For more on Tony De Carlo and his art, see my previous post: Gay saints, Adam and Steve, and marriage equality art affirm LGBT love: Tony De Carlo Interview.


Jim Ru painted a bearded drag queen version of the Virgin of Guadalupe. Titled “Virginia Guadalupe,” the painting was displayed in his show “Transcendent Faith: Gay, Lesbian and Transgendered Saints” in Bisbee Arizona in the 1990s. He discusses it in a 2015 video. 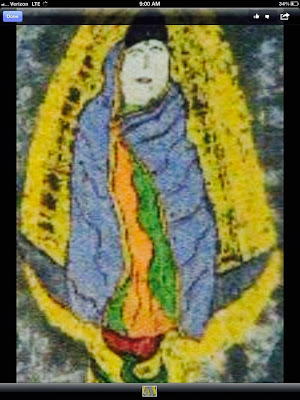 These bold paintings certainly give new meaning to the title bestowed upon Guadalupe by Pope Pius XII: “Queen of Mexico.” If the Virgin Mary could appear to an Aztec as an Aztec, then why not show up to a queer as a queer?

Guadalupe tends to dominate discussions of Latina/o depictions of Mary, but other icons of the Virgin tend to be more important outside Mexico, such Our Lady of Lujan in Argentina. And artists are making queer versions of these other Virgins too. For example, Giuseppe Campuzano (1969-2013) of Peru cross-dressed as Our Lady of Sorrows in art portraits that appear in his book “Museo Travesti del Peru (The Peruvian Transgender Museum).”
___
Related links:
Virgen de Guadalupe Contemporary Art (Feminist Texican)

To read this post en español, go to Santos Queer:
La Virgen de Guadalupe Queer: Artistas reinventan un icono
___
Books with liberating views of the Madonna:
“Mother of God Similar to Fire” with icons by William Hart McNichols and reflections by Mirabai Starr presents a wide of variety of liberating icons of Mary, including a black Madonna. McNichols is a New Mexico artist and Catholic priest who has been rebuked by church leaders for making icons of LGBT-affirming martyrs and saints not approved by the church.

“Goddess and God in the World: Conversations in Embodied pillow in the Theology” by Carol P. Christ and Judith Plaskow. Two pioneering leaders in the study of women and religion discuss the nature of God / Goddess.

Various icons of Our Lady of Guadalupe and many others are available on cards, plaques, T-shirts, mugs, candles, mugs, and more at Trinity Stores

_________
This post is part of the LGBTQ Saints series by Kittredge Cherry. Traditional and alternative saints, people in the Bible, LGBTQ martyrs, authors, theologians, religious leaders, artists, deities and other figures of special interest to lesbian, gay, bisexual and transgender and queer (LGBTQ) people and our allies are covered.

Posted by Kittredge Cherry at 7:31 AM