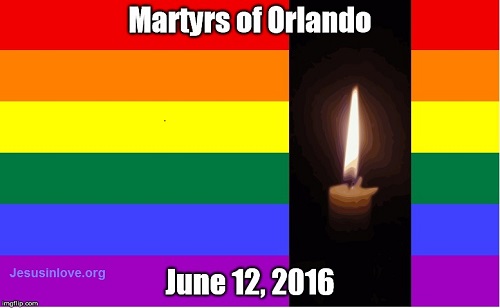 In memory of
50 who died at the Pulse
gay nightclub Orlando, Florida

I light a candle for the 50 people killed and 53 injured in a mass shooting at the Pulse, a gay nightclub in Orlando, Florida today on June 12. It is being called an act of terrorism and the worst mass shooting in U.S. history.

According to news reports, the gunman pledged allegiance to Islamic State around the time he stormed the packed nightclub. He was killed by police after taking hostages.

It is not yet confirmed whether the killer targeted the club because it served the LGBTQ community. But the massacre is a grim reminder of the ongoing violence faced by LGBTQ people.

The shooting occurred on “Latin night” at the Pulse nightclub, and more than 90 percent of the victims were Latino. The mass murder in Orlando will likely become a watershed event in the evolution of LGBTQ Latino/a consciousness too.

Until now the deadliest U.S. attack on LGBT people was the UpStairs Lounge fire, which killed 32 people in New Orleans in 1973.

Sadly the mass murder in Orlando comes just as the LGBTQ community is celebrating Pride Month, which marks the 1969 rebellion at another gay bar: the Stonewall Inn in New York City.

As the news continues to unfold about the Orlando shooting, let us remain rooted in love. May God comfort those who mourn, heal the injured, guide the search for answers and touch those with violence in their hearts. May we come together to affirm that love is stronger than hate.

Martyrs are those killed for a cause. May the souls of those killed in Orlando be welcomed to heaven by history's many queer martyrs who were killed for their sexual orientation or gender expression.

Litany for Orlando by Yvonne Aburrow (Dousing for Divinity)

Pulse: The Orlando Shooting and the Intersection of Multiple Violences by Hugo Córdova Quero (gemrip.org)

Posted by Kittredge Cherry at 6:11 PM

All you Holy Martyrs, pray for us.