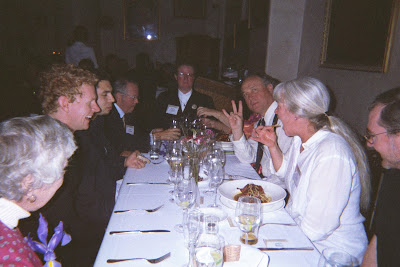 The Festival of Progressive Spiritual Art was one of the highlights of JesusInLove.org's first 3 years
Today JesusInLove.org celebrates its third anniversary as an online resource for GLBT spirituality and the arts. We have presented a positive vision of gay, lesbian, bisexual and transgender spirituality and tracked censorship of queer religious art for three years now. I founded JesusInLove.org because Christian rhetoric was being misused to justify hate and discrimination against LGBT people, but Jesus taught love for everyone, including sexual outcasts. I hoped to stimulate dialogue and consciousness of love and that has happened over the last three years. JesusInLove.org has taken off and become important in the world. JesusInLove.org was launched on Nov. 17, 2005 with a news release titled “New Website Dares to Show Gay Jesus.” Since then it has reached thousands of people all over the world and co-sponsored the first National Festival of Progressive Spiritual Art. Jesus in Love has grown from a single website into an online network that includes this blog, videos, e-newsletter and an image archive. We have won many honors -- and we also get a lot of hate mail from conservative Christians. A typical comment is, “Gays are not wanted in the kingdom of Christ! They are cast into the lake of fire.” Right-wing Christian bloggers labeled me “a hyper-homosexual revisionist” and denounced my projects as “garbage,” “insanity,” and “a blatant act defamation and blasphemy.” The ongoing religious bigotry proves that JesusInLove.org is needed now as much as ever. We will continue to promote spirituality and the arts for GLBT people and their allies by displaying and discussing art on progressive religious themes. We are dreaming of new ways to follow our vision, including the following: • Sponsor a contest of GLBT and/or progressive spiritual art with cash prizes and a well known judge. Winners can be displayed online, made into a calendar, even shown at a gallery. There are many possibilities. • More complete tracking and reporting of censorship of GLBT religious and spiritual artistic/literary expression. This aspect of JesusInLove.org generates a lot of inquiries and interest. • Build an archive of GLBT religious and spiritual images with permission from each artist for use -- acting as agent for the artists and possibly collecting fees for them. JesusInLove.org already gets many permission requests from people who want to use the images. I’d love to hear what others think of these projects, and what your dreams are. Please contact me or leave a comment. The first JesusInLove.org news release from the original launch is available in the Jesus in Love media room, along with other major news releases from the past three years.
Posted by Kittredge Cherry at 2:00 PM

Congrats! I whole-heartedly support your vision for the future of JesusInLove.org.

Thanks, Scott! It's great to hear from you!

Wow, has it been three years already!?

Congratulations on a superb uplifting website. It's about protest and civil rights, but it's also about inspiration and being visionary queer people!