A queer version of Christ’s Passion is running in daily installments this week from Palm Sunday through Easter. Each daily post features a queer Christian painting and an excerpt from the novel Jesus in Love: At the Cross


Whatever semi-disembodied state I was in, Satan was there, too. I was keenly aware of my body struggling against his. We were evenly matched in size and muscle. Judas’ corpse swung above us as we wrestled and punched each other. My lust for vengeance was an insatiable itch that made me want to scratch his eyes out and kill my enemy. I managed to pin Satan to the ground. He lay on his back with me on top, ready to strangle him. I wrapped my hands around his throat and squeezed. I was going to throttle the life out of Satan. That would stop him for good.

Just then he laughed with sheer delight. He wanted me to hit, hate, and kill him. He would never have come close enough to touch if he thought there would be any other outcome.

That ghastly laugh made me stop and remember who I was. Satisfying Satan horrified me. So did killing Satan, or killing anyone, even myself. In an extreme exercise of will, I relaxed my fist and stroked his leathery cheek and neck. Transcending myself like that required more strength than I thought I had.

Satan couldn’t help enjoying the touch. He turned his head and kissed my hand once shyly to let me know he wanted more. I caressed his invisible face again. He was hairy with a beard like mine. In fact, I noticed that his whole face was almost exactly like mine.

I found that I still had the power to whisper, “I forgive you, Brother. And I forgive myself.”

I broke the law of cause and effect that I myself had set up at creation, and a burst of energy was released. I was just as angry at Satan, but I gave him love anyway—something completely different from the worship that he had sought from me. My love was tough enough to withstand even the ongoing war between us. I reached a state of inner balance. If I was only human, I
would have been too weak to resist Satan, and yet without my humanity I would have lost, too, for my divine heart would not approach a sinner as vile as Satan. Loving in this way actually gave me more strength, although I found that I no longer needed to use it. Satan was resting peacefully beneath me.

“It is finished,” he announced.

“I release you. You win—this time.” He pushed me away.

The small amount of love that we exchanged was enough to topple his kingdom. I hurtled back toward the realm of solid light. I careened through a galaxy where the name of every human soul was spelled out in starlight, purging sin from human cellular memories as I went. The souls came untangled. In their newfound freedom, they looked to me like an omni-dimensional tapestry of stars shooting beams of energy, one to another. Each human soul chose to send its energy to every other soul, with the love between them lasting always.

In a flash, I comprehended a great truth: Once you love someone, that love lasts forever in the universe. Love never ends. Satan’s big lie was that hatred, fear, sin, and death can sometimes conquer love. No. Time makes them fade, while love endures forever. Love—love in any form whatsoever, any love that is ever loved—remains and is gradually filling the vast expanse of the universe. 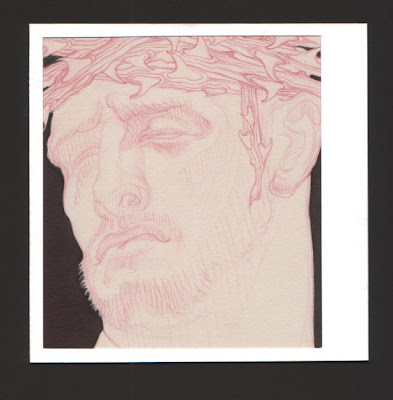 Just home from an all-night prayer vigil at FMCC, during which I re-read parts of "At the Cross", and of course this -- my favorite passage -- was one of them. I'm so glad you used this, and Corinne's art goes perfectly with it.

Thank you very much for the e-mail that you enjoyed this piece. I have a second version of this too for more deep feeling, but I am happy with this one too and I appreciate you using this piece for your article! Thank you for the post, I find your blog intriguing and most educational for those who are part of the LGBT community. :D

Kittredge Cherry said...
This comment has been removed by the author.
11:04 AM