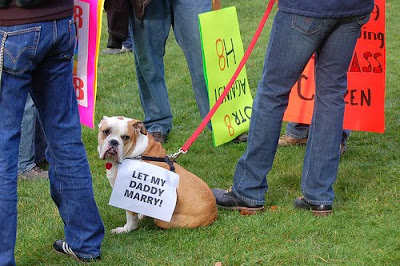 “Let my daddy marry,” says a bulldog at a Seattle march to protest the Prop 8 ban on same-sex marriage.
http://www.flickr.com/photos/subsetsum/ / CC BY-NC-ND 2.0

Some people are taking their pets to be blessed at Earth Day celebrations today. I wrote an Animal Blessing Service for “Equal Rites: Lesbian and Gay Worship, Ceremonies, and Celebrations

For a new version of this article, click this link to Qspirit.net:
Earth Day: LGBTQ theologians join in protecting the environment

Animals are important in the lives of many lesbian and gay people. Cats and dogs often become surrogate children for same-sex couples. The health benefits provided by living with an animal companion are well-known, and in several cities gay and lesbian people have helped create unique organizations such as PAWS (Pets are Wonderful Support) dedicated to enabling people with AIDS to keep their pets.

On a more philosophical level, the discrimination faced by lesbian and gay people is linked to attitudes that devalue animals and the rest of nature. Western thought sets up dualities in which spirit is better than body, male is better than female, human is better than animal, intellectual is better than sexual -- and sexuality defines gays and lesbians in this way of thinking. Gays and lesbians, like nature itself, are seen as something that must be controlled. The result is a sterile, exclusive church and a polluted earth. Many lesbians and gay men seek to remedy this situation by healing the spirit-body split in Christianity. For all these reasons, it is appropriate to bless animals in the context of lesbian and gay spirituality….

May we remember that humanity is but one small, fragile strand in the interdependent web of life.

May we remember that we human beings are not the only ones created to look at flowers, to taste cool water, to listen to the wind, and to feel the earth beneath our feet.

May we remember that what befalls the earth befalls all who live on her lovely shores.

May we never forget that to harm the Earth is to scorn the Creator.

We pray for the animals who are our companions.

We pray for the wildlife displaced as we develop land for human use.

We pray for the animals who work for us, including the seeing-eye dog, the carriage horse, and the laboratory rat.

We pray for animals indigenous to this particular place, including [name a few species].

We pray for the animals who have made our lives possible by becoming food and clothing for us.

We pray for endangered species, including the giant panda and the California condor, and we remember the dinosaurs, passenger pigeons, and other extinct species.

We pray for all human beings who have felt degraded by being compared to animals.

God, we know that you hear all or prayers, those spoken and those that we hold silently in our hearts. We claim your loving presence with us now.
Posted by Kittredge Cherry at 12:01 AM

Delightful blog. I just visited the Animal Rescue site as I do every day for the "free click" donation, but this time I actually bought something -- a pair of running shoes since I'm trying to exercise. That's my honoring of Earth Day and a donation to the animals as well. Blessings.

Thanks, Trudie. You're already doing something special for the animals with your pet portraits ministry, too. Walking is a real spiritual practice for me.

This is a lovely post. I hadn't thought of the connections you describe before. Thank you.