Day 5: Jesus is sentenced to death 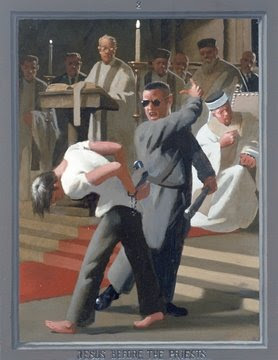 Jesus Before the Priests (from The Passion of Christ: A Gay Vision)

by F. Douglas Blanchard
A queer version of Christ’s Passion is running in daily installments this week from Palm Sunday through Easter. Each daily post features a queer Christian painting and an excerpt from the novel Jesus in Love: At the Cross


“We are gathered today to hear testimony on capital crimes committed by Jesus of Nazareth. Will the first witness please come forward?” Caiaphas tended to speak quickly, with an upper-class Jerusalem accent.

As the first witness swaggered to the front of the room, I saw that his soul had enchained itself by subjugating others, much like the soul of Annas.

“Pimp.” He said it in the same offhand manner that he had used back when I liberated Mary from his brothel.

“What can you tell us about Jesus?”

Everyone leaned forward and pricked up their ears. They knew his testimony would go far beyond describing straight sex with a prostitute. That wasn’t even a minor crime for a bachelor like me.

“Jesus is queer,” Reuben stated. “It’s his duty to raise up children for the people of Israel, but he hasn’t even gotten married.”

Caiaphas frowned. “That’s certainly perverse, but there’s no law against it.”

“You misunderstand me. Jesus has lain with a man as with a woman.”

The level of fear in the room ratcheted up a notch, especially among the men who had experienced or fantasized about that forbidden pleasure.

Caiaphas pounced on the charge. “You have witnessed the abomination?” he asked, so eager that his mouth was watering.

Reuben slid his eyes over me in a calculating way without meeting my gaze. “Well, anyone can tell by the way that he looks at other men and greets them with hugs and long kisses.”

… Annas hissed at his son-in-law, “What do you think you’re doing? The charge is supposed to be blasphemy.”

“It’s not usually enforced, but there’s a law on the books that allows us to put a man to death for this kind of abomination,” Caiaphas explained in a hushed voice.

“Perhaps on the old Jewish law books!” Annas snorted. “Have you forgotten that Rome doesn’t allow us to impose the death penalty anymore? We can’t count on the Romans to crucify him for the abomination between men. Their own gods and emperors shamelessly commit the same indecent acts! Keep the focus on his claim to be Messiah. We can twist that into a treason charge.”

… “I order you to tell us under oath before the living God: Are you or are you not the Messiah, the Son of God?” Caiaphas demanded.

“I am, and you’ll see the Son of Man sitting at the right hand of the Almighty, and coming with the clouds of heaven,” I replied.

A shockwave passed through the room.

Caiaphas ripped his robes as if he were grievously offended, but he was grinning in triumph. “He has blasphemed! Why do we still need witnesses? You’ve heard his blasphemy now. What’s your verdict?” he cried.

“He deserves the death penalty,” the members of the Sanhedrin yelled back…. “Kill the blasphemer! Faggot! Leper lover!”

(Continued here tomorrow)
___
F. Douglas Blanchard is a New York artist who teaches art at City University of New York and is active in the Episcopal Church. Much of his art explores history, including gay experience.
Posted by Kittredge Cherry at 12:01 AM