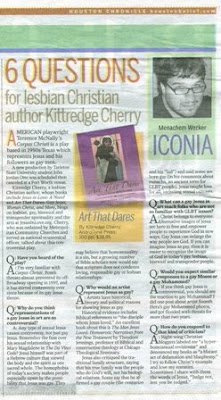 “7 questions for lesbian Christian author Kittredge Cherry on Corpus Christi” is posted today at Houston Chronicle. (A shorter version with 6 questions was published in the print newspaper, pictured above.)

They interviewed me about gay Jesus themes and the play “Corpus Christi,” which is sparking controversy now in Texas. News reports say that a Fort Worth production was scheduled, then cancelled, then rescheduled yesterday at another local theater.  Here is a highlight from the interview:

Houston Chronicle: Why do you think representations of a gay Jesus in art are so controversial?

Kittredge Cherry: ANY type of sexual Jesus causes controversy, not just gay Jesus. Remember the fuss over his sexual relationship with Mary Magdalene in "The Da Vinci Code"? Mainstream Christianity has become a rather sex-negative religion, due to Western influences in the first few centuries after Jesus died. Jesus himself was part of a Hebrew culture that viewed the body and the spirit as one sacred whole. The homophobia of today's society makes people especially upset by the possibility that Jesus was gay. They may believe that homosexuality is a sin, but a growing number of Bible scholars now recognize that scripture does not condemn loving, responsible gay or lesbian relationships....

Click here for the whole interview at the Houston Chronicle. You can leave a comment there to encourage more coverage of LGBT spiritual subjects.

The interviewer was artist and art critic Menachem Wecker. His blog, Iconia, is a timely and insightful mix that explores “wherever faith meets art.”
___
P.S. on April 14, 2010:

I heard today that my interview is scheduled to run in the Houston Chronicle’s print newspaper this Friday, April 16, in the religion section.

There are now 20 comments pro and con at Chron.com about my interview, including quite a debate over this ignorant statement: “The son of God would not be imperfect, therefore the Jesus could not be a homosexual.”

Special thanks to Edmund in Houston for mailing a copy of the print newspaper to me.
Posted by Kittredge Cherry at 11:50 AM

Kitt, I was on retreat when this was posted, so didn't get a chance to read and respond right away. It is a delightful interview. However, I found one question and answer fascinating -- the one about the reaction to a possible Gay Mohammad. The significant difference, of course, is that Christians believe that Jesus is God made flesh, whereas the Muslims perceive the Prophet as strictly human. God incarnate would by necessity have to represent the totality of human possibilities, as your novels so clearly illustrate. That is why, of course, your development of this concept is such a quantum leap of spiritual growth for our time.

As you so vividly explain, also, Jesus did NOT marry and procreate, whereas both Moses and Mohammad did. So truly, it is the entire issue of sexuality, not merely sexual orientation, that needs to be confronted in our perception of the Christ.

Yes, Trudie, you’re absolutely right that a gay Jesus is more radical than a gay Mohammad or gay Moses because Christians see Jesus as God incarnate, while Moses and Mohammad are acknowledged to be human by even their most devoted followers.

And yet -- based on the email and comments I get -- Muslims seem more riled up by the idea of a gay Mohammad than Christians are about the gay Jesus. Maybe there’s more understanding among Christians about homosexuality, or at least an attempt to “love the sinner.”

I did a Google search for “gay Moses” for the interview, but didn’t come up with much.

Whether the Muslims are more anti-gay than anyone else, they certainly do seem to be much more hypersensitive about perceived "insults" to the Prophet. I recall the recent threats about the Danish cartoon that depicted him with a bomb wrapped in his turban.

I still think it is extremely important to keep refocusing the discussion on the overall issue of sexuality, as you did so effectively both in "Jesus in Love" and the recent conversations on eroticism and spirituality in general. Thanks again for the clarity.

I recently watched an excellent documentary called “Bloody Cartoons” about that Danish cartoon and the riots that it caused. I was surprised to learn that 150 people died in the violence sparked by those cartoons -- almost all Muslims. What a tragic waste of human life. They interviewed Muslim clerics who claimed that they were not responsible, even though they had spoke in favor of killing and violence. Very disturbing.

I’m glad you appreciate my focus on sexuality. When the Houston Chronicle asked “Why do you think representations of a gay Jesus in art are so controversial?” I almost launched into naming homophobia as the source, but then it was like a light bulb went on in my mind and I saw that the root is deeper.

However, homophobia is alive and well in the negative comments now posted with the interview at chron.com. There are now 20 comments pro and con there, including quite a debate over this ignorant statement: “The son of God would not be imperfect, therefore the Jesus could not be a homosexual.”

I agree with the person who replied, “The Jesus I know could be gay, and perfect.”

I heard today that my interview is scheduled to run in the Houston Chronicle’s print newspaper this Friday, in the religion section.