Mary Daly: Lesbian philosopher who went Beyond God the Father 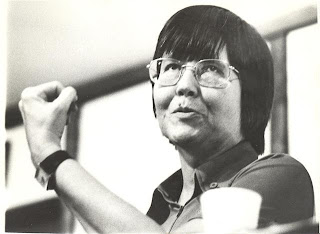 Daly is known for her strong critique of patriarchy, especially the Roman Catholic Church. She was an early and original feminist thinker.

Born in 1928 and raised Roman Catholic, Daly was educated in Catholic schools and earned Ph.D.s in English, theology and philosophy. She taught at Boston College from 1967 to 1999. She died in January at age 81.

Her books include “The Church and the Second Sex

” (1968) and “Beyond God the Father: Toward a Philosophy of Women's Liberation

“If God is male, then male is God. The divine patriarch castrates women as long as he is allowed to live on in the human imagination.”

Posted by Kittredge Cherry at 2:15 PM

Aw, yay! So glad women and men get to witness the event together around the globe! I have a blogger friend from South Africa who has already registered to watch it too. :)

I've already gotten 3 nice responses from women through Facebook, where I posted Mary Daly's memorial info last night. Thanks, Xochitl, for sharing the info and the spirit of this powerful event.

Brad, I hope you meant that as a compliment. Mary Daly was instrumental in reclaiming misogynist slurs such as "hag" and turning them into positive names of power.

Mary Daly's memorial webcast was wonderful and also sad too. I felt a kind of passing of an era that was powerful for women.

The mystery remains as to why Mary stayed in that rotten catholic institution, when she had the connections to build her own school, but perhaps what she could do was fuel the energy to reveal patriarchy and all its evil from the inside. Yet still, I wonder.

Turtle Woman, I also wonder why Mary Daly stayed at Boston University, fighting the system when she could have spiraled beyond it.

Watching the webcast was almost like being there. During the memorial service, I was impressed by the role Mary Daly played as a warrior-woman who had to be blunt and tough to break down church barriers against women in the 1960s and 1970s.

It was an unusual group of speakers, ranging from show biz comedian Roseanne Barr to academic luminaries. I especially appreciated the video tribute by Kate Clinton.

Boston College, not Boston University! Get your facts straight!

Well, I got "Boston College" correct in my article, but not in my comment. Thanks for pointing out the error. I don't see a way to edit my comment, so please accept my apology here.