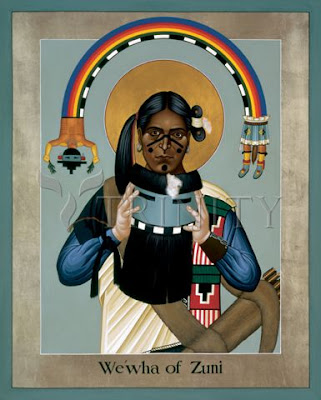 “We’wha of Zuni” by Br. Robert Lentz OFM, TrinityStores.com
We’wha was a two-spirit Native American Zuni who served as a cultural ambassador for her people, including a visit with a U.S. president in 1886. Contributions of Native Americans are remembered today for Columbus Day. Today We’wha is honored by many, including Native Americans and LGBT people.

Almost all Native American tribes traditionally recognized third and sometimes even fourth genders for people who mixed male and female characteristics. Today the many and varied Native American terms for alternative genders are called “two spirit,” because one body housed both feminine and masculine spirits. From a Western cultural viewpoint, they have been seen as gay or transgender.

We’wha (pronounced WAY-wah) was the most famous “lhamana,” the Zuni term for a male-bodied person who lived in part as a woman. Lhamanas chose to specialize in crafts instead of becoming warriors or hunters.

The spiritual side of We’wha is emphasized in an icon by Brother Robert Lentz (above). She is dressed for a religious ceremony as she prepares to put on the sacred mask of the man-woman spirit Kolhamana.

Jim Ru painted We’Wha in an icon (below) with a dramatic blue background. It was included in his show “Transcendent Faith: Gay, Lesbian and Transgendered Saints” in Bisbee Arizona in the 1990s. 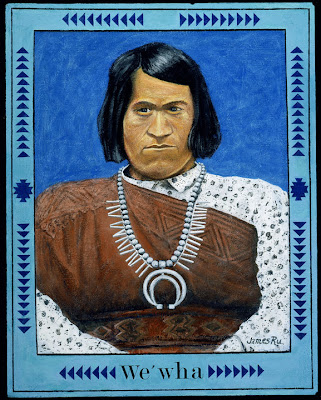 “We’wha” by Jim Ru
_________
This post is part of the GLBT Saints series by Kittredge Cherry at the Jesus in Love Blog. Saints, martyrs, mystics, heroes, holy people, deities and religious figures of special interest to lesbian, gay, bisexual and transgender (LGBT) and queer people and our allies are covered on appropriate dates throughout the year.

Posted by Kittredge Cherry at 10:38 AM