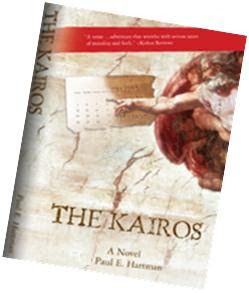 A new novel with a gay Jesus theme is coming out today for National Coming Out Day. “The Kairos

” by Paul Hartman is a suspense novel in which Dead Sea Scrolls name Jesus’ life partner John and spark a deadly chase. It’s a wild ride that reads like a gay version of “The DaVinci Code.”

The author is a Presbyterian elder and retired PBS / NPR broadcast executive and on-air personality.  An interview with him will be posted soon here at the Jesus in Love Blog.

Here is the official description of the book from the author’s website:


In 1991 Dr. Lute Jonson, one of two co-directors of the Dead Sea Scrolls International Study Team in Jerusalem, decides to reveal explosive news contained in 2000-year-old fragments he and his friend and co-director Father Sean O’Derry have kept secret for 40 years. The seven fragments contain carbon-dated evidence of where the teenaged Jesus of Nazareth lived, and who He loved. Fr. O’Derry vehemently objects to their release, arguing that the faith of a billion Christians could be destroyed if this “spiritual virus” were released. Lute steals the originals and escapes to America to make the announcement. A deadly global chase ensues, leaving a wake of astounding revelations about a new kairos, a new “breakthrough by God into human time.” The Kairos is a suspense novel with a sexual subject that’s timely and a human-spirit theme that’s timeless.” 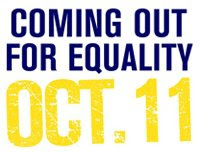 Coming out the closet as a lesbian played a huge role in my life, so I celebrate National Coming Out Day today with a video, links, prayer and book except.

Ever since National Coming Out Day was founded in 1988, LGBT people have been encouraged to come out and be honest about themselves on Oct. 11. In recent years the scope has been broadened.

“Whether you’re lesbian, gay, bisexual, transgender or not, be proud of who you are and your support for LGBT equality this Coming Out Day!” says the Human Rights Campaign, which manages the event.

I wrote about the process in depth in my book Hide and Speak: A Coming Out Guide

, which is also available in a Polish translation.

My book Hide and Speak tells positive ways to come out to yourself, create a circle of supporters and deal with family, job and school. Each chapter includes real-life examples and tested, highly effective exercises that I used in coming-out workshops nationwide. Readers will learn how to live proud, free and balanced.

Here is an excerpt from Hide and Speak:

“Many people, myself included, assumed that LGBT visibility would make books like this obsolete. That day is still well in the future. The difficulties of coming out in the twenty-first century hit home for me recently when a younger relative finally told me he was gay. His big sister, a lesbian activist, had come out to the family twenty years before, but her example didn’t seem to make it any easier for her brother. “It was something I had to figure out and deal with on my own terms,” he explained to me. The newly visible LGBT community is no more appealing to him than the old stereotypes had been to me and my peers.”

I reflect on my own coming out process in the short video below. It’s still my most popular video, with 2,755 views. I made it for the Human Rights Campaign’s 2007 video contest.

I’ll close with an excerpt from a Coming-Out Liturgy by Malcolm Boyd, from the book Equal Rites: Lesbian and Gay Worship, Ceremonies, and Celebrations


“Leader: Have you been forced to play a dishonest role in order to survive?

Participant: I have. My family seemed often to require it, at least to desire it. At school it was necessary, and whenever I dropped my mask I was punished. The same was true of my life at work where I sought acceptance and advancement. What I had to confront made me feel confused, emotionally fatigued, and often worthless. Any kind of a relationship posed a threat and a danger. I wondered how much rejection I could stand. When I reached out for understanding or help, I usually received yet another rebuke. However, I just could not be who I'm not. It nearly killed me when I tried so hard and found it hopeless.

Community: We offer you validation for yourself as you have been created and celebration of your gayness as a gift of God.”

Posted by Kittredge Cherry at 8:44 AM