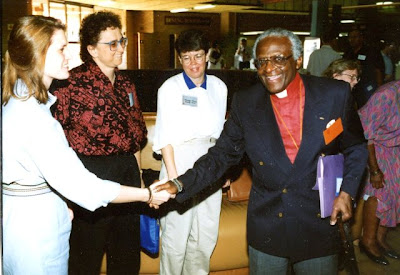 MCC was founded 43 years ago today on Oct. 6, 1968 to preach God’s love for LGBT people back when homosexuality was still considered a sin, a sickness and a crime. Tutu was born Oct. 7, 1931. He is a Nobel-Peace-Prize-winning human rights activist and Anglican bishop from South Africa.  He turns 80 years old.

Every year on MCC’s anniversary I try to scan and post at least one “new” historic MCC photo that has never appeared online before.

The photo above shows, from right, Tutu, MCC National Ecumenical Officer Kittredge Cherry, MCC Chief Ecumenical Officer Nancy Wilson, and an unknown woman. The MCC delegation was in Johannesburg, South Africa in January 1994, to advocate LGBT religious rights at a meeting of the World Council of Churches. Wilson was elected Moderator of the MCC denomination in 2005 -- the same year that  Cherry launched Jesus in Love.

Click here to see more photos from MCC history in the Jesus in Love image archive. It’s important to preserve our history. So I post these images as a tribute to all queer people of faith who dare to believe that God loves us just as we are.

Posted by Kittredge Cherry at 11:51 PM