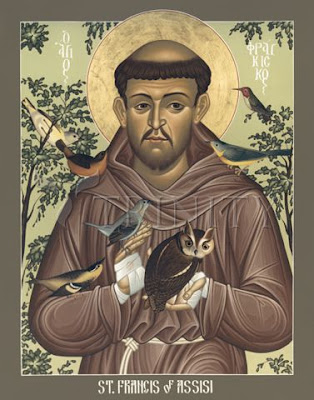 “St. Francis of Assisi” by Brother Robert Lentz, OFM, trinitystores.com
St. Francis of Assisi was a universal person whose extravagant love crossed many boundaries. The 13th-century saint is well known for talking with animals and hugging lepers, but he also befriended an Islamic sultan.

For a new version of this article, click this link to Qspirit.net:
Francis of Assisi: Queer side revealed for saint who loved creation, peace and the poor

St. Francis has inspired many LGBT people and our allies, although he is not considered to be a “gay saint” himself. Artists have explored his loving connections with men and even his sensual side. In honor of his feast day today (Oct. 4), we are highlighting a few of the many faces of St. Francis.

Francis was born to a wealthy Italian family in 1181 or 1182. As a young man he renounced his wealth, even stripping off his clothes, and devoted himself to a life of poverty in the service of Christ. He connected with nature, calling all animals “brother” and “sister” and celebrating them in his famous Canticle of the Sun.

He saw the face of Christ in lepers, the most reviled outcasts of his time, and nursed them with compassion. Father William Hart McNichols puts Francis’ ministry into a contemporary context by showing him embracing a gay Jesus with AIDS in “St. Francis ‘Neath the Bitter Tree,” pictured at left. Words on the cross proclaim that Christ is an “AIDS leper” as well as a “drug user” and “homosexual,” outcast groups at high risk for getting AIDS. The two men gaze intently at each other with unspeakable love as Francis hugs the wounded Christ.

McNichols has referred to St. Francis in this icon as the Alter Christus, Latin for the “other Christ.” Thus the icon reveals intimacy between two men, two Christ figures, or between Christ and a Christ-to-be. It was commissioned by a New Jersey doctor who worked with AIDS patients, and appears in the book Art That Dares: Gay Jesus, Woman Christ, and More

A famous peace prayer is attributed to St. Francis. It begins, “God, make me an instrument of your peace.” Late in his life Francis embodied this message through Christian-Muslim dialogue in the Mideast, a region where people are still at war.

In 1219 Francis went to Damietta, Egypt, with the European armies during the Fifth Crusade. He hoped to discuss religion peacefully with the Muslims. He tried to prevent Crusaders from attacking Muslims at the Battle of Damietta, but he failed. Francis was captured and taken to the sultan Malek al-Kamil. At first they tried to convert each other, but each man soon recognized that the other already knew and loved God. They remained together, discussing spirituality, for about three weeks between Sept. 1 and Sept. 26. Brother Robert Lentz celebrates their meeting as a model of interfaith dialogue in the above icon, “St. Francis and the Sultan.”

In 1224, when Francis was in his 40s, he received the stigmata -- marks like the crucifixion wounds of Christ in his hands, feet and side. California artist Kevin Raye Larson emphasizes the sensuality of the ecstatic moment in “St Francis of Assisi Receiving the Stigmata,” pictured above. The painting has appeared on the cover of the spirituality issue of “Frontiers,” the Los Angeles gay lifestyle magazine.

Francis’ special friend in life and ministry was a woman, St. Clare of Assisi. It is often said that they were in love with each other, but redirected their passion toward God. Francis founded the religious order of brothers known as the Franciscans, and Clare founded an order of nuns called the Poor Clares. She is traditionally portrayed as a follower of Francis, but he saw her as an inspiration and a cofounder of his movement. Today she is gaining more recognition as a spiritual leader and guide in her own right. Click here for an icon of Clare with her cat.

Francis died on Oct. 3, 1226. He is the patron saint of animals and the environment, and perhaps the most beloved Catholic saint.
____
This post is part of the GLBT Saints series by Kittredge Cherry at the Jesus in Love Blog. Saints, martyrs, mystics, prophets, witnesses, heroes, holy people, deities and religious figures of special interest to lesbian, gay, bisexual and transgender (LGBT) and queer people and our allies are covered on appropriate dates throughout the year.

Animal blessing events are happening all over the world this month for the Feast of St. Francis, the patron saint of animals. Click here for our animal blessing prayer.

Do you want an artist to draw a portrait of YOUR dog or cat? The Jesus in Love Blog is offering personalized pet portraits this year in honor of St. Francis Day. Click here for details.
___
Image credits:
“St Francis of Assisi Receiving the Stigmata”
by Kevin Raye Larson © 1991
krayel.com

Innovative icons of St. Francis and many others are available on cards, plaques, T-shirts, mugs, candles, mugs, and more at Trinity Stores

Posted by Kittredge Cherry at 10:34 AM

I enjoyed this blog on St. Francis tremendously. Coincidentally, I tune in to the "news magazine" of the Archdiocese of Brooklyn, "Currents", on the NETNY website, because a dear friend of mine anchors the show. They had a lovely spot on St. Francis that also described his encounter with the Sultan.