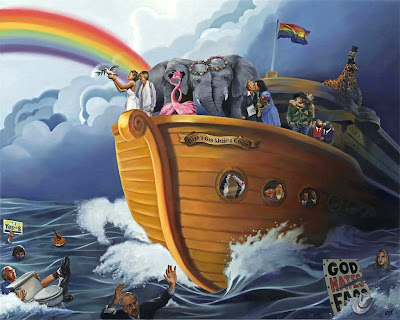 “Noah’s Gay Wedding Cruise” by Paul Richmond
www.paulrichmondstudio.com
Queer visions of Noah’s Ark sail into view today for Shabbat Noach, the day when the story of Noah’s Ark is read in synagogues. This year it falls on Oct. 28-29.

LGBT perspectives on Noah’s journey are offered by Paul Richmond, who painted “Noah’s Gay Wedding Cruise,” and by the Objective Queer Bible Scholar, who wonders: When God told Noah to take “two of every kind” on the ark, did that mean two lesbians, two gay males, two bisexuals, two transsexuals, two heterosexuals, and so on?

Rainbows are a symbol of the LGBT community, and they play a big role at the end of the passage about Noah. God promises that floods will never again destroy all life, and sets a rainbow in the sky as a sign of this covenant.

Elsewhere on Richmond’s queer cruise ship, Sesame Street’s Bert and Ernie come out of the closet to watch from a porthole as a “God hates fags” sign sinks beneath the waves, along with opponents of LGBT rights such as Ann Coulter, Ken Starr, Pat Boone, Fred Phelps, and even Larry Craig with his toilet!

“I chose to symbolize our inevitable victory in the fight for marriage equality by painting my own adaptation of the biblical flood,” Richmond says. For more info and detailed images, see our previous post “Noah’s gay wedding cruise pictured.”

Other queer twists on Noah’s story are offered by the Objective Queer Bible Scholar at the BW16 Blog: “This classic Sunday school tale includes a number of LGBT motifs, my favorite being the command from God to Noah to ‘take two of every kind’ on the ark (6:20), presumably this would include couplings of heterosexuals, homosexuals, bisexuals, and pan-sexuals.” For more of his analysis, see BW16’s post “Two of Every Kind” Intercourse Texture in Noah’s Ark.

Blessing Our Pets: In The Spirit Of St. Francis And Judaism by Jon M. Sweeney (Huffington Post)
Posted by Kittredge Cherry at 10:42 AM

Apropos of the presence (or lack thereof) of gay/lesbian couples on the Ark...The story of Ham (Gen. 9:22 - 25) has definite sexual overtones, although it is not usually cited in the anti-gay harangues. Point is, as we all know, that among the descendants of the survivors of the deluge...well, at least 10%, right?