John of the Cross: Dark Night of a Gay Soul 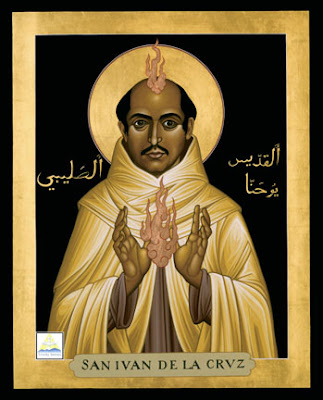 "St. John of the Cross" by Brother Robert Lentz, OFM, trinitystores.com
“The Dark Night of the Soul,” a spiritual classic with homoerotic overtones, was written by 16th-century Spanish mystic Saint John of the Cross, also known as San Juan de la Cruz. His feast day is today (Dec. 14).


For a new version of this article, click this link to Qspirit.net:
John of the Cross: Dark Night of a Gay Soul


And on my flowering breast
Which I had kept for him and him alone
He slept as I caressed
And loved him for my own.

(The whole poem is reprinted in the original Spanish and in English at the end of this post). John, a Carmelite friar who worked with Theresa of Avila, wrote these beautiful verses while imprisoned in a latrine for trying to reform the church.

“The Dark Night of the Soul” is open to various interpretations, but is usually considered to be a metaphor of the soul’s journey to union with God.

John of the Cross also used same-sex imagery to describe divine love in “The Spiritual Canticle.” He wrote, “The love Jonathan bore for David was so intimate that it knitted his soul to David's. If the love of one man for another was that strong, what will be the tie caused through the soul's love for God, the Bridegroom?”


Detail from “Intimacy with Christ 3” by Richard Stott (for full image click here)
Gay writers explore the queer dimensions of the poem at the following links:

Richard Stott, a Methodist minister and art therapist in England, created three large paintings based on “The Dark Night of the Soul.” The triptych is called “Intimacy with Christ.”

Toby Johnson, ex-monk, gay spirituality author and activist, connects the Dark Night of the Soul with gay consciousness at TobyJohnson.com.

Terence Weldon explains why John of the Cross is important for LGBT people of faith at the Queer Spirituality Blog.

In the icon at the top of this post, Brother Robert Lentz shows John with the living flames that he described in this poetry. The inscription by his head puts his name in Arabic to honor the Arabic heritage that John received from his mother. 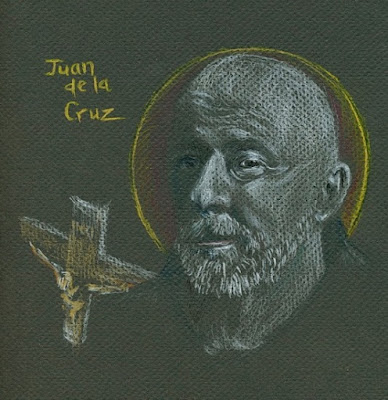 “Juan de la Cruz” by Tobias Haller
“Juan de la Cruz” was sketched with light pastels on dark paper by Tobias Haller, an iconographer, author, composer, and vicar of Saint James Episcopal Church in the Bronx. He is the author of “Reasonable and Holy: Engaging Same-Sexuality.” Haller enjoys expanding the diversity of icons available by creating icons of LGBTQ people and other progressive holy figures as well as traditional saints. He and his spouse were united in a church wedding more than 30 years ago and a civil ceremony after same-sex marriage became legal in New York.

“A typical icon will have a central image of the saint (like this one) and the smaller images framing it will be of events from the saint's life. In this icon however, the framing images are of the Maiden from the Song of Songs and her Beloved! Effectively, the icon communicates to the viewer that John is the Maiden of the Canticle and invites the viewer to join him in this role,” says Kevin Elphick, a Franciscan scholar who studies the ways that saints cross gender boundaries. He photographed the original icon in its church home while retracing the footsteps of John of the Cross on a trip to Spain in 2015.

Individual images of the scenes from Song of Songs can be seen at parroquia-ns-europa.com.


The Dark Night of the Soul
By John of the Cross

1. One dark night,
fired with love's urgent longings
- ah, the sheer grace! -
I went out unseen,
my house being now all stilled.

2. In darkness, and secure,
by the secret ladder, disguised,
- ah, the sheer grace! -
in darkness and concealment,
my house being now all stilled.

3. On that glad night,
in secret, for no one saw me,
nor did I look at anything,
with no other light or guide
than the one that burned in my heart.

4. This guided me
more surely than the light of noon
to where he was awaiting me
- him I knew so well -
there in a place where no one appeared.

5. O guiding night!
O night more lovely than the dawn!
O night that has united
the Lover with his beloved,
transforming the beloved in her Lover.

6. Upon my flowering breast
which I kept wholly for him alone,
there he lay sleeping,
and I caressing him
there in a breeze from the fanning cedars.

7. When the breeze blew from the turret,
as I parted his hair,
it wounded my neck
with its gentle hand,
suspending all my senses.

8. I abandoned and forgot myself,
laying my face on my Beloved;
all things ceased; I went out from myself,
leaving my cares
forgotten among the lilies.

___
Books related to John of the Cross

“Enkindling Love: The Legacy of Teresa of Avila and John of the Cross” by Gillian T. W. Ahlgren (2016)

“The Collected Works of St. John of the Cross,” translated by Kieran Kavanaugh and Otilio Rodriguez

Icons of John of the Cross and many others are available on cards, plaques, T-shirts, mugs, candles, mugs, and more at Trinity Stores

Posted by Kittredge Cherry at 7:51 AM