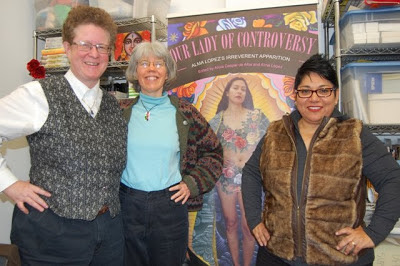 Audrey, Kittredge Cherry and Alma Lopez with her life-sized “Our Lady”
Artist Alma Lopez, who painted the controversial “Our Lady” and other queer saints, opened her studio to guests for one wonderful weekend in November. I visited with my partner Audrey, who wrote the following report on our experience.


A Visit to Alma Lopez’ Studio
By Audrey
After two years of Kitt’s efforts writing about artist Alma Lopez on the Jesus in Love Blog, we decided it was time to take a field trip to meet the artist in person and see her wonderfully wild and colorful paintings of Our Lady, mermaids, Dyke revolutionaries and Aztec-influenced goddesses.

She invited us to visit when she and her spouse Alicia Gaspar de Alba opened their studio to visitors during Inglewood Open Studios in November.

The adventure began as we navigated the usual Los Angeles freeways, dramatically driving past oil derricks pumping away. It was a beautiful post-election Sunday afternoon in November.

I must admit, I had ulterior motives. I’d seen Lopez’ stunning painting “Anima Sola Sirena” online. It shows a mermaid, or in Spanish a sirena—brilliant almost to the point of iridescence. The work was 3 x 4 feet, but even on a small computer screen, it stood out and drew me in. 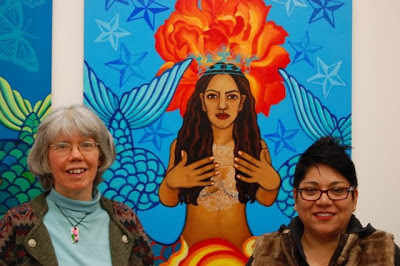 Kittredge Cherry and Alma Lopez with her painting “Anima Sola Sirena”
The subject matter of the all-powerful Siren luring this intrepid lesbian duo, made it doubly worthwhile.

Alma’s studio was in a strip-mall complex with other studios just around the corner from the famous Randy’s Donuts restaurant with the giant donut in front. The Mapquest directions should have said “make a right at the donut,” but obviously the Shell gas station had paid for the ad in Mapquest, so it was right at the Shell station instead. Hey, a seashell is the symbol of the goddess of the sea, and she is cunning in how she communicates with mere mortals.

Helpfully, Mapquest pointed out that if we drove past Isis Street we had gone too far. Clearly lesbian goddess energy had a wild sense of humor in this department.

We felt instantly at home. 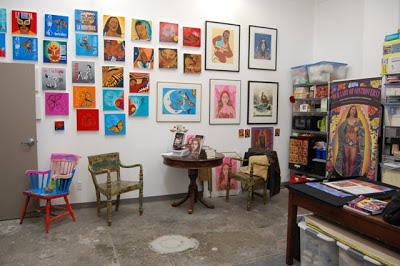 Studio of Alma Lopez and Alicia Gaspar de Alba
Alma explained that an Aztec motif in the cape worn by Our Lady hinted at the matrilineal roots of Guadalupe. A large disk carved with the moon goddess Coyolxauhqui, dismembered, was literally dug up in Mexico City in the 1970s. The woman who made this historic anthropological discovery was a lesbian.

Alma’s eyes flashed in frustration when she told how people protested her vision of Our Lady with her belly and legs exposed, but Jesus is worshiped wearing only a loincloth.

As we conversed about monarch butterflies migrating from Mexico, as we gazed at a butch Siren holding a huge butterfly over her body, the power of women was alive in the form of insects, sea-women and political commentary about the meaning of immigration itself. 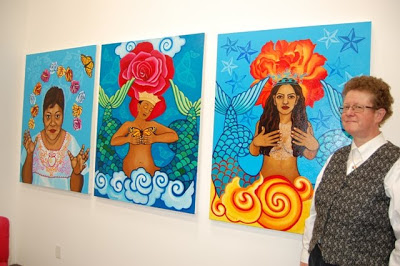 Audrey with big paintings by Alma Lopez, including a butch mermaid in the center.
Alma’s spouse Alicia was away during our visit, but Alma introduced us to her books, including the lesbian historical novel Sor Juana’s Second Dream. Other powerful lesbians drifted or maybe flew into the studio and were drawn into the circle of love. Alma introduced Kitt as the blogger who got people to write letters of support when an Our Lady show in Ireland was attacked by Christian fundamentalists. A film maker had us pose for a photo right in front of the life-sized Our Lady of Controversy. She got all of us to show off our dyke attitude with flair, just as Our Lady did.

To say that I was completely intoxicated with the power and mystery of the fish-women of the sea is an understatement.

Alma’s big banners of “queer saints” hung on one wall. The women in the studio grew quiet as Alma told us their stories, like how Santa Lucia’s eyes were plucked out when she refused to marry. Alma explained that these martyrs protected their virginity to the death not so much out of faith, but because they were lesbians--and that she would do the same if forced to marry a man!

Professor Lopez had triumphed over right-wing attacks on her work, and had stood as firm as the pre-Columbian Goddess herself. In fact, she stood solidly with just as much dyke attitude as Our Lady!

After our time travel to goddess-time, Alma and Kitt exchanged books and autographs companionably. The signed poster of Our Lady will make a welcome addition to our home, but the real question is, “How will we be able to handle all this powerful lesbian energy? And where do we go from here?” 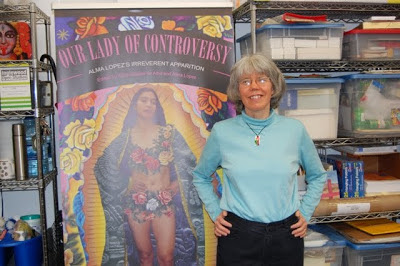 Kitt with Our Lady
___
Related links:

Posted by Kittredge Cherry at 9:03 AM

CJ Barker said...
This comment has been removed by a blog administrator.
9:47 AM