Pope blessing a gay marriage?! See it now in ad for power company 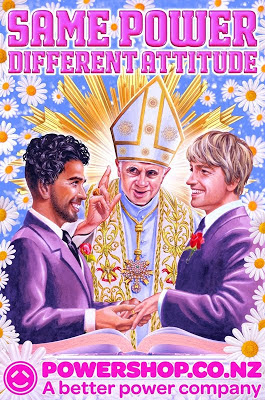 “Same power, different attitude” ad from Powershop
The Pope blessing a gay marriage?! This startling image is the newest ad for a New Zealand power company. It points to a whole different kind of power: the sacred power of love to overcome religious bigotry.

The two happy grooms make a handsome interracial couple as they exchange rings over an open Bible with a Papal blessing. Everyone is smiling and daisies surround them in a joyful burst of flower power.

I celebrate this bold image of the realm of God that is coming into being: A place where love between couples is honored and blessed by church and society, regardless of gender, race or sexual orientation. I believe that same-sex couples already have marriage equality in the eyes of God. This image provides a picture of what it can look like here on earth.

It’s part of Powershop’s ad campaign with the slogan, “Same power, different attitude.” Their main website shows other witty images with a progressive twist, including wartime President Nixon with an afro hairdo wearing a peace sign.

Powershop’s same-sex marriage ad appears on billboards in New Zealand and is being debated now at a micro-site that they set up to receive comments. A company statement there explains that Powershop’s founding principle of individual choice can apply to LGBT weddings as well as to electricity:

“The latest version of Powershop’s long-running campaign is intended to be both thought provoking and satirical. Kiwis have widely debated the issue of marriage equality over the last year, so we’ve used the issue to point out that large institutions can sometimes lose touch with their modern constituents. The power industry is dominated by crusty utilities, many of whom remain resistant to the changes happening in our world.”

Powershop granted me permission to share their ad on the Jesus in Love Blog, but asked me to state that the views I express are my own and not the views of Powershop as an organization. More power to them!

___
Copyright © Kittredge Cherry. All rights reserved.
http://www.jesusinlove.blogspot.com/
Jesus in Love Blog on LGBT spirituality and the arts
Posted by Kittredge Cherry at 10:32 AM

Brilliant post and great sourcing of power! My mother picked this up and posted it on her Facebook account. Your post is particularly relevant here in NZ where we still don't have same sex marriage, and in the States right now with the re-opening of cases in relation to proposition 8 etc. It's also very timely with the legislation UK prime minister Cameron is trying to pass for same sex marriages to be held in religious institutions along with an opt out policy for those religious bodies who aren't there yet with recognising equality in same sex partnerships. So many strong opinions coming from both sides for and against, let's hope they reach a more enlightened outcome than the Church of England did with the recent vote on women bishops! Think of all the tax payer money that will be saved if we don't have to continually come back to the same work of pushing through the obvious :)

The Church of England and Wales made a statement in the UK today that they hadn't been consulted in being barred from performing same sex marriages with the quadruple lock the government announced earlier this week. Interesting times! http://www.guardian.co.uk/society/2012/dec/13/anglican-church-protests-gay-marriage-ban

Same-sex marriage has certainly become a global issue. Thanks, Lala, for the update on what's happening in New Zealand and the UK. I wonder which country will legalize same-sex marriage next?

It's not religous biggotry to live according to Jesus' explaination and definition of marriage found in Matthew 19: to be the relationship between a male and female for the purpose in which His Father created and in addition, in this same chapter, Jesus gives examples that tells everyone that any sexual relationship outside that of a marital relationship of a man and woman is "adultry and fornication" in the eyes of God, but in addition to this Science researchers have scientifically proven that same sex attraction is a biological disorder where "Epi-Markers" that program genes cross and encode genes wrong. In other words, scientist have proven same sex attraction is a birth defect that can be passed down from father to daughter or mother to son and therefore the homosexual lifestyle is a choice enticed by that same sex attraction. Call it religous bias if you want to, but the bottom line is that the homosexual lifestyle can not be justified by religous debate and now it can not be justified scientificly with the argument that it is biologically normal sexual attraction that should be socially accepted through recognition of same sex marriage. Even if this comment isn't approved, at least one person will have gotten the message here.

You'd think he'd be all for it considering he's surrounded by a harem of gay men at the Vatican.

Robert, scripture does not condemn loving, responsible homosexual relationships. There are many resources that fully explain the Bible and homosexuality. Here are a few that I recommend:

Jesus said nothing directly about homosexuality, but he did advocate wildly inclusive love and befriend prostitutes, lepers and other outcasts. He also said, “Do not judge, so that you will not be judged.” (Matthew 7:1)

I am saddened my earlier comments were not added. The billboard was condemned by a large number of gay men and women in Aotearoa New Zealand - and not all of them Christians. It was tacky attention seeking, and nothing less. Praise God the billboards have all be removed.

Brother Graham, I appreciated your Facebook comments about how you were campaigning to have these billboards removed because you found them offensive, tacky and trivializing. However, you only commented about this billboard on Facebook, not here at my blog. I would love to add your FB comments here. I will try to contact you directly about it.

You did comment at this blog about the other recent New Zealand billboard with the queer baby Jesus, and you can see your comments were added to the original article.