Patrons of the AIDS Pandemic by Lewis Williams, SFO
www.trinitystores.com
World AIDS Day on Dec. 1 supports everyone affected by HIV.  The day is dedicated to prevention and treatment, and honors those who died of AIDS -- more than 25 million people worldwide.

For those who want to learn about -- or remember -- what it was like, I recommend the new documentary We Were Here

. With honesty and grace, the film revisits the arrival and impact of AIDS on San Francisco, revisiting the devastation of a gay generation lost to AIDS. For me everyone in the movie looked like someone I knew. ALL the faces were familiar! Watching it is both heartbreaking and inspirational.

The icon “Patrons of the AIDS Pandemic” by Lewis Williams shows two pairs of medieval male saints who faced disease epidemics together with friendship and faith. Their man-to-man bonds speak to the gay community, where AIDS has a disproportionately large impact. The couples stand on each side of a chestnut tree, a symbol of life after death.

Let us join in the following AIDS prayer by Diann L. Neu, Diann, cofounder and codirector of the Women’s Alliance for Theology, Ethics and Ritual (WATER). It was published in Equal Rites: Lesbian and Gay Worship, Ceremonies, and Celebrations 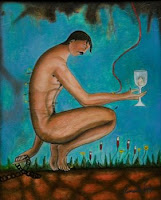 Posted by Kittredge Cherry at 8:25 AM