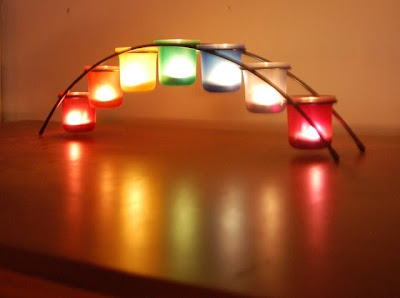 People celebrate Bridge of Light by lighting six candles, one for each color of the rainbow flag, on New Year’s Eve -- or from Dec. 26 to Jan. 1, one candle per day.

Each candle stands for a spiritual principle and its expression in the lives and history of LGBT and queer people. Feel free to improvise other methods, such as using colored paper to fold origami cranes.


For a new version of this article, click this link to Qspirit.net:
Welcome the New Year with rainbow candles! Bridge of Light honors LGBTQ culture

The candles are intended to provide a starting point for individual and group meditations on these principles:

1. Red - The Root of Spirit (Community)
2. Orange - The Fire of Spirit (Eros, sexuality, passion)
3. Yellow - The Core of Spirit (Self-esteem, courage)
4. Green - The Heart of Spirit (Love)
5. Blue - The Voice of Spirit (Justice, self-expression)
6. Purple - The Eye of Spirit (Wisdom)
7. All Candles - The Crown of Spirit (Spirituality)

Together these colors form a rainbow, a time-honored symbol of a bridge between two worlds: heaven and earth, East and West, male and female, queer and non-queer.

The principles are beautifully expressed in a new benediction prayer written for Bridge of Light by Yewtree (Yvonne Aburrow) of the Dance of the Elements Blog:

,” founded Bridge of Light in 2004. It has obvious parallels to Kwanzaa, the African-American cultural holiday started by Ron Karenga in 1966.

“Bridge of Light is an interfaith and omni-denominational cultural and spiritual tradition,” Perez says. “The annual winter ritual...has helped to draw attention to the positive contributions made by members of the LGBT community in the areas of spiritual growth, inner transformation, and religious leadership.” One of his articles on the subject is The Seven (Revised) Principles of Bridge of Light. (GaySpirituality.com)

The following summary of the seven principles of Bridge of Light includes historical time periods, foods and more about the chakras, the energy centers of the human body. I synthesized and developed this info based on the resource links at the end of this post. For Jesus in Love readers I highlighted Christian history with links to LGBT Saints. The seven principles are also matched with the seven models of the queer Christ from gay theologian Patrick S. Cheng’s new book “From Sin to Amazing Grace: Discovering the Queer Christ.

. A variety of systems have developed to associate each chakra with a power animal. A few are suggested here, but feel free to follow your intuition.

Time period: Before Christ / Before the Common Era
Celebrate same-sex love in goddess worship, paganism and other pre-patriarchal spiritualities, in ancient myths and cultures, and in the Hebrew Scriptures/Old Testament.

Living and Self-Loving Christ (sin as shame, grace as pride)

Time period: 1st - 4th centuries
Celebrate same-sex love in the life of Christ, among early Christians, in the late Roman Empire and other cultures.

Historical Jesus and the Beloved Disciple

3. Yellow - The Core of Spirit (Self-Esteem)

Out Christ (sin as the closet; grace as coming out)

Time period: Renaissance, 15th-17th centuries (c. 1400-1699)
Celebrate same-sex love in the era that included the Age of Discovery, the Protestant Reformation and the invention of the printing press.

5. Blue - The Voice of Spirit (Justice and Self-Expression)

Time period: 1950 to present
Celebrate same-sex love and gender role defiance in recent LGBT, queer, feminist and black liberation movements, including the struggle for LGBT religious rights. LGBT-affirming churches and religious institutions are founded. Pluralistic expressions of sexuality and gender multiply, but some are martyred in anti-gay hate crimes.

Animal: None. Ancestors and spirit guides.

7. All Colors / White - The Crown of Spirit (Spirituality)

When all the colors of the rainbow mix, they create white light, evoking universal consciousness.

Time period: Now and the future
Celebrate same-sex love now and in the future! Be a witness of love in all its expressions. Sainthood is a state to which all are called.

Hybrid and All-Encompassing Christ (sin as singularity; grace as hybridity)

Foods: Fasting. Instead of eating, inhale incense and smudging herbs such as sage. Or… Celebrate with a slice of rainbow cake! 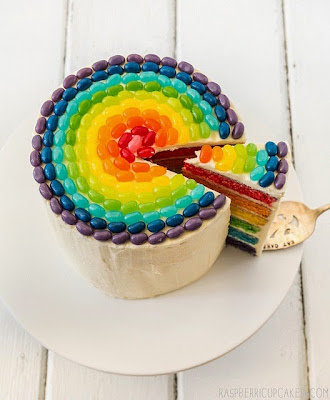 “Rainbow Cake with Jelly Beans” (Flickr.com)
Bridge of Light continues to evolve. Aburrow suggested adding sacred foods, such as “rainbow-tinted marble cake maybe, or one food of each colour?”

I like the idea of doing a daily candle for each color, but every year Dec. 26-31 is such a busy week for me! I wonder if Bridge of Light could also be celebrated at the summer solstice in connection with LGBTQ Pride?

___
Links to other resources for Bridge of Light:

"Seven Shrines of the Body" by artist Richard Stott

The Story of the "Queer Saints and Martyrs" by Terence Weldon

Author Carolyn Myss connects the seven chakras with the seven sacraments of the church in her book “Anatomy of the Spirit: The Seven Stages of Power and Healing

CD set of meditations based on the chakras, “Activating Your Chakras Through the Light Rays

S(t)even Years: A 7-year art project based on the chakras by Steven Reigns

“The Myth, Magic, and Science of the Rainbow” by by Cedar Stevens
http://naturalmagickshop.com/articles/The-Myth-Magic-and-Science-of-the-Rainbow.html

Happy Bridge of Light, everybody!  Like the rainbow, may we embody all the colors of the world! Be renewed and refreshed as the New Year begins! May 2014 bring everyone peace, health and prosperity!

____
This post is part of the LGBT Calendar series by Kittredge Cherry at the Jesus in Love Blog. The series celebrates religious and spiritual holidays, holy days, feast days, festivals, anniversaries, liturgical seasons and other occasions of special interest to LGBT and queer people of faith and our allies.

Posted by Kittredge Cherry at 8:55 AM