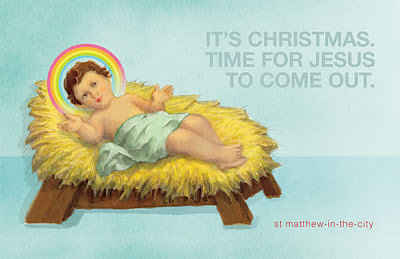 “Time for Jesus to come out” billboard from St. Matthew-in-the-City

A gay baby Jesus with a rainbow halo lights up a new billboard for a church in New Zealand.

“It’s Christmas. Time for Jesus to come out,” says the billboard installed this week by St. Matthew-in-the-City, a progressive Anglican church in Auckland.

I experienced joyous revelation when I first saw baby Jesus smiling at me with a rainbow glow from his manger. I have created and written about queer Nativity scenes since 2009, but showing the infant Christ as gay never even crossed my mind. The baby Jesus has been displayed with two mommies, two daddies, queer Magi and gay shepherds -- but this is the first time that I’ve seen the Christ child himself presented as queer.

And yet a queer baby Jesus actually makes more sense historically than some of the other queer Nativities, because some Bible scholars do believe that Jesus experienced same-sex attractions and perhaps even a male lover. And if Jesus was gay, he must have been born that way.

“This year we invited discussion and debate on the sexual orientation of Jesus,” said St. Matthew’s clergy Rev. Glynn Cardy and Rev. Clay Nelson in a statement about the billboard on the church’s website.

They got their wish as international controversy erupted over the billboard on the Internet and in news reports. The gay baby Jesus billboard appears at a time when legislation to allow same-sex marriage is being considered by the New Zealand parliament. Another new billboard on the subject shows the Pope blessing a gay marriage.

I contacted Nelson about the billboard and he gave permission to share it on the Jesus in Love Blog “with our blessing.”

His official statement on the church website raises a provocative question. “Some scholars have tried to make the case that he might have been gay” says Nelson. “But it is all conjecture. Maybe gay, maybe not. Does it matter?”

It does to me. Every community presents Jesus in their own way. There’s black Jesus, Asian Jesus -- and now queer Jesus to heal the damage being done by homophobes in Christ’s name. It makes my Christmas much merrier.

___
Special thanks to Andrew Craig Williams for the news tip.

____
This post is part of the Queer Christ series series by Kittredge Cherry at the Jesus in Love Blog. The series gathers together visions of the queer Christ as presented by artists, writers, theologians and others. More queer Christ images are compiled in my book Art That Dares: Gay Jesus, Woman Christ, and More

Posted by Kittredge Cherry at 2:57 PM

The point is so beautifully covered in you novels, Kitt. If Jesus is to truly be understood as "God with us" and the perfect manifestation of the Divine in the Human, being omni-gendered and pan-erotic is absolutely essential.

Yesterday evening I presented "Our Lady of Travels" to a few participants in our Wednesday evening scripture study, and we did discuss Jesus' statement that there would be "no marrying or giving in marriage" in heaven. We agreed that this did not necessarily mean there would be no gender nor eroticism in heaven, but it DOES imply that marriage in the traditional mode of a man "owning" a woman and having property rights over her is not part of God's ideal for relationship.

I don't want to be a "broken record" (to use a term that is now obsolete in our digital age), but you said it so well in your novel that I think it needs continuous repetition.

Yes, I DID say Jesus was omni-gendered and pan-erotic in my “Jesus in Love” novels, so it’s all the more surprising to me that I never thought of showing the baby Jesus with a rainbow halo or some other rainbow symbol. And I have been in dialogue this fall with an artist about queer Christmas images. (You’ll see the result here on Dec. 24.) For me this has affirmed the ongoing need to look at and reflect on the nature of God, Christ and LGBT people… to heal the homophobia and the blindness it causes. As you say, repetition is valuable.

I like you interpretation of marriage in the afterlife.

Another tacky promo by a church that likes to highlight itself rather than God or Christianity. It's a great shame people across the world know nothing of the truth behing this kind of exhibitionism.
Once again, a white European baby, with cherry lips. I guess it's a little better than usual as he isn't blond.
As for the message - Christ has always 'been out' from before time - He was never in.
When are we going to move on form this kind of stuff?

For me, the message “It’s Christmas. Time for Jesus to come out” is a reference to him “coming out” of the womb on the day he was born…. Linking Christ’s birth with the sense of rebirth that many LGBT people feel when we come out of the closet. Coming from an American context, I find it liberating to see the baby Jesus with a rainbow halo. Brother G-M, I know that you live in New Zealand where this billboard is displayed, so you are more aware of the context there. You’re right that the Christ child looks like a white European. I suppose the church is trying to tackle one issue at a time here, but I would love to see a dark-skinned baby Jesus with a rainbow halo too.

I don’t think we will "move on from this kind of stuff" until all churches stop bigotry against queer people. May that day come soon!