Welcome Advent with a queer look at the virgin birth 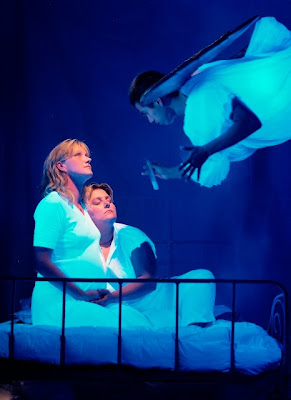 Welcome Advent the queer way by considering the virgin birth with fresh eyes and ears.

Williams' calendar features a new song every day from now through Christmas as a fundraiser for Shelter Cymru, a charity for the homeless in Wales. It starts today with the medieval song “Videte Miraculum” (“See the Miracle”) by Thomas Tallis. Williams adds a subtle contemporary queer flavor by having a lesbian do the Latin vocals, which translate into lines like, “A virgin has conceived though she knows not a man.”

Another “queered-up track” will be a “rainbow version” of “Some Children See Him” with new queer/straight lyrics by lesbian author Kittredge Cherry. (Yes, I myself wrote a new verse for the song and even sing on this recording!) More details will be posted here when it is officially released on Dec. 23.

Even mainstream performances of “Videte Miraculum” feature Latin lyrics that seem to invite a lesbian interpretation. Consider the lesbian implications of this English translation:

Behold the miracle of the mother of God:
a virgin has conceived though she knows not a man,
Mary, who stands laden with her noble burden;
knowing not that she is a wife,
she rejoices to be a mother.
She has conceived in her chaste womb
one who is beautiful beyond the sons of men,
and blessed for ever,
she has brought forth God and man for us.
(translation by Mick Swithinbank)


This version by the British choral group Stile Antico is available on video and on their album “Puer Natus Est: Tudor Music for Advent and Christmas.”

“The original is somehow sad. My version is celebratory!” Williams said. “My best friend Tamsin, a lesbian, is providing some vocals for me -- so it changes the story of the Immaculate Conception, or rather broadens it, to include lesbian procreation too. We see virgin births all the time these days -- children are born every day to parents who needed a little help to conceive, and many of those are lesbian parents.”

Tamsin does not sing on his version the track, but instead Williams asked her to vocalize what Mary felt. He sampled Tamsin's voice and digitally converted it into the main instrument of the piece, like an angelic, but wistful woodwind instrument. “I’ve also modernised the music, and added some glitchy beats,” he said. “It’s now very 21st Century!”

Williams is not only a music maker, but also a writer and artist. Jesus in Love has often featured his images, including his “Queer Resurrection” and “Jesus has Two Daddies.” He uses the pseudonym Fflwcs, which is Welsh slang for “rubbishy sweets that are bad for you.”

The Madonna and her female lover are portrayed by a real lesbian couple, seven months’ pregnant through artificial insemination in “Annunciation” (pictured above) from the “Ecce Homo” series by Swedish photographer Elisabeth Ohlson Wallin and Becki Jayne Harrelson. The angel Gabriel comes in the form of their gay male friend, who floats in with a message from God—and a test tube for insemination.

Two lesbian mothers cuddle the Christ child in “Madonna, Lover and Son” (pictured below) by Atlanta painter Becki Jayne Harrelson. She puts her queer Holy Family into the same landscape as Da Vinci’s “Madonna of the Rocks.” 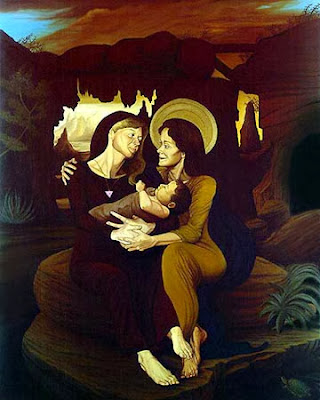 Williams has a tradition of creating Christmas music for his friends and family every year, but this year he wanted to do more and help others by doing an entire Musical Advent Calendar as a fundraiser for Shelter Cymru, one of his favorite charities. He explains the project in his own words:

“Christmas means so many things to so many people, and though I'm not a believer, I love the story of the nativity (Kitt inspired me to find my own queer nativity). I love helping my queer brothers and sisters to see themselves reflected in the stories they love - everything from the Bible, to The Mabinogion (a collection of ancient Welsh folk tales),” he said.

Visit Williams’ Musical Advent Calendar page for a full schedule of his holiday music. New songs will be posted daily on his blog and Soundcloud page. Coming tomorrow: an instrumental called “We Three Queens.” Williams adds, “Just a silly title! But I wanted to make it ambiguous -- drag queens, wise women, witches - could have been anyone!”
___
Related links:

Lesbian Madonna, lover and son affirm Christmas (Becki Jayne Harrelson)
____
This post is part of the LGBT Holidays series by Kittredge Cherry at the Jesus in Love Blog. The series celebrates religious and spiritual holidays, holy days, feast days, festivals, anniversaries, liturgical seasons and other occasions of special interest to lesbian, gay, bisexual, transgender and queer people of faith and our allies.

Posted by Kittredge Cherry at 6:27 PM

Hi Kitt, thank you so much for blogging about my Videte Miraculum! I'm happy that it helped you celebrate Advent.

Hello in warm greeting with blessing for that advents time in to joy and be thankful for Christ and see today that he is coming with the power ,thanks and bless,keijo sweden

My Advent article sparked debate about the definition of virginity on my Facebook page. The traditional idea is it means that a woman has not had intercourse with a man. But does this definition invalidate lesbian sexual activity? Some lesbians identify with the power of "virgin martyrs" who refused to marry or have sex with men. The whole concept of what Trudie calls “hymen worship” has been used to oppress women.

Thanks for the warm Advent greetings, Andy and Keijo! May God bless you during this Advent season of expectation and joy!