Patron saints for straight allies: Adele Starr of PFLAG and others


For a new version of this article, click this link to Qspirit.net:
Adele Starr and others: Patron saints for straight allies of LGBTQ people 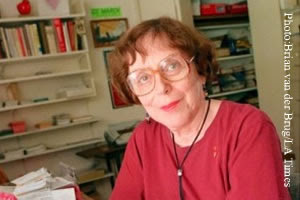 Adele Starr (photo by Brian van der Brug, Los Angeles Times)
After her son came out in 1974, Adele Starr helped launch the group that became Parents, Families, and Friends of Lesbians and Gays. She overcame her negative perceptions about homosexuality to become an unflagging champion for LGBT rights and PFLAG’s first national president. Starr died on this date (Dec. 10) in 2010 at age 90.

She is included in the LGBTQ Saints series at the Jesus in Love Blog for her courage and dedication in speaking up for her gay son and for all LGBT people.

Starr was a mother of five living in Los Angeles, California, when her son Philip Starr came out to his parents in 1974. At that time many people still considered homosexuality to be a mental illness, and parents were often blamed for causing it. She was upset, so her son urged her to attend a support group that later evolved into PFLAG.

Two years later she started the Los Angeles chapter of PFLAG, loosely based on a group in New York. She hosted the first meeting in her home with 35 parents. The group grew quickly and soon moved to the Methodist church in Westwood where it still meets almost 40 years later.

Starr spoke at the 1979 March on Washington for Lesbian and Gay Rights. Two years later she was elected as the first national PFLAG president, serving in the early years of the AIDS crisis until 1986.

Starr explained her motivations with powerful eloquence at PFLAG’s 10th anniversary conference: “We did it out of love and anger and a sense of injustice, and because we had to tell the world the truth about our children.”

PFLAG is now a Washington-based national non-profit organization with 200,000 members and supporters and more than 350 affiliates in the United States and abroad. It provides support, education and advocacy for LGBT people, their families, friends and allies.

Among the traditional saints, Saint Monica is a possibile role model for “patron saints of straight allies” because her son, Saint Augustine of Hippo, was in love with another man. But she was not exactly an ally for queer rights. Monica encouraged her son’s conversion to Christianity, which led him to condemn homosexuality in writings that are still influential today. Some Catholic websites even list Monica as the “patron saint of disappointing children.”

In memory of PFLAG founder Jeanne Manford (Jesus in Love)

___
Books related to allies, spouses and parents of LGBTQ people

by Robert A. Bernstein

“Always My Child: A Parent's Guide to Understanding Your Gay, Lesbian, Bisexual, Transgendered, or Questioning Son or Daughter” by Kevin Jennings with Pat Shapiro

“Beyond Acceptance: Parents of Lesbians and Gays Talk About Their Experiences” by Carolyn W. Griffin

The Other Side of the Closet: The Coming-Out Crisis for Straight Spouses and Families, Revised and Expanded Edition

Posted by Kittredge Cherry at 8:52 AM