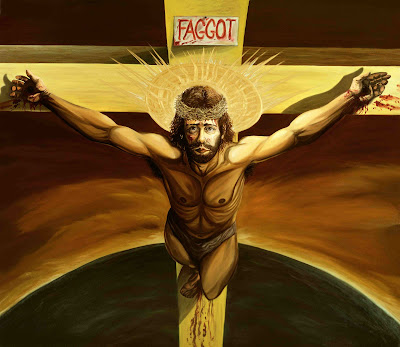 The Crucifixion of Christ by Becki Jayne Harrelson
“Rethinking Sin and Grace for LGBT People Today,” a liberating five-week series by Rev. Dr. Patrick S. Cheng, continues today with “the Transgressive Christ.”
[Update: A new book based on this series, “From Sin to Amazing Grace: Discovering the Queer Christ


The fourth christological model of sin and grace for LGBT people is the Transgressive Christ.  The Transgressive Christ arises out of the reality that Jesus Christ was crucified by the religious and political authorities of his day for refusing to conform to their standards of behavior.  Indeed, Jesus is constantly seen in the gospels as transgressing the commonly-accepted religious and legal boundaries of his day.  In a world obsessed by purity codes, he touches those who are unclean, including lepers, bleeding women, and the differently abled.  He eats and drinks with outcasts such as tax collectors and sinners.
Jesus also challenges the religious authorities with respect to their teachings (such as healing on the Sabbath, and the grounds for divorce).  He rejects his biological family, and he is rejected by his hometown.  Many of his parables are about those who are on the margins of society, such as Samaritans.  As such, the Transgressive Christ can be understood as God’s solidarity with the suffering of LGBT people and others who refuse to conform to the rules of the principalities and powers of this world.
Robert Shore-Goss, the gay theologian and Metropolitan Community Church minister, has written about the Transgressive Christ in his groundbreaking books on LGBT christology, Jesus Acted Up

and Queering Christ: Beyond Jesus Acted Up

[2]  In Jesus Acted Up, which was an angry theological response to the silence and inaction of both civil society and the Church with respect to the HIV/AIDS crisis, Shore-Goss argued that Jesus Christ is a model for “transgressive practice” with respect to advocating for sexual justice.
Specifically, Shore-Goss compared Jesus’ actions in driving out the animal merchants and overturning the tables of the money changers in the Temple to the ACT UP/New York protest in St. Patrick’s Cathedral during the height of the HIV/AIDS crisis in which a protester crumbled up a consecrated host instead of eating it.  For Shore-Goss, both actions “violated sacred space, transgressed sacred ritual, and offended sensibilities.”  Yet, according to Shore-Goss, both acts exhibited a “profound reverence for the sacred based on God’s justice-doing.”[3]  Indeed, in Queering Christ, Shore-Goss argues that the idea of transgression can be seen as a metaphor – if not the metaphor – for  queer theologies today.[4]
Sin as Conformity
If the Transgressive Christ is understood as the One who is tortured and executed for daring to break society’s rules, then sin – as that which opposes the Transgressive Christ – can be understood as mindless or blind conformity with the rules of the ruling majority.  The sin of conformity is something that occurs within all groups, including the LGBT community.  For example, it is easy for gay men to get caught up in the white, middle-class gay male “scene” in which superficial standards of beauty, body types, and material possessions are the only measure of a person’s worth.
There is also the destructive behavior of “mainstream” lesbians and gay men who look the other way – or fail to speak up – with respect to the sufferings of other people on the margins (LGBT or otherwise), whether it be issues of racism, social and economic injustice, or hostility towards marginalized elements (such as transgender and bisexual people) within the LGBT community itself.  In fact, the sin of conformity can easily lead to mob violence against an innocent scapegoat or even the genocide of entire groups.  Sadly, just because a group has suffered from discrimination in the past does not mean that it is immune from the sin of conformity, particularly when it tries to distance itself from those who are deemed to be too different, just to “fit in.”
Grace as Deviance
By contrast, grace in the context of the Transgressive Christ can be understood as deviance, or the willingness to transgress social, legal, and religious boundaries and norms. As in the case of coming out, one’s ability to challenge such boundaries and norms is not something that can be “willed” or “earned,” but is rather a gift of grace from God.  Although there is always the very real risk of crucifixion for challenging societal norms, there is also the promise of resurrection on the other side in terms of being true to one’s own God-given sexual orientation and gender identity.
The grace of deviance can be seen in various sub-communities within the LGBT community that normally are marginalized, such as the transgender community, the bisexual community, and the leather, fetish, and BDSM community.  These communities are gifts to the wider LGBT community.  For example, Kaui, a transgender woman of Hawaiian, Chinese, Filipino, and Samoan descent, has described the Mahu (that is, trans people in Hawai’i) as a gift of grace to the world: “We’re actually angels.  We were sent down to earth to soak up all of man’s sins.  I was set up to earth to make people laugh and happy, to give them counseling that they need.”[5]
[1] Copyright © 2010 by Patrick S. Cheng.  All rights reserved.  The Rev. Dr. Patrick S. Cheng is the Assistant Professor of Historical and Systematic Theology at the Episcopal Divinity School in Cambridge, Massachusetts.  This essay is adapted from his article, “Rethinking Sin and Grace for LGBT People Today,” in the second edition of Sexuality and the Sacred: Sources for Theological Reflection

(Bloomington, IN: Xlibris Corporation, 2001), 112-13.
Come back next week for Part 5: the Hybrid Christ by Patrick S. Cheng.
Click here to see the whole series so far.
Editor’s note from Kittredge Cherry: The image for this post, “The Crucifixion of Christ” by Becki Jayne Harrelson, shows Jesus labeled a “faggot” and executed for daring to break society’s rules. “Look at the word ‘faggot’ on the cross. You could substitute the word ‘nigger,’ ‘Jew boy,’ ‘honkie,’ ‘redneck’ or ‘bitch’—it all means the same. Anytime anyone rises up in condemnation, hatred, or violence against another, Christ is crucified,” Harrelson explains in my book “Art That Dares

Posted by Kittredge Cherry at 10:37 AM

To me, this is the most meaningful essay in the series so far. It is so easy to get caught up in what is "current" in cultural terms! I've just been re-reading, for about the sixth time, Patricia Nell Warren's "Front Runner". Now, thirty-plus years beyond the original publication of that magnificent novel, I find myself being jolted yet again back into awareness both of how far we've come, and how far we have yet to go. And, of course, how often we fall back into the same traps. Cheng focuses the whole reality of Jesus ever more vividly!

I find that each of the models is amazing in its own way. I love how the Transgressive Christ reverses the meaning of sin from the standard definition of "breaking rules" into the liberating definition of "blindly following rules." Thanks, Trudie, for the connection to “Front Runner.”

Violence combined with sex is not liberation, it is what male supremacy is built on.

Culture and religion have always clashed as long as anyone can remember. Nothing will change until people do.