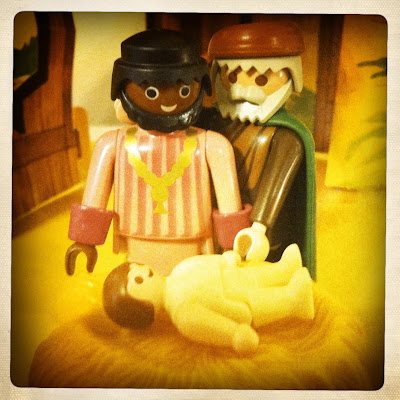 Photos by Baub Alred launch the LGBT Nativity series at the Jesus in Love Blog. A variety of fun and beautiful photos of queer manger scenes will be posted here between now and Christmas.

Five people submitted images for our LGBT Nativity contest, and more are expected soon. They reimagine the Holy Family in liberating new ways because, after all, love makes a family. Their creations can free viewers to experience the divine in new ways and empower those who have been excluded by church tradition.

“Blaine and Patrick’s Adoption Party” is a three-part series by Baub Alred, a digital artist living and working in Champaign, IL. His images highlight the radical nature of Christ’s birth in two ways -- by presenting his parents as an inter-racial couple as well as a same-sex couple. The figures obviously come from a traditional Nativity set, but Alred expands their meaning beyond Bethlehem with a witty title suggesting that this could be a contemporary gay adoption.

Mixing and matching Nativity sets to create queer scenes can encourage LGBT people to approach Christmas with a childlike spirit again. Alred brings back the fun of the Christmas, which can be a lonely time for LGBT folk who may be estranged from family and the hyper-hetero imagery of the typical manger scenes.

Surely the love between parents and child is sacred now as it was 2,000 years ago, even if the parents are queer. Alred succeeds in expressing their love by placing the two fathers close together in a realistic pose that brings the toy figures to life.  The photos are tinted yellow with darkened edges, evoking the antique feeling of old-fashioned Daguerreotype photography. One image focuses tightly on the Holy Family, while the rest of the series presents a larger view, either with animals or with human visitors. 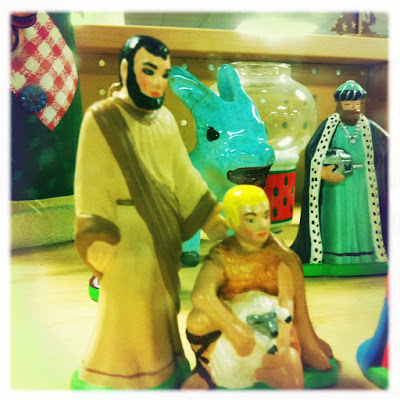 “Tim and Jon with their lamb Carl” by Baub Alred

Alred’s playful photo of gay shepherds (above) is a reminder that surely there were a few shepherds who felt same-sex attractions while keeping watch over their flocks by night in the field around Bethlehem when Jesus was born. The modern names suggest that the story is as relevant today as it was 2,000 years ago.

His inter-racial manger scene (below) shows Jesus with two fathers. A price tag is visible, perhaps hinting at the price that Jesus will pay at the cross. Traditionally this somber reminder is provided by a Magi who brings the baby a gift of myrrh, a spice used for embalming. 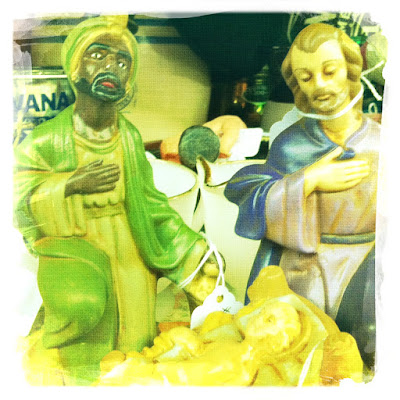 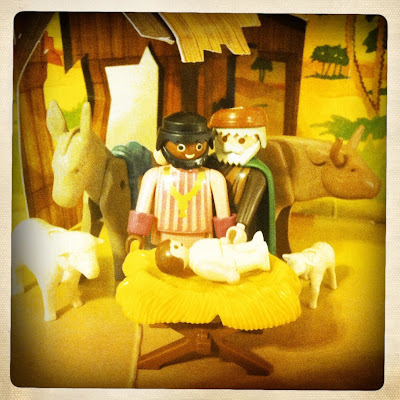 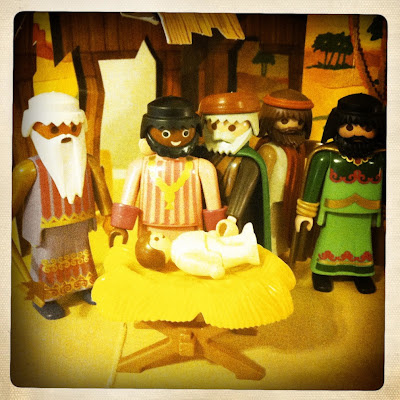 
For more about the lesbian and gay Nativity scenes, see our previous posts:

Keep coming back for more queer Nativity scenes now through Christmas at the Jesus in Love Blog !
Posted by Kittredge Cherry at 9:59 AM