Christ the Bridegroom, Br. Robert Lentz, OFM, © 1985.
www.trinitystores.com
Many believe that John the Evangelist was Jesus’ “beloved disciple” -- and possibly his lover. His feast day is today (Dec. 27).


For a new version of this article, click this link to Qspirit.net:
John the Evangelist: Beloved Disciple of Jesus

John was an apostle of Jesus and is the presumed author of the Gospel of John, Book of Revelation and Epistles of John. The Bible describes their warm relationship in depth. Jesus called John “son of thunder.” John participated in many of the main events in Christ’s ministry, and was the only male disciple present at the crucifixion. From the cross, Jesus entrusted John with the care of his mother. Many believe that John was the “beloved disciple” who sat next to Jesus at the Last Supper and rested his head on Jesus’ chest. There is even a medieval European tradition that John and Jesus were the bridal couple at the Cana wedding feast.

Reputable Bible scholars have explored the controversial idea that Jesus and John were lovers. An excellent analysis is included in “The Man Jesus Loved: Homoerotic Narratives from the New Testament

” by Theodore Jennings, Biblical theology professor at Chicago Theological Seminary. He finds the evidence “inconclusive” as to whether the beloved disciple was John, but it leaves no doubt that Jesus had a male lover.

“A close reading of the texts in which the beloved disciple appears supports the hypothesis that the relationship between him and Jesus may be understood as that of lovers. As it happens, both Jesus and the beloved are male, meaning that their relationship may be said to be, in modern terms, a ‘homosexual’ relationship,” Jennings writes (p. 34).

After Jesus left the earth, John went on to build a close, loving relationship with his disciple and scribe, Prochorus, bishop of Nicomedia. For more info, go to “St John the Evangelist and Prochorus” at the Queer Saints and Martyrs (and Others) Blog.

The love between John and Jesus is illustrated in the icon above, “Christ the Bridegroom,” by Robert Lentz, a Franciscan friar known for his innovative icons. Author-priest Henri Nouwen

, famous but struggling with a secret gay identity, commissioned it in 1983. He asked for an icon that symbolized the act of offering his own sexuality and affection to Christ. Research and reflection led Lentz to paint Christ being embraced by his beloved disciple John, based on an icon from medieval Crete.

“Henri used it to come to grips with his own homosexuality,” Lentz said in an interview for my book “Art That Dares

,” which includes this icon and the story behind it. “I was told he carried it with him everywhere and it was one of the most precious things in his life.” Nouwen’s goal was celibacy and he did not come out publicly as gay before his death in 1996. The icon takes the Biblical theme of Christ as bridegroom and joins it to the medieval motif of Christ with John. The resulting image expresses their intimate friendship with exquisite subtlety.

Becki Jayne Harrelson painted an especially realistic and loving version of Jesus and the Beloved at the center of her “Last Supper” (beloa). She is a lesbian artist who uses LGBT people as models in her religious art. Raised in a fundamentalist Christian family, she uses art to express her passion for justice.


Detail from Study for The Last Supper
by Becki Jayne Harrelson

Another intimate icon of Jesus and the beloved disciple was painted by Jim Ru (below). It was displayed in his show “Transcendent Faith: Gay, Lesbian and Transgendered Saints” in Bisbee Arizona in the 1990s. 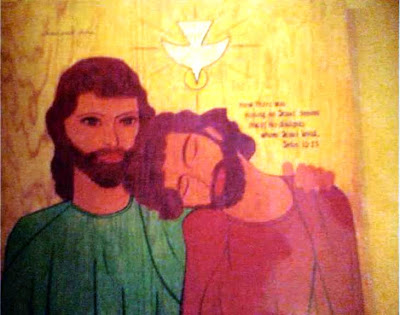 “Jesus and the Beloved Disciple” by Jim Ru
I also wrote about John as the beloved disciple in my novels “Jesus in Love” and “At the Cross.”  In honor of John’s feast day, I post this scene from “Jesus in Love: A Novel

.” Jesus, the narrator, remembers the day he met John:

I became distracted by the not unwelcome presence of somebody standing close behind me, closer than necessary in the loosely packed crowd. I sensed that it was John, and spun around to see him planted there like a tall cedar tree. He leaned against me, eyes flashing. “I can’t wait for the Messiah to come. I’ve seen him in visions.”

“Really? Tell me what you remember.” It was exciting to find someone who was aware of God’s efforts to communicate.

“The Messiah is like a gentle lamb who sits on a throne with a rainbow around it. And yet his eyes flame with fire, and a sharp sword comes out of his mouth to strike down evildoers.”

“Are you saying my vision isn’t true?” he challenged.

“No, I’m not saying that. I expect that you will see more.”

When John smiled, his faced crinkled into a fascinating landscape of wrinkles. His eyes felt black and mysterious like the midnight sky as they roamed over me. “Do you want a prayer partner tonight?” he asked.

If anyone else had asked, I would have said no, but I looked again at John’s handsome, bejeweled soul and his long, sinewy body.

“Sure,” I agreed impulsively.

Only then did I notice that the Baptist had finished preaching. John steered me toward the caves where the Baptist and his inner circle of disciples lived. Lower-ranking disciples were ready with water vessels and towels to assist everyone with ritual purification before we ate a spartan meal of locusts and wild honey. One of them approached me.

“Wash up, and we’ll get together after supper,” John said as we parted.

_________
This post is part of the GLBT Saints series at the Jesus in Love Blog. Saints and holy people of special interest to gay, lesbian, bisexual and transgender (GLBT) people and our allies are covered on appropriate dates throughout the year.
_________

Icons of Christ the Bridegroom, John the Evangelist and many others are available on cards, plaques, T-shirts, mugs, candles, mugs, and more at Trinity Stores

Below is another contemporary image of John the Evangelist available from TrinityStores.com. 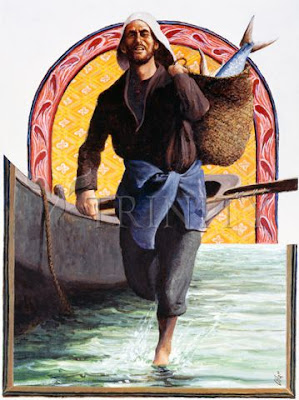 Posted by Kittredge Cherry at 10:46 AM