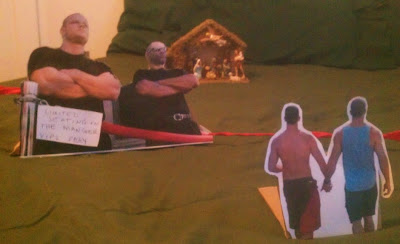 A variety of queer manger scenes are being posted here before Christmas to reimagine the Holy Family in liberating, loving new ways.

Jon Trouten writes Jon’s Blog (www.jontrouten.blogspot.com) and lives in Iowa with his husband and their two sons. His image shows a gay contemporary couple holding hands as they walk toward a typical manger scene far in the distance. But their path is blocked by two “Nativity bouncers” -- tough guys with their arms crossed. Their sign warns, “Limited seating in the manger. VIPs only.”

Trouten dares to use the symbolism of the manger scene for social commentary, pointing out the hypocrisy of conservative Christians who stop LGBT people from full participation in the church. There was no room at the inn for Mary and Joseph 2,000 years ago, so Jesus was born in a lowly stable. Likewise there is no room in many churches today for LGBT people who want to get closer to Jesus. “Nativity Bouncer” is a metaphor of the ongoing struggles for same-sex marriage, ordination of LGBT clergy and full religious rights for queer people. The image suggests that the journey is far from over. The gay couple is moving forward, surrounded by a halo of white light. It looks like they have a good chance of breaking through the red-rope barrier to reach the manger, Jesus, and love incarnate.

Trouten assembled his queer manger scene in his own bedroom using cut-out photos and a classic Nativity set. Then he took a photo of his creation to share with the world through the LGBT Nativity project at the Jesus in Love Blog. 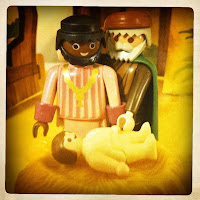 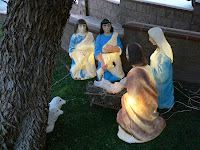 Keep coming back for more queer Nativity scenes now through Christmas at the Jesus in Love Blog !
Posted by Kittredge Cherry at 10:20 AM