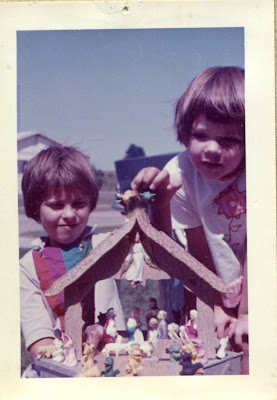 I dug out an old photo of me as a child playing around with a Nativity scene for the LGBT Nativity project at the Jesus in Love Blog.

A series of queer manger scenes are being posted here before Christmas to reimagine the Holy Family in liberating, loving new ways.

We girls look like little cherubs as we add elephants and other animals to the Nativity set. I was a lesbian-to-be putting yellow and green elephants atop the stable above the angel. I’ve been playing around with manger scenes for a lifetime! We also added hippos, lions, frogs, ducks and even skunks. How queer! Who would have guessed that this childhood game would lead to the Queer Nativity project at the Jesus in Love Blog about 50 years later?!

Note: I played with the cast of characters, but baby Jesus is still at the center.

I hunted through old photo albums for this picture after artist Andrew Craig Williams sent me some queer Nativity photos that he purposely “aged” to make them look like they were taken in the 50s or 60s. He wanted to show that gay Nativity scenes are nothing new.

I still have some of these same rubber animal erasers that were in the old photo. I want to add them to my current Nativity scene and shoot some new photos!

As you can tell, I’ve always loved the animals at the manger scene. I also imagined it in a scene from my novel “Jesus in Love.” It is reprinted in my previous post Animals make peace at Christmas.

Keep coming back for more queer Nativity scenes now through Christmas at the Jesus in Love Blog !
Posted by Kittredge Cherry at 12:09 PM