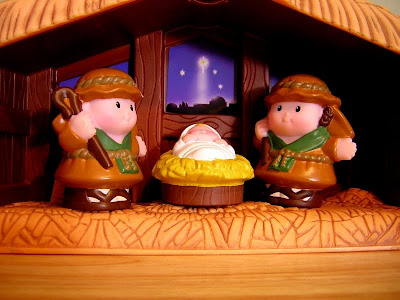 Two happy fathers smile over their new son Jesus in photos by Andrew Craig Williams as the 2011 Queer Nativity series ends at the Jesus in Love Blog.

Seven people from three countries created more than a dozen images to reimagine the first Christmas in liberating, loving new ways that affirm LGBT people. I hope that you had as much fun looking at these pictures as we had creating them! Contributors came from Canada, the United Kingdom and the United States. Some are artists while others created a kind of “folk art” out of the desire to decorate their homes with Nativities that express their faith as LGBT Christians.

Williams is an artist and writer based in Wales who blogs at andrewcraigwilliams.blogspot.com. Jesus really did have two daddies -- Joseph and the God whom he referred to as his “Father in heaven.” Williams provide a joyful, holy image of what gay fatherhood can look like. His gay Nativity scenes restore the childlike wonder of Christmas, a spirit that has been lost by many LGBT people due to discrimination by churches. Every child is the Christ child, including the queer children and the children of gay parents.

These photos grow out of Williams own love for toys. He actually creates toys and other objects as an artist, but in this case he bought a toy Nativity set. Here is how he described it on his blog: “After seeing some lovely pictures of gay and lesbian nativity scenes on Jesus in Love, I wanted my own. It took me two years to find a set I really loved, and finally I now have one. It’s a Fisher Price nativity set, with an extra Joseph ordered from America.”

Happily his gay Nativity set is now out on display in my home, Williams say, “as it will be for years to come.”

In addition to his brightly colored manger scene, Williams played with filters to make the pictures appear old, like photos from the 1950s or 60s. His purpose was “to show that a gay nativity is not new or shocking, just something that people have been celebrating for years.” 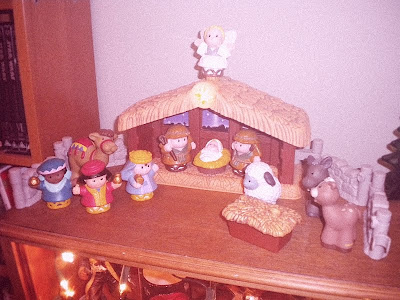 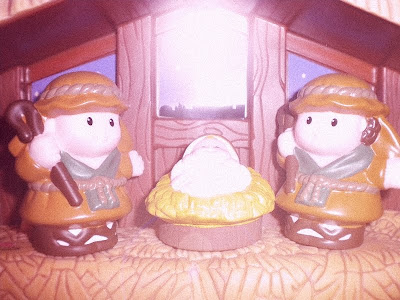 His old-style photos inspired me to dig out a 1962 photo of myself playing with a manger scene as a little girl. Now it’s included in the Queer Nativity series too.

A more adult-oriented queer Nativity by Williams can be seen in our previous post Matthew and Joseph are pregnant. Williams is a frequent contributor to the Jesus in Love Blog. His other work published here includes: "Queer Resurrection."

Keep coming back for more queer Nativity scenes now through Christmas at the Jesus in Love Blog !
Posted by Kittredge Cherry at 12:22 PM