“Gay rights are human rights, and human rights are gay rights,” Secretary of State Hillary Clinton declared in a speech at the United Nations in Geneva this week. She gave the groundbreaking speech about LGBT rights in honor of Human Rights Day, which is today (Dec. 10.)

Clinton is magnificent in outlining and overcoming all objections to LGBT rights as human rights -- including the religious reasons. She stated that religion must not be used to justify violence against LGBT people, but can and should instead serve as a source of compassion.

I see her speech as a dramatic breakthrough for LGBT rights, based on my own experience advocating justice for queer people at the World Council of Churches in the early 1990s as ecumenical director for LGBT-affirming Metropolitan Community Churches. 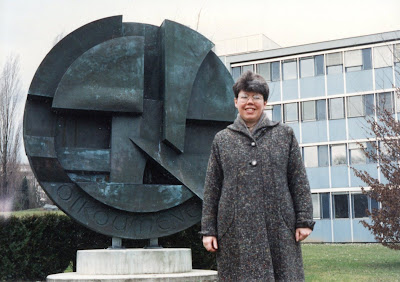 Kittredge Cherry at the World Council of Churches headquarters in Geneva, where she advocated for LGBT rights, February 1994
In a sense I helped pave the way for Hillary Clinton’s LGBT rights speech! The WCC and the United Nations are both based in Geneva and have somewhat similar international structures leading to similar worldviews.

All hell broke loose at the World Council of Churches in 1993 when I asked their human rights committee to address lesbian and gay issues. Now almost 20 years later the U.S. Secretary of State herself has brilliantly answered the many objections they raised. Her speech provides the exact kind of carefully worded ideas that are needed by LGBT rights advocates in international organizations such as the WCC and UN.

Watch her speech on video or read the whole text at this link. Here I will simply quote the section where Clinton talks about religious justifications for violating the rights of LGBT people:

The third, and perhaps most challenging, issue arises when people cite religious or cultural values as a reason to violate or not to protect the human rights of LGBT citizens. This is not unlike the justification offered for violent practices towards women like honor killings, widow burning, or female genital mutilation. Some people still defend those practices as part of a cultural tradition. But violence toward women isn't cultural; it's criminal. Likewise with slavery, what was once justified as sanctioned by God is now properly reviled as an unconscionable violation of human rights.


In each of these cases, we came to learn that no practice or tradition trumps the human rights that belong to all of us. And this holds true for inflicting violence on LGBT people, criminalizing their status or behavior, expelling them from their families and communities, or tacitly or explicitly accepting their killing.


Of course, it bears noting that rarely are cultural and religious traditions and teachings actually in conflict with the protection of human rights. Indeed, our religion and our culture are sources of compassion and inspiration toward our fellow human beings. It was not only those who’ve justified slavery who leaned on religion, it was also those who sought to abolish it. And let us keep in mind that our commitments to protect the freedom of religion and to defend the dignity of LGBT people emanate from a common source. For many of us, religious belief and practice is a vital source of meaning and identity, and fundamental to who we are as people. And likewise, for most of us, the bonds of love and family that we forge are also vital sources of meaning and identity. And caring for others is an expression of what it means to be fully human. It is because the human experience is universal that human rights are universal and cut across all religions and cultures.

A few LGBT leaders have criticized Clinton’s speech as hypocritical, considering the ongoing violations of LGBT rights in the United States. However, Clinton acknowledged in the speech, “I speak about this subject knowing that my own country's record on human rights for gay people is far from perfect….We, like all nations, have more work to do to protect human rights at home.” I see her speech as a big step in the right direction.
Posted by Kittredge Cherry at 10:23 AM

Great job as usual, Kitt!! Jan and I still have a couple of faded "Hillary for President" signs in the front windows of the house. I've wanted to take them down for ages, but Jan is adamant that they stay up. And every time I think that I'm finally just going to insist they come down, the woman up and gives a speech like this and makes feel like maybe Jan's right- they should be up there permanently.

Honestly, I don't think you can overstate how important this is- how ground breaking, how consequential. And to do it in conjunction with Human Rights Day - to set the US government and this administration and herself permanently on record as standing for the rights of lgbt people as basic human rights, especially given the political situation in this country, and the central role that scare tactics against the "gay agenda" have played in driving our politics for the last 20 years.... well wow. Just wow, wow, wow. And you're also completely right to reference your work and the work of MCC as having paved the way. The religious arena has *always* been the most difficult and, sadly, the most dangerous one in which to insist on the righteousness and sacredness of same sex relationships and the dignity, worth, full humanity and decency of lbgt people. And MCC and people like you and Nancy Wilson and Troy Perry and Marsha Stevens and alot of less well known others have been patiently doing just that, both nationally and internationally, for a long, long time- going clear back to the time when admitting to being gay was - quite literally- to admit to being a criminal. All credit honor and respect to all of you for having been willing to do this work for so long and for helping to make this possible.

I, too, think Clinton's speech was extremely powerful and totally on target. Despite it's length, I think it is well worth listening too, as I said when I posted the link to my own Facebook page. Brilliant!

I am overwhelmed by all the affirmations here and on my my Facebook page! I feel like I’m getting more gratitude for my work from folks now than I did back then, when I was actively attending WCC meetings around the world. Maybe it’s because the Internet is making communication so much easier than it was 17 years ago… and also because more people understand the LGBT aspect of human rights. Thank you, CJ and Trudie, for taking time to leave your wonderful comments here.

@Trudie, you’re right about the length of Hillary’s speech. I found the speech easier to digest by reading the text.