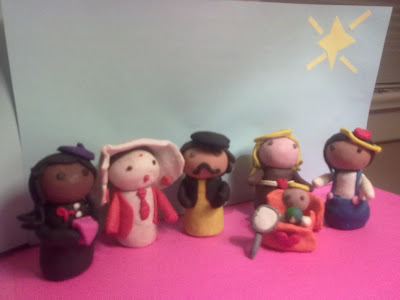 “Queer Nativity” by Anonymous
Three queer Magi bring gifts to Mary, Josephine and baby Jesus in a Nativity scene sculpted by an anonymous artist as the LGBT Nativity series continues at the Jesus in Love Blog.

A series of queer manger scenes are being posted here before Christmas to reimagine the Holy Family in liberating, loving new ways.

The artist started from scratch and used plasticine to create a Nativity in which everyone’s gender is ambiguous. Instead of the traditional three kings, her Magi are a drag king, a drag nun and a LGBTQ-rights activist.

The artist’s vision is grounded in historical reality. Biblical scholarship suggests that the Magi were eunuchs -- people who today would be called gay or transgender. The Magi played the shamanic role often filled by eunuchs, an ancient term for GLBT people. For more about queer Magi, see our previous post “Epiphany: 3 kings or 3 queens?”

The artist updates the symbolism of the three Magi by creating these characters:


Gold is for Jesus as king. Queer kin(g)ship is represented by a mustachioed Magi who is a drag king or maybe a transman.

Frankincense is for Jesus as priest. The orange drag nun Magi is Sister Unity of the Sisters of Perpetual Indulgence. “She is someone who represents priestly-ness to me,” the artist explains.

Myrrh foretells the death of Jesus. The activist Magi wears a pink triangle and commemorates those lost to HIV/AIDS, homophobia and transphobia.

The Magi visit a Holy Family named Jesus, Mary and Josephine. “I gave Mary suspenders because you can't tell if it's with a skirt or pants. Josephine could be wearing a dress or a robe, whatever you like! They all have halos because halos symbolize the aura of love. Jesus is holding the world because Jesus loves everyone in it. I also added a mirror to his crib because I felt that the colour was political...so I figure it's better to make room at the Inn for all of us,” the artist says.


Click the following headlines to see other images in the Queer Nativity series:

There was no room at the inn for the Holy Family, and there is no room in many churches today for LGBT people who want to get closer to Jesus.

Keep coming back for more queer Nativity scenes now through Christmas at the Jesus in Love Blog !
Posted by Kittredge Cherry at 12:37 PM