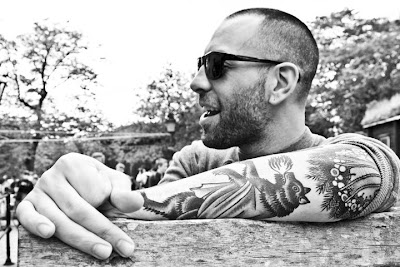 Noah Michelson
Queer saints are going mainstream with a major article at Huffington Post, a news website that gets more than 35 million visitors per month.

“Joan of Arc and 9 Other ‘Queer’ Saints” by Noah Michelson was posted there this month for Christmas. It is a valuable overview with a slideshow of 10 queer saints (all names listed below).

Michelson introduces the concept of queer sainthood by saying, “While many would freely admit that most of the men and woman of yore were not gay or transgender as defined by our modern standards, they would assert that these people were involved in non-heteronormative relationships, presented non-traditional gender identities, or understood, approached, and complicated aspects of faith with relation to sexuality and/or gender identity.”

, and other publications. Before joining the Huffington Post, Noah served as Senior Editor at Out magazine and he has also contributed to Details and served as a commentator for the BBC.

Kittredge Cherry: Why did you decide to write about queer saints?

Noah Michelson: I grew up in a strange environment as far as religion is concerned: I was raised half Jewish (my father), half Lutheran (my mother) and I attended Catholic school for 10 years.

So, I had a lot of religion -- and a lot of conflicting ideas -- coming at me from the very beginning.

I learned to love aspects of all three religions and I was obsessed with the saints when I was younger. There was something so simultaneously morbid and hopeful about their lives that mystified me.

So, that's part of the reason and the other part is that as someone who has a background in queer theory and queer activism, I think it's important to approach, understand, complicate, and re-appropriate history when and where possible in order to see ourselves.

So much of queer history has been deleted, bleached, and hidden and so a piece like the Queer Saints slideshow lets us (re)consider what it might mean for there to have been figures in history who were living what we might now call "queer lives."

KC: What reactions did you get from Huff Posts editors and readers?

NM: Many people found the piece incredibly intriguing and hadn't heard of queer saints before.

Some thought it was unfair to examine or classify these people's lives in this way as they didn't live "queer lives" as we understand them today.

And there were some who were offended by it.

However, to those people I ask what is offensive? The idea that religious figures could have been queer? I find _that_ to be offensive.

The 10 queer saints in the HuffPo slideshow are:
Joan of Arc
Wilgefortis/Uncumber
Sergius and Bacchus
Anselm of Canterbury
Apollinaria/Dorotheos
Alcuin Of Tours
Cardinal Newman
Julian of Norwich
Paulinus Of Nola
Symeon of Emesa and John

Most of these same saints are also covered in the LGBT Saints series by Kittredge Cherry at the Jesus in Love Blog. Saints, martyrs, mystics, heroes, holy people, deities and religious figures of special interest to lesbian, gay, bisexual and transgender (LGBT) and queer people and our allies are covered on appropriate dates throughout the year.
Posted by Kittredge Cherry at 1:01 PM