Day 2: Jesus drives out the money changers and preaches in the Temple (Gay Passion of Christ series) 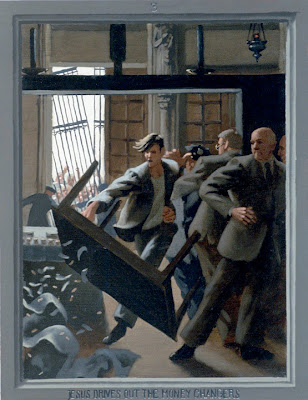 3. Jesus Drives Out the Money Changers (from The Passion of Christ: A Gay Vision) by Douglas Blanchard
“He poured out the coins of the money-changers and overturned their tables.” -- John 2:13 (RSV)

An angry modern-day Christ figure disrupts business in “Jesus Drives Out the Money Changers” from “The Passion of Christ: A Gay Vision,” a series of 24 paintings by Douglas Blanchard. Jesus, hair flying, overturns the tables of money. Coins scatter, bills flutter away, and the men in suits run. A crowd in the background yanks away the barred gate that separates them from the wealthy money managers. One security guard struggles to keep out the mob -- what today’s Occupy Movement would call “the 99 percent.” Another officer reaches to grab Jesus by the shoulder.  Jesus looks like a freedom fighter standing for justice against Wall Street’s greed.

The Biblical Jesus attacked the money changers in the temple, not in a secular marketplace. But banks hold more wealth than churches in our world, so it makes sense that Blanchard creates a setting that looks like a modern bank with classic columns and statues.

The money changers of first-century Jerusalem exchanged foreign currency for the temple coins that were acceptable for offerings. They made big profits by using a high exchange rate and adding service charges. Priestly authorities also got a percentage of the transactions.

Nothing made Jesus angrier than religious hypocrisy. When he saw the money changers taking advantage of people’s faith in God, he exploded. It was the only time that Jesus used physical violence in the Bible. All four gospels describe what is commonly called “the cleansing of the temple.” Jesus poured out the coins of the money changers and turned over their tables. Then he made a whip of cords and used it to chase them out, along with the sacrificial animals and those who sold them. He said, “It is written, ‘My house shall be called a house of prayer,’ but you make it a den of robbers.”


“It is written, ‘My house shall be called a house of prayer,’ but you make it a den of robbers.” -- Matthew 21:13 (RSV)
Jesus acted up when he saw something wrong. Nothing made him angrier than religious hypocrisy blocking the way to God. He got mad when religious leaders made people pay to attend worship. He said, you can’t buy your way to heaven! Everyone gets God for free. Don’t trick a poor widow into giving her last penny! The sacrifice that pleases God is to do justice and love people. Oh sure, you can raise tons of money by claiming that some other group is an unholy threat: lepers, immigrants, queer. But remember, whatever you do to the least of these, you do to me! Stop demonizing people! You call gays an abomination, but your fundraising tactics are the real abomination! Hypocrites! You’re like fancy tombs, pretty on the outside, but full of death on the inside. Then he turned over the tables where the men in suits made their unholy profits. Coins went flying as he drove them out.
Jesus, thank you for your anger. Give me the courage to act up against injustice.
___ 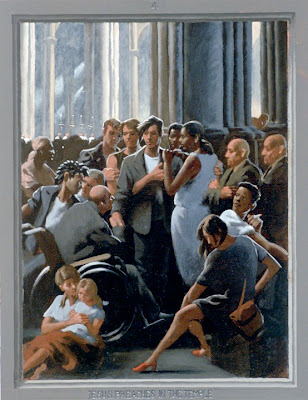 4. Jesus Preaches in the Temple (from The Passion of Christ: A Gay Vision) by Douglas Blanchard
“And he was teaching daily in the temple. The chief priests and the scribes and the principal men of the people sought to destroy him; but they did not find anything they could do, for all the people hung upon his words.” -- Luke 19:47-48 (RSV)

An attractive young teacher distracts church-goers from a worship service in “Jesus Preaches in the Temple” by Douglas Blanchard. Jesus, looking like an urban hipster, welcomes the people who crowd around and touch him. The title says that Jesus is preaching, but he stands quietly among them, mouth closed, communicating compassion with his presence. Blue tones create a peaceful mood. Large pillars and arches suggest that they are in the aisle of a modern cathedral. Far in the distance on the left, a row of priests carries candles or shiny processional crosses, as happens in a contemporary cathedral at the start of worship or mass. But many people are more interested in Jesus. A man peeks around the pillar on the back right to see who is causing all the excitement.

The realistic faces and gestures of Jesus’ listeners invite speculation about their lives. Two gay couples wrap Jesus in a loving embrace: a white couple on the left and a black couple on the right. Jesus puts his arm around one of the blacks while a balding man in a wheelchair shakes his other hand, perhaps in search of healing. Even cool guys with a spiky mohawk or a cigarette are drawn to this Christ. Others sit in front, just wanting to be near Jesus: A mother and daughter on the left, and on the right a downcast figure in red high heels whose tall, awkward body suggests a drag queen or a transwoman.

But all is not well. Two bald men eavesdrop, arms crossed. Their suits suggest that they are businessmen, but they could easily be church bureaucrats. They look like the money changers that Jesus attacked in the last painting. These two guys might even be another gay couple, but a conservative and perhaps closeted gay couple with a stake in the status quo. Whatever their identity, they are the modern counterpart of the elders, scribes, lawyers, priests and Pharisees in the Bible who observed Jesus in the temple, looking for a way to destroy him.

The two-fold message that the Biblical Jesus taught was love and justice. Blanchard’s “Jesus Preaches in the Temple” painting functions as a counterpart to the previous image of Jesus driving out the moneychangers. He stood for justice against the money changers before, and here he stands for love. The Bible records many words of wisdom that Jesus preached in the temple, but he himself said the most important lesson was this: Love God with all your heart, and love your neighbor as yourself.

This painting raises the question: What would happen if Jesus walked into a church of today? The general consensus is that he would disrupt the established order. Not many Christians would want to listen to a sermon or eat a wafer if the had a chance to see, hear and touch the living Jesus. But those who gain power by speaking for Jesus might not welcome the change.


“And he was teaching daily in the temple.” -- Luke 19:47 (RSV)
All kinds of people crowded around Jesus when he taught at the temple: male and female, young and old, rich and poor, healthy and sick, people from every race and nation -- and the queer ones: women who acted like men, men who acted like women, those who loved someone of the same sex, those with bodies somewhere between male and female. People lumped all of the queers together and called them “eunuchs.” Jesus said some of us were born eunuchs, some were made into eunuchs by others, and some made themselves into eunuchs. He never spoke a word against homosexuality. He just taught about love: Love God, love your neighbor as yourself, love your enemies. Religious leaders felt threatened by his absolute love, but his words and his touch healed people. The religious leaders listened too -- hoping he would say something that they could use to silence him.
Christ, teach me, touch me!
More resources:
Homosexual Eunuchs - Did You Know That Some Eunuchs Were Gay Men Or Lesbians? (GayChristian101.com)

___
This is part of a series based on “The Passion of Christ: A Gay Vision,” a set of 24 paintings by Douglas Blanchard, with text by Kittredge Cherry.  For the whole series, click here.

Scripture quotations are from Revised Standard Version of the Bible, copyright © 1946, 1952, and 1971 National Council of the Churches of Christ in the United States of America. Used by permission. All rights reserved.
Posted by Kittredge Cherry at 11:42 AM

During this year of Presidential politics, this reflection has special power for me. Not a day goes by that I don't receive several fundraising requests. I am utterly appalled at the intense insistence that only millions of dollars can assure a free and fair election -- when I know for a fact that the more it depends on money, the less fair it will be. I believe that every protest is important. Thanks again for sharing Doug's powerful imagery!

Yes, it's amazing how timely these paintings are... even as times change. Doug painted these about 10 years ago, but they could be scenes from today's Occupy Movement. I guess some things -- like power and money corrupting people -- never change.

I find it striking that the first time he preached in the temple, he took as his text Isaiah 61:1, saying, "The Spirit of the Lord is upon me; he has anointed me to tell the good news to the poor. He has sent me to announce release to the prisoners and recovery of sight to the blind, to set oppressed people free" (Luke 4:18).

This is the foundation and the essence of his message. Elsewhere, he frequently made clear his lack of respect for arbitrary religious rules: for him, the demonstration of love, respect and justice for all were far more important. During Holy Week in particular, we recall that this attitude got him into a great deal of trouble with the religious authorities of the day.

In the same way that he was angered by the money changers who had undermined the true purpose of the temple, I am certain that he would be angered by the religious authorities of our own day, who undermine his core message of freedom from oppression, to entrench discrimination and promote hatred and partisan political messaged.

Hope I'm not splitting hairs here... but in every version I've ever read Luke 4:18 occurs NOT in the Temple, but in a synagogue in Nazareth.

I think, however, your point is excellent.