Day 7: Jesus is Buried; Jesus Among the Dead (Gay Passion of Christ series) 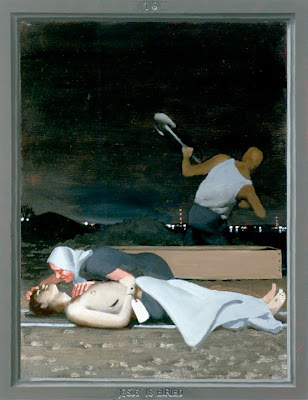 This scene is not found in the Bible, but it is a traditional subject in art history known as the Lamentation. The standard Lamentation shows Jesus on a shroud before his tomb while Mary bends to kiss his face. The Pieta, which shows Mary cradling his body, is a special type of Lamentation. The subject was especially popular in Christian art from the Middle Ages to the Baroque era. The gospels do report that women were the first to visit Jesus’ tomb.

“They took the body of Jesus, and bound it in linen cloths with the spices, as is the burial custom.” -- John 19:40 (RSV)
After Jesus died, the authorities allowed one of his friends to take his body for burial. Almost all of his many supporters were gone. Jesus’ body was laid to rest in a fresh tomb at sundown, just before the sabbath began. When they buried him, they also buried a beautiful part of themselves. Sometimes the humiliations continue even after death… when homophobes picket the funerals of the LGBT people and other outcasts, when mortuaries refuse to handle the bodies of AIDS patients, when families exclude same-sex partners from memorial services, on and on. Jesus understood grief and didn’t try to suppress it. He said, blessed are those who mourn, for they will be comforted.
Jesus, I wait in silence at your grave. 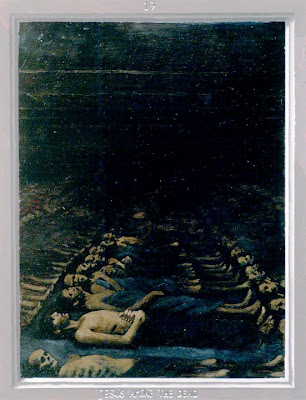 17. Jesus Among the Dead (from The Passion of Christ: A Gay Vision) by Douglas Blanchard
Endless rows of corpses fill an almost-black image in “Jesus Among the Dead.” Even in death, Jesus is not separate from humanity. He lies with the stink, the dead bodies, and the skeletons. This must be hell, or some human holocaust. Perhaps there is no difference.

The Bible doesn’t tell what Jesus experienced between crucifixion and resurrection, but many artists and theologians over the centuries have been eager to imagine it. The Apostle’s Creed clearly states, “He descended into hell,” or in another translation, “He descended to the dead.” The subject is traditionally known as the Harrowing of Hell, when Christ descends to hell or limbo to rescue the souls held captive there since the beginning of time. Blanchard based the composition on photographs of the Holocaust, especially photos of the dead laid out in long rows after the liberation of the Nazi concentration camp at Nordhausen in 1945.

There are many hells and many types of limbo in which people are trapped neither fully alive nor dead. For example, the US Supreme Court overturned state sodomy laws in 2003, but same-sex marriage is still illegal in almost every state, leaving most LGBT people to exist in a non-quite-legal limbo.

“For everything there is a season, and a time for every matter under heaven: a time to be born, and a time to die...” -- Ecclesiastes 3:1-2 (RSV)
Like all human beings, Jesus eventually had to experience death. In effect, it was like he was buried in a mass grave with all humankind -- saints and sinners, gay and straight, male and female, all of us without exception. His body rested in peace with the other corpses. Jesus didn’t believe death was the end. During his lifetime, he often talked about the afterlife. He said he would always be with us, connected like a vine connects to a branch. But when his body lay cold in the tomb, his friends simply missed him.
God, even death cannot separate me from your love.
___
This is part of a series based on “The Passion of Christ: A Gay Vision,” a set of 24 paintings by Douglas Blanchard, with text by Kittredge Cherry.  For the whole series, click here.

Scripture quotation is from Revised Standard Version of the Bible, copyright © 1946, 1952, and 1971 National Council of the Churches of Christ in the United States of America. Used by permission. All rights reserved.
Posted by Kittredge Cherry at 4:23 PM

Due to the time zone differences between East and West Coast, I didn't get to see this blog entry until now, when I chose to get up for my own private "Sunrise Observance".

One reflection I would like to add. In Cynthia Bourgeault's marvelous book, "The Meaning of Mary Magdalene", she recounts her sudden revelation upon hearing the reading of an often overlooked scripture, Matthew 27:61: "Mary Magdalene and the other Mary were there, sitting opposite the tomb." The "other Mary" so casually mentioned is probably the one cited earlier as "the mother of James and Joseph" - who could also have been Jesus' mother, given other scriptural references to "Jesus' brothers".

I have also become completely enthralled by your description of the encounter between Jesus and Magdalene as he leaves the tomb, recounted so magnificently in "Jesus in Love". I have always been unsatisfied by the way in which the gospels in general and modern-day theology in particular have overlooked the pivotal role of the women who were both the last of Jesus' followers at the Cross, and the first ones at the Empty Tomb on Resurrection Morning. I am seriously contemplating the idea of doing a painting to illustrate Magdalene's healing and anointing of the Risen Christ as you so brilliantly describe it. If I accomplish this, you will of course be the first to see my efforts.