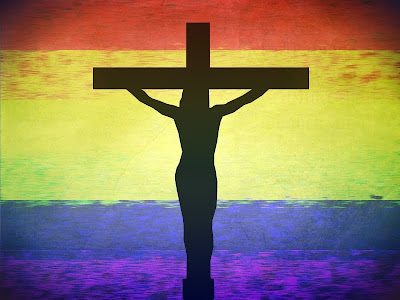 “Queer Jesus” by Andrew Craig Williams
“Was Jesus gay? Probably,” a major article at the Guardian by an Anglican priest, is getting a lot of attention this week.

Paul Oestreicher, a chaplain at the University of Sussex in England, wrote that Jesus was most likely gay, based on his relationship with his disciple John.

Here’s a quote from the original article posted on April 20 at the Guardian, one of the most popular British news sites:

After much reflection and with certainly no wish to shock, I felt I was left with no option but to suggest, for the first time in half a century of my Anglican priesthood, that Jesus may well have been homosexual. Had he been devoid of sexuality, he would not have been truly human. To believe that would be heretical.
Heterosexual, bisexual, homosexual: Jesus could have been any of these. There can be no certainty which. The homosexual option simply seems the most likely. The intimate relationship with the beloved disciple points in that direction. It would be so interpreted in any person today.
Oestreicher goes on to say that Jesus’ sexual orientation doesn’t matter, except to remind the church to openly accept gay and lesbian Christians today.

I am glad to see one more important church leader acknowledging the likelihood that Jesus was homosexual. When more people welcome the possibility of a queer Christ, then more people will also be able to see the Christ within us queers.

Jesus appears as a silhouette on the cross against a fractured rainbow sky in “Queer Jesus,” the image at the top of this post. It was created by Andrew Craig Williams, a queer artist, writer and music maker based in Wales who blogs at andrewcraigwilliams.blogspot.com.

Paul Oestreicher was once invited to be bishop of Wellington here in New Zealand, but the Puritans got their way and he went back to England. NZ's great loss! A wonderful man with a clear insightful mind - a brilliant academic and a total lover of all people. No wonder he never got wear the pointed hat.

Thanks, Br G-M, for bringing a perspective from New Zealand where Paul Oestreicher grew up. He has an interesting life story. He was born in Germany in 1931, but had to leave when he was about seven years old because of his father’s Jewish ancestry, and the family moved to New Zealand. At least now people all around the world can share in his wisdom through the Internet.

It was good, and timely that Oestreicher said what he said, but I can’t agree Christ's sexual orientation doesn't matter. It matters for two reasons 1) it affects how we understand Jesus and incarnation 2) if Jesus were at all provably non-heterosexual it would more than anything help resolve the endless and acerbic gay/Christianity debate. Of course, one would need to be very sure and have a strong case.

As a doctor of religious studies I have given the strongest possible case Jesus was gay from both a theological standpoint, (especially close reading John’s gospel in a way not usually done), and evidence from some ultra-descriptive astrology radically developing the widely accepted D’Occhieppo/Hughes thesis re when Christ was born - see my “Testament of the Magi”. The latter includes over 450 name, place and concept asteroids any non-astrologer can grasp all accurate and relevant. I’ve even forecast Christ events to this day from the statistically improbable pattern. So the case is overwhelming, should be heard and some attempt made to understand it. But this is signally not the case, not least by gays who should have some interest and lend support. From Huffington Post with its "Gay Voices" to various leading gay groups and churches I could name I am not heard or allowed any voice. Gays are not replying or even curious, which makes one wonder how sincere they are about their Jesus. Is he to be known intimately or just used as a name or icon supporting whatever they want. Apart from some Tweets and F/B, a week ago I personally alerted around 15 different people and groups of the following article at
http://bit.ly/IrGqUX
which told the truth about the Corpus Christi film which defends a gay Jesus thesis through profanity and irreverence only, and gave the real, more historical and reverent response.

Who answered? The terrible Peter LaBarbara of Americans for Truth who said he would be reading it (may it do him good!) and Rick Breitlinger of Gay Christian 101. I can’t even get “friends” of F/B to respond. The situation is an outrage and a blot on this community.... OK, there’s this much excuse that astrology sounds alienating to some, but they might at least be curious to see if there was something there and trust as an academic I don’t aim to mislead them. I am reminded of the Catholic astrologer who said to me, “I’ve always seen Jesus as an icon. I can’t look at Jesus so closely as this. Maybe one must be Protestant”. I’m more of the opinion maybe in this case you have to be gay to be quite so closed, blind or other things I won’t say because I feel rather disgusted…a bit like Christ on his generation: “we played the flute to you and you did not dance….etc.” (Matt 11:17). Gays don’t like censorship. In turn I don’t like the gay censorship. Hypocrisy by any other name, alas!

Rollan, this post certainly got you thinking. I agree that Jesus’ sexual orientation does matter, especially with conservative using Christ as a weapon for spiritual gay-bashing. But I know what Oestreicher meant: Jesus’ life and teaching are equally valid whatever his sexual orientation.

As far as the astrological evidence of Jesus being gay, I do think many Americans dismiss astrology as nonsense. And it is hard to get recognition in the gay community, even with all this supposed access through social media. Your situation reminds me of this advice from Jesus in Mark 6:11: “If any place will not welcome you or listen to you, shake the dust off your feet when you leave, as a testimony against them.”

I left a new comment on your blog about your Corpus Christi piece.