,” a drama about a closeted gay seminarian’s search for love, was released on DVD this week.

Ryan, the title character, is completing a thesis on “The Divine Gift of Love” at an evangelical seminary while struggling in a relationship with a man who won’t commit. Questions of love, loneliness, faith and suffering are illuminated by Ryan’s interactions with his distant gay lover, two gay classmates, and the devout mother who doesn’t know about his sexual orientation. 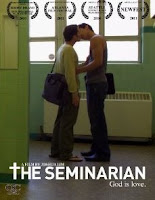 Surprisingly, these evangelical seminarians apparently feel no conflict over being gay and Christian. The Bible passages used to condemn homosexuality are barely even mentioned. They don’t worry much about whether to stay in the closet either. Coming out issues do arise, but in true 21st-century style, these young gays show no paranoia about hiding their sexual orientation, even in a hostile seminary setting. They’re not even worried about using their degrees to get a job after graduation. Ryan focuses on a more universal question: How can love be a gift from God when it causes so much suffering?

This is a sweet, slow-paced film with no gratuitous sex. It would probably qualify for an R rating based on brief male frontal nudity and some low-key sex scenes. The film grows out of first-hand experiences at a conservative seminary. Writer-director Joshua Lim recently attended Fuller Theological Seminary in Pasadena, California, where the movie was shot. Lim was born in Malaysia and raised in Singapore.

Viewers with seminary degrees will get a kick out of the film’s valiant efforts to show the drama within such intellectual labors as library research and writing a master’s thesis in theology. Many may find understated inspiration here.
___
Related link:
Trailer for The Seminarian

Posted by Kittredge Cherry at 11:05 AM

"Surprisingly, these evangelical seminarians apparently feel no conflict over being gay and Christian." Haha, I'll say. I don't get how one can go to seminary and not see how lying with another man is sinful. I just don't.

I can't resist a response here. Jesus has lots to say about how lying (as in being hypocritical) is sinful. But it doesn't depend on the gender of the liars. So, the real sin is, always, pretending to be who, or what, you are not - or refusing to acknowledge your own reality. I can't help asking: What DO THEY TEACH in the seminary with which Tejas is familiar?

An ethical dilemma in “The Seminarian” arises because one of the professors actually advises Ryan to keep quiet about being gay -- that is, to lie. This is true to life in my own seminary experience at Pacific School of Religion, where a visiting professor also advised LGBT seminarians to lie and stay in the closet. She justified it by saying that other people had an inaccurate view of homosexuality, so it wasn’t a lie to say we weren’t like that. Anyway, Trudie, you’re right to wonder WHAT DO THEY TEACH in seminary these days?