Day 4: Jesus before the priests, magistrate and people (Gay Passion of Christ series) 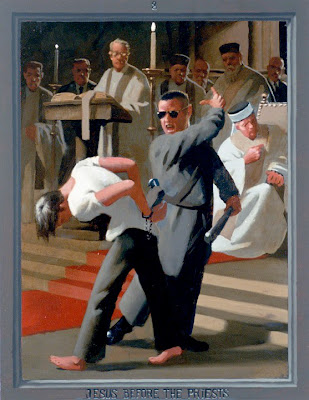 8. Jesus Before the Priests (from The Passion of Christ: A Gay Vision) by Douglas Blanchard
“One of the officers standing by struck Jesus with his hand, saying, ‘Is that how you answer the high priest?’” -- John 18:22 (RSV)

A guard hits Jesus in a church while clergymen do nothing, indifferent to the violence, in “Jesus Before the Priests” from “The Passion of Christ: A Gay Vision,” a series of 24 paintings by Douglas Blanchard. The blow is so hard that Jesus doubles over. The guard’s dark sunglasses cannot hide his hateful grimace. A bespectacled priest looks up from an open Bible, but his bland face registers no concern for Jesus. Another priest purposely ignores the assault, studying his fingernails. Red carpet on the steps leads to an altar with candles. Watching from the back are more white-robed priests and men in business suits.

This is one of the more shocking images in Blanchard’s Passion series because it exposes blatant hypocrisy in a familiar setting. The church and its priests look familiar, maybe even comforting or boring. We have been there. But we haven’t seen what would happen if Jesus showed up there today in person as a young man. One might expect violence from police or soldiers, but not from ministers in a church sanctuary. But in the banality of evil, unspeakable acts are committed not by monsters, but by ordinary people who accept the premises of an institution.

Religions have condemned LGBT people and others as “sinners,” and then refused to accept responsibility for the violence that they incited. A recent example occurred in Uganda, where a law that imposed the death penalty for homosexuality was drafted under the influence of Christian conservatives from America. Church trials for homosexuality continue in America too. In a highly publicized trial the Presbyterian church ruled in February 2012 that Rev. Jane Spahr violated their constitution by performing same-sex marriages.

“Jesus Before the Priests” is a counterpart to the Biblical story of Jesus’ trial in the before Caiaphas, the high priest, in the religious court of the Sanhedrin. After lengthy questioning they condemned Jesus for blasphemy and sent him to the Roman authorities for sentencing.

“Then the high priest tore his robes, and said, ‘He has uttered blasphemy.’” -- Matthew 26:65 (RSV)
The police arrested Jesus and took him straight to the priests -- the ones that Jesus had often accused of hypocrisy. They rigorously enforced minor laws, while neglecting the purpose of the law: justice, love and faith. They were like today’s church officials who put ministers on trial for blessing same-gender relationships or ordaining lesbians and gays. The priests interrogated Jesus for hours, trying to get him to say something that could be used against him. When they asked about his teachings, Jesus replied, Why ask me? Ask those who heard me. At that, an officer struck him, snarling, Is that how you answer the high priest?! The priests watched the violence with bland indifference. There were some good men among them, but they accepted their role as part of the system. They kept silent as evil triumphed again. Violence in God’s name was routine. The unthinkable had become normal.
God, I listen to YOU, even when it goes against what the priests say. 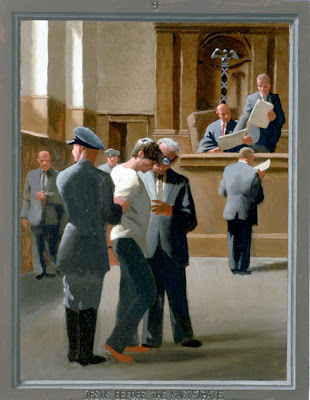 9. Jesus Before the Magistrate (from The Passion of Christ: A Gay Vision) by Douglas Blanchard
“Now Jesus stood before the governor.” --Matthew 27:11

A young defendant consults an attorney in “Jesus Before the Magistrate.” Jesus is caught between his lawyer and a guard wearing Nazi-style knee-high boots. Dull men in suits are shuffling papers, but nothing seems to happen in the generic courtroom. All of them, even the judge, look like pawns in Kafkaesque bureaucracy. A post behind the judge’s bench is topped by an eagle, a symbol shared by imperial Rome -- and the United States.

The Biblical parallel for this painting is Jesus meeting with Pontius Pilate, the Roman governor. Pilate has been portrayed as the villain that you love to hate in Passion plays and movies, played by the likes of Telly Savalas in “The Greatest Story Ever Told.” In Blanchard’s painting the judge is too bland to make a memorable villain. It is in this antiseptic setting, impartial to a fault, that Jesus is found guilty of treason and sentenced to death.

“And they began to accuse him, saying, ‘We found this man perverting our nation.’” -- Luke 23:2 (RSV)
The priests took Jesus to the magistrate, Pilate, demanding that he impose the death penalty. His government headquarters was bustling with dispassionate bureaucrats. For Jesus, the only law was love -- outright love for God and for people. He kept quiet in this alien place where loveless laws led to injustice. They used the legal system to force an uneasy “peace” on the local people, suppressing their culture and their very identity. Pilate’s lawmakers were like those who devised today’s “don’t ask, don’t tell” policy or “defense of marriage act.” Pilate came from just such a narrow-minded viewpoint when he asked Jesus, What have you done? Jesus answered, I have come into the world to bear witness to the truth. Puzzled, the magistrate posed another question: What is truth?
Jesus, show me your truth. 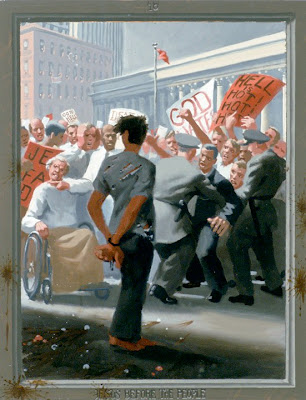 A mob turns against their former hero in “Jesus Before the People.” Jesus stands alone, handcuffed and motionless in the shadow, his back to the viewer, as he faces the angry crowd outside the courthouse. They are enraged, shouting, shaking fists, and waving signs with messages such as “Hell is hot, hot, hot!” Someone flips the finger at him in front of that sign, adding an obscene gesture. Another begins, “God hates...” with the last word hidden by the mob and a fist blocking it. The viewer can fill in the blank -- this mob could be turning against any disadvantaged group.

A man in a wheelchair points a finger sideways, signaling to cut his throat or get the hell out. Police struggle to stop the hostile crowd from killing Jesus right there. The crowd is multi-racial, but all male, which is realistic for mass street violence. Eggshells, squashed tomatoes and other debris litter the ground after being hurled at Jesus. Even the frame looks like it is spattered with eggs and gunk in a trompe l’oeil (fool the eye) artistic technique. Slashes are ripped into the back of his white T-shirt. His head is haloed by one of the “death” signs. The windows of a nearby office building are filled with people watching. A banner that says “Death” hangs between two windows.

The words on the signs suggest that Jesus is a gay man being jeered by fundamentalists. The signs are reminiscent of Westboro Baptist Church, led by Pastor Fred Phelps, who is infamous for picketing AIDS funerals with “God hates fags” signs. By scapegoating queers, the bullies maintain power. The scene is all the more tragic because the crowds adored Jesus less than a week earlier when he entered the city.

May be one of the few scenes that doesn’t have an exact parallel in art history. This could be an “Ecce homo” scene, although that normally comes after the flagellation. The order of events differs in various gospels.

“But they shouted all the more, ‘Crucify him.’” -- Mark 15:14 (RSV)
How quickly the people turned against Jesus! A week ago the crowds adored him. Now a mob was outside the government headquarters demanding his death. Pilate, the magistrate, wanted above all to maintain security. He made Jesus stand before the angry throng. They shouted with increasing frenzy: “Crucify him!” The chief priests stirred up the crowd, vehemently accusing Jesus of all kinds of sins. “He’s a traitor! Burn in hell!” Their words still echo today when hate-mongers tell ruthless lies: “God hates gays! Death to fags!” The magistrate saw that a riot was beginning. If one person had to die to keep the peace, then the end justified the means. Guilt or innocence was not part of the equation. The magistrate agreed to the demands of the crowd. He ordered the execution of Jesus.
Jesus, help me see my own capacities for good and evil as truthfully as I can.
___
This is part of a series based on “The Passion of Christ: A Gay Vision,” a set of 24 paintings by Douglas Blanchard, with text by Kittredge Cherry.  For the whole series, click here.

Scripture quotation is from Revised Standard Version of the Bible, copyright © 1946, 1952, and 1971 National Council of the Churches of Christ in the United States of America. Used by permission. All rights reserved.
Posted by Kittredge Cherry at 12:52 PM

The painting of "Jesus Before the Magistrate" brings to mind your delicious description from "At the Cross" in which Jesus is taken to Pilate's private office for further interrogation. You described Jesus' reaction to the statues, complete with a few demons confused by their human likeness. I can't help relating this to the painting in which the people are so static that they might as well be statues or stuffed manikins.