Day 6: Jesus goes to his execution, is nailed to the cross, and dies (Gay Passion of Christ series) 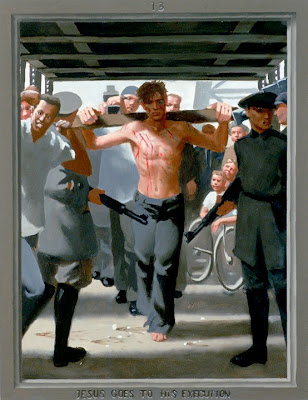 The Bible records that Jesus was forced to walk to the execution grounds carrying the cross on which he would be crucified. The story emphasizes that people play a role in their own oppression. For LGBT people, it is a solemn reminder that persecution includes being forced to carry our own crosses by internalizing homophobia as self-hatred and guilt.

“So they took Jesus, and he went out, bearing his own cross, to the place called the place of a skull, which is called in Hebrew Golgotha.” -- John 19:17 (RSV)
The soldiers made Jesus walk to the execution grounds. They forced him to carry the cross on which he would be crucified. It was big news and crowds gathered along the road. They had watched Jesus rise to mass popularity, and now they wanted to see his fall. Almost everyone jeered at him. Surely some of the hecklers had been among his followers. Maybe they shouted louder than the rest to prove that they were not associated with Jesus -- like closeted lawmakers who loudly oppose LGBT rights. The crowd also included some women who wailed in grief. Jesus turned to them and said, don’t weep for me, but weep for yourselves.
God, my heart breaks when I remember how Jesus died. Create in me a new heart with greater ability to love. 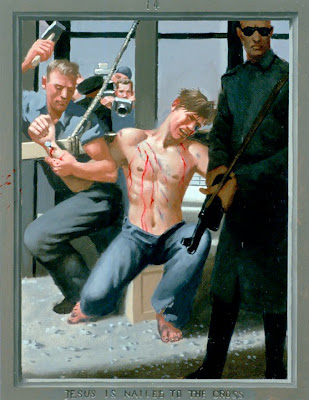 14. Jesus is Nailed to the Cross (from The Passion of Christ: A Gay Vision) by Douglas Blanchard
Bruised and bleeding, a condemned man cries out in agony as a spike is hammered through his wrist in “Jesus is Nailed to the Cross.” The guard shows no emotion as he pounds a cruel spike through human flesh and bone. A shadowy guard in sunglasses keeps people away with a rifle while paparazzi eagerly record the horror from behind. Even the frame appears to be spattered with blood.

“There they crucified him.” -- Luke 23:33 (RSV)
The soldiers nailed Jesus to the cross. It was high noon on Friday. The pounding of the hammer left no room for neutrality. People were forced to choose sides, us versus them. If you didn’t want to be a victim, you had to join the perpetrators. The psychic terror extended to everyone who watched. By abusing one person, the authorities intimidated everyone like him, everyone who was different in any way… religion, race, gender, sexual orientation, whatever. And what about the men who nailed him to the cross? Their actions were monstrous, but Jesus still saw their humanity. He prayed, God, forgive them, for they don’t know what they’re doing.
God, help me channel my outrage at wrongdoing into a creative force for good. 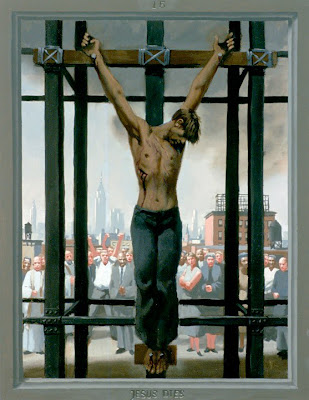 “Jesus Dies” places Christ’s crucifixion against a 21st-century city skyline. Some spectators cheer while others pray. Many, including some priests, watch grimly. Dark clouds gather in the sky above. Jesus looks dead.

Until now the images in this Passion series mostly seem plausible, but as Jesus dies the series enters a different realm, a soulscape of faith and symbolism. Public crucifixions do not happen in contemporary New York City in a literal sense. Crucifixions happen every day in a metaphoric way -- every time anyone does violence to another. Many queer people have died in circumstances of abuse and humiliation.

After an almost suffocating close-up focus on the torture of Jesus in the last four images, this Good Friday painting takes a step back. We get the big picture, seeing the crowd, the horizon, and the open sky.

The crucifixion could be taking place on top of a building, or on some kind of terrace. The scaffolding for the cross is an old sign frame, like the one on top of the red brick building in the back right. The outline of a skyscraper like the Empire State Building stands tall in the distance. Its presence hints at a subtext of this Passion: the 9/11 terrorist attacks that happened near Blanchard’s art studio while he was painting the series. The World Trade Center is missing from the skyline; it has gone up in smoke like the dark clouds gathering above Jesus.

“He said, ‘It is finished’; and he bowed his head and gave up his spirit.” -- John 19:30 (RSV)
As Jesus hung dying on the cross, the crowd mocked him. A few of his supporters watched from the distance. Among them were his mother and the man he loved. One of Jesus’ last wishes was to make them into a new kind of family. When he saw his mother and his beloved standing together at the cross, he used some of his last breath to call to his mother, Woman, behold your son! And to his beloved, he said, Behold your mother! They were helpless to stop the tragedy, but they chose to be present and keep on loving. All the suffering of a broken world seemed to come together at the crossroads of those terrible hours. After about three hours on the cross, Jesus shouted, My God, my God, why have you forsaken me? Nothing left, he emptied himself completely. With another loud cry, he died. His loving heart stopped beating. The death of Jesus was unique, and yet it was also terribly common. Whenever anyone commits violence against another, Christ is crucified.
God, help me find meaning in the brutal death of Jesus.
___
This is part of a series based on “The Passion of Christ: A Gay Vision,” a set of 24 paintings by Douglas Blanchard, with text by Kittredge Cherry.  For the whole series, click here.

Scripture quotation is from Revised Standard Version of the Bible, copyright © 1946, 1952, and 1971 National Council of the Churches of Christ in the United States of America. Used by permission. All rights reserved.
Posted by Kittredge Cherry at 5:41 PM

There is really "nothing more to be said". The reflections here, as well as the paintings themselves, can only be honored by the silence of ultimate pain.