Day 5: Jesus before the soldiers; Jesus is beaten (Gay Passion of Christ series) 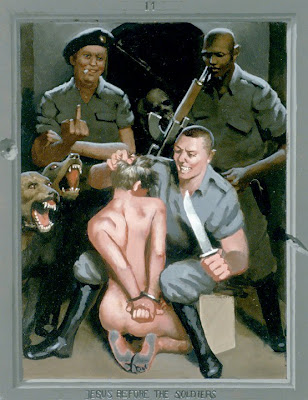 11.Jesus Before the Soldiers (from The Passion of Christ: A Gay Vision) by Douglas Blanchard
“Soldiers treated him with contempt and mocked him.” -- Luke 23:11 (RSV)

Marine look-alikes torment a naked man in “Jesus Before the Soldiers” from “The Passion of Christ: A Gay Vision,” a series of 24 paintings by Douglas Blanchard. Jesus kneels, naked and vulnerable, as a knife-wielding soldier grabs him by the hair. War dogs bark at him like hounds from hell, baring their teeth. A leering soldier flips the finger at him while another holds an AK-47 assault rifle. They are crowded in a claustrophobic space. Behind them a skull sits inside a gaping black hole.

I find this painting and the next one (“Jesus is Beaten”) to be the most terrifying images in the series. It hurts to look at them. After these, death comes as a relief. Maybe that’s the point.

The arch in back adds a black halo to the scene. There is no other way to identify the nude prisoner as Jesus -- except by remembering his words, “Whatever you do to the least of these, you do to me.” Whenever anyone commits violence against another, Christ is crucified -- including when LGBT people are attacked or killed for loving someone of the same sex.

When looking at these paintings of violence and nudity, it is essential to keep them in the holy context of Christ’s suffering. Otherwise they only glorify violence or fuel sadomasochistic fantasies, adding to the exploitation in the pictures. These explosive subjects must be handled with care. Blanchard paints the frame around all 24 images in the series, but in these two images the frame is especially important. The frame puts the torture in context, naming Jesus and numbering it to show that it is part of a larger story. Even so, we viewers do become accomplices as the soldiers leer out at us, urging us to laugh as they hurt and humiliate their victim. Note that this frame bears the scars of war: a bullet hole and a gash.

Both paintings are reminiscent of the notorious photos showing U.S. soldiers and military contractors abusing and torturing Iraqi prisoners at Abu Ghraib prison in Baghdad. The photos caused a major scandal when they became public in 2004, the same year that these were painted. Here it’s worthwhile remembering that the artist is a New Yorker who used these paintings to work through his feelings about the religious motivation of 9/11 terrorist attack there, which led to war with Iraq, which led to the abuses at Abu Ghraib.

There are Biblical parallels for these images. “Jesus Before the Soldiers” is a modern version of Jesus being mocked by soldiers and crowned with thorns . “Jesus is Beaten” is a new interpretation of Jesus being scourged, a scene often called “The Flagellation” in art history.

“Then the soldiers of the governor took Jesus… and they stripped him.” -- Matthew 27:27-28 (RSV)
The soldiers pulled off Jesus’ clothes and mocked him with contempt. They made ethnic jokes about him for being Jewish, and taunted him as a “king” because he taught that God’s kingdom of love is here and now. They could have used “queer” or a “faggot” or “lezzy” or any other slur. Whatever the words, whenever one person insults another, a child of God is humiliated. As Jesus said, whatever you do to the least of these, you do to me. The soldiers were young men similar to Jesus in many ways. The bullying was done by the soldiers, but the religious leaders were also to blame for the cruelty. The priests had set the stage for violence by calling Jesus a sinner. They targeted Jesus, but the pain spread far beyond him to terrorize many more people.
God, wherever there is hate and violence, make me a means of love and peace. 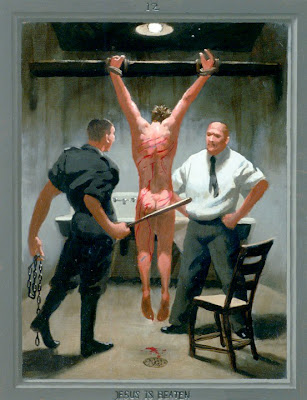 12. Jesus is Beaten (from The Passion of Christ: A Gay Vision) by Douglas Blanchard
“Then Pilate took Jesus and scourged him.” -- John 19:1 (RSV)
Pilate, the magistrate, ordered that Jesus be scourged -- a severe whipping before execution. This cruel punishment was state-sponsored terrorism against a man who defied the established order and hierarchy by teaching love for all. When they hit him, they did violence to everyone who has ever dared to be different. The charge against Jesus was treason, but his “crime” might have gone by a different name in another time and place. Governments have imposed similar tortures on people who threaten the social order in various ways, including homosexuality. The painful scourging left Jesus bleeding and in shock.
Jesus, you are no distant, untouchable God. You experienced human suffering firsthand. Be with all who suffer… and with all who cause suffering.
Scripture quotation is from Revised Standard Version of the Bible, copyright © 1946, 1952, and 1971 National Council of the Churches of Christ in the United States of America. Used by permission. All rights reserved.

The prayer at the end of this post especially got my attention. So often we pray for the victims, but forget that the ones most in need of prayer are in fact the perpetrators of violence. I remember one conversation in the context of a discussion of abused women, when I made a remark to the effect that the abuser also needed to be considered as possibly "hurting" in his own way. This comment was vehemently rejected at the time, but it is still true.