Kitt at HuffPost: Queer Christ Arises to Liberate and Heal 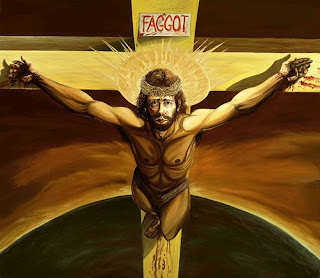 “The Crucifixion of the Christ” by Becki Jayne Harrelson

Visions of a queer Christ are on the rise as Easter approaches this year -- because the conventional Jesus is no longer enough. Christ's story is for everyone, but LGBT people get excluded when conservatives use Christian rhetoric to justify hate and discrimination…. 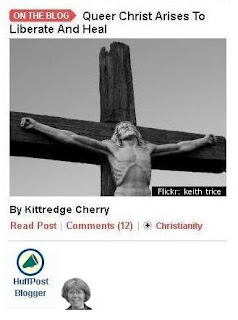 In the article I reflect on the growing number of queer Christ projects, including a new book, a new film and Becki Jayne Harrelson’s painting “The Crucifixion of the Christ” (pictured above).

I was surprised when Huff Post chose a different (generic) crucifixion photo to promote my article on their Gay Voices page instead of one of the queer Christian images from my post. I assume that the word “faggot” in Becki Jayne's painting was too inflammatory, even though the context is speaking out against hate speech. Doug Blanchard’s painting of Jesus being tormented by the soldiers also appears in my post, but it shows anti-gay violence with nudity and the finger, so that too is a kind of obscenity. But why is the “normal” crucifixion picture OK? It’s just as violent and obscene, but people have grown numb to its meaning.

Great you are in HuffPo and links to all the art - especially Doug's. RE: Crucifixion photo --Could be too shocking or maybe they were too rushed or too lazy to get permission so used a stock photo.

I'm a bit confused. Following the link, I see the two representations you say the DIDN'T use. Perhaps they changed their minds after your post in JIL?

Anyway, I'm involved in an ongoing dialog with a friend about our "traditional" representations of the Crucifixion. Seems that you can include as much gore as desired, but omit the nudity, even though everyone knows the Romans crucified their victims totally naked. Just another aspect of the notion that violence is more acceptable than sexuality?

I heard from a HuffPost editor, and apparently the choice to use a generic image on the front page was based on questions about rights to use the images by Becki Jayne and Doug. I had already gotten permission from them, but the editors didn’t check with me. They DID highlight my post on their Gay Voices “front page,” which is a big compliment that gives it a lot of extra visibility. Trudie, the confusion is because they kept Doug and Becki Jayne’s images with my article (and the link used here), but put a different image on the “front page.”

Thank you Kittredge for your unwavering support and advocacy for all of God's people. You've gave me more hope. God bless you and your loved ones