Our 25th anniversary is today! 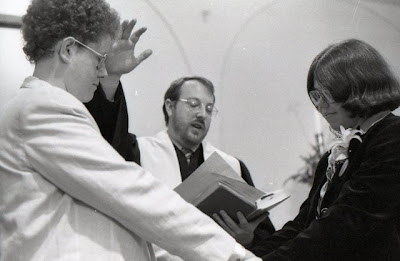 Kittredge Cherry, right, and Audrey are united in Holy Union on April 11, 1987 (photo by Lisa Wigoda)
My beloved Audrey and I were joined in a Holy Union ceremony 25 years ago today on April 11, 1987 at Metropolitan Community Church of San Francisco. Today on our 25th anniversary, we invite you to share our joy!

Our wedding was so long ago that nobody even dared to use the term “wedding” for the blessing of our same-sex relationship. Domestic partnerships and civil unions were still at least a dozen years away from becoming law. Marriage equality was non-existent as a concept. It wasn’t even at the stage of being an impossible dream. Many of the guests that we invited didn’t even understand what we were inviting them to witness.

Public opinion was so universally against us that nobody had even bothered yet to take a poll about it. The first Gallup poll on “marriages between homosexuals” was in 1996, with 68 percent against and 27 percent in favor. We became part of the rising tide that turned public opinion around. By 2011, 53 percent favored same-sex marriage.

But nothing could stop us from pledging our love to each other before God and community. After blessing us, the pastor declared, “Let no one -- let no church, let no state -- put asunder that which God has joined together!”

And we are still together 25 years later! 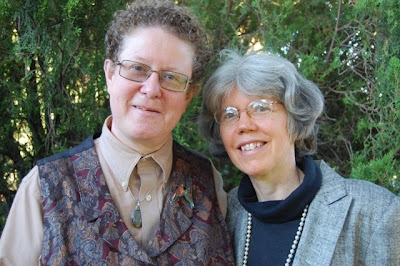 Kittredge Cherry, right, and Audrey -- 25 years after our Holy Union. Love kept us together.
___
Related links:

Marriage Between Homosexuals Is Nothing New for Some in S.F. (1989 Los Angeles Times article about our Holy Union)

Public opinion of same-sex marriage (Wikipedia)
Posted by Kittredge Cherry at 11:08 AM

I have posted an emphatic TBTG on the Saint Laika's prayer page today.

And, thank you, for making the world a much nicer, more Christian place, through courageous standing up to be counted.

I am proud to say I knew you when! What a joy is was for me to be entrusted with documenting your Holy Union those 25 years ago!! I see you've been busy, Kit, writing books and making a difference, indeed, in the world. I'm so happy and proud of you! My son Jack is 28, living in Quincy, and loving selling cars. Who'd have thunk it? I bought an old building and have been renovationg it the lat 3 years. I will be opening a studio here soon. Love to you both! Lisa

Audrey and I loved reading all the anniversary greetings here, at Facebook, and at MadPriest’s blog. Thank you! We fell in love about 10 years before our Holy Union. As you can imagine, we have faced plenty of opposition to our relationship over the years, so we don’t take anybody’s support for granted.

Perhaps you can tell from the photo that we didn’t have a very fancy wedding. It has been gratifying to see that our simple, long-ago Holy Union ceremony is inspiring to so many people now. I’m thinking that I will post more photos on our next anniversary.

LWP, I’m delighted that the anniversary has caused us to reconnect!

Belated congrats to two wonderful people! You are witnesses to God's inclusive love.

Congratulations you two. Wonderful news and thank you so much for such a wonderful "Jesus in Love" blog. It is truly a blessing.
love Keith