Adrienne Rich portrait by Sharon McGill
Adrienne Rich, a lesbian feminist and one of the most influential poets of the 20th century, died on March 27, 2012 at age 82.

For a new version of this article, click this link to Qspirit.net:
Adrienne Rich: lesbian poet with spiritual impulses


Her writing was a guiding light to me and countless others, both people of faith and secular readers. The following lines from her poem “Natural Resources” (from The Dream of a Common Language: Poems 1974-1977

Rich was born on May 16, 1929 to a Jewish father and Episcopalian mother. She wrote about her conflicting religious background in her essay “Split at the Root” (from Blood, Bread, and Poetry: Selected Prose 1979-1985

I had the honor of meeting Rich in person in the 1980s when she spoke at Metropolitan Community Church of San Francisco, where I served on the clergy staff. Informally among ourselves, we called her “the Great One.”

Many years later I was impressed all over again when I listened to my cassette tape of her remarks and reading at MCC-SF on Nov. 7, 1987. I was there in person and I remember it well.  Speaking to the mostly LGBT audience from both Jewish and Christian traditions, she emphasized the importance of bringing together sacred and secular, Christian and Jew, lesbian and gay and straight. The event was co-sponsored by Congregation Sha'ar Zahav, a progressive Reform Jewish congregation in San Francisco.

I transcribed what she said about her connection to spirituality:

The coming together of those of us who are non-congregants with you who are is very important. A couple of years ago in a talk and reading that I gave at UCLA Hillel, I described myself as a secular Jew and later in a discussion Andy Rose (Avi Rose) asked me why, since he felt the poetry I was reading to be spiritual rather than secular in its impulse. I’ve thought a lot about that and about the lines drawn in Judaism between secular and religious, and between various degrees and forms of observance.

Along with all the work being done by observant Jewish feminists, the re-creation of liturgy towards a theology of wholeness, I think there are some of us who are drawing a deep spiritual sustenance from the Jewish secular progressive tradition, who are trying to fuse the material and the spiritual rather than leave them in the old dichotomous opposition, coming from a secular rather than a religious orientation and wanting to keep asking the questions of flesh and blood, of justice, of bread, the questions of this world.

Maybe we don’t know exactly what we are trying to do nor yet have a language for it. Liberation theology is not quite it, though the concrete examples of liberation theology in action, both Jewish and Christian, have revealed certain possibilities. The wealth of blessing that proliferate in Jewish tradition -- the tradition that bids Jews bless all kinds of everyday as well as exceptional events and things: new clothes, a new moon, bread, wine, the washing of hands, our teachers, spices, the sight of lightning, the sound of thunder -- this tradition has implications as well. And for me this has implications for poetry. And since I would never claim that poetry can be purely secular, I will have to leave it for now at that.

She also talked eloquently about LGBT life with words that are still just as true more than 25 years later:

There is no simple way to speak about what’s happening in lesbian and gay communities at the end of the 20th century. We know that in the history of our communities there have been many efforts and many ways of defining ourselves against the hostile and destructive definitions that have been ground out by a heterosexuality badly in trouble and terrified of its own complexity, terrified of its own fragility. Nothing obviously but a deep sense of anxiety of identity could produce the kind of projective thinking and scapegoating which has targeted lesbians and gay men along with any women and men who have refused the straightjackets of gender.

Rich had a big impact on the lives of many people, including artist Sharon McGill whose art graces this post. Her tribute "Wonder Woman: Adrienne Rich" is posted at her McGillustrations blog. 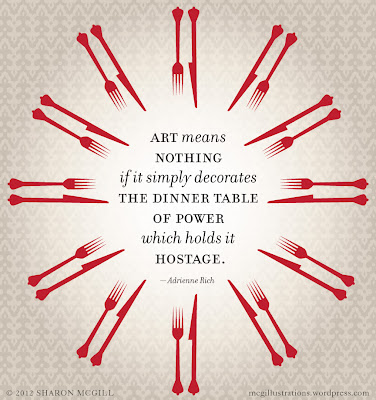 Artist Sharon McGill illustrated a quote from Adrienne Rich: “Art means nothing if it simply decorates the dinner table of power which holds it hostage.”
Rich's essay “Women and Honor: Some Notes on Lying” (from On Lies, Secrets, and Silence: Selected Prose 1966-1978

Posted by Kittredge Cherry at 6:45 PM

You may well call her an LGB saint, but I wouldn't be so quick with the T. I don't wish to diminish the positive impact she had on many people, but her friendship with and support of transphobes like Janice Raymond disqualifies her for anything resembling saintliness in the trans* world. Rich helped Raymond write her vicious smear campaign against trans women, The Transsexual Empire.

Adrienne Rich and transmisogyny: We can begin by acknowledging that it matters

Again, I don't want to tarnish the positive impact she had on many folks, but it needs to be seen in the light of the hatred to which she contributed as well.

It’s important to remember Adrienne Rich’s negative attitude and actions toward transgender women. Thank you, Gabe, for calling this to my attention. I visited the links you sent and found them compelling. I will add one to the main body of the text.

I have not thought of Adreienne Rich in decades. At a Southern Baptist college in NC, an English professor (now lesbian activist) introduced Rich's work to our class over 30 years ago. I will now have a new appreciation for both the author and the teacher, who were speaking up l-o-n-g ago in ways not then apprehended but now respected.