LGBT Stations of the Cross shows struggle for equality 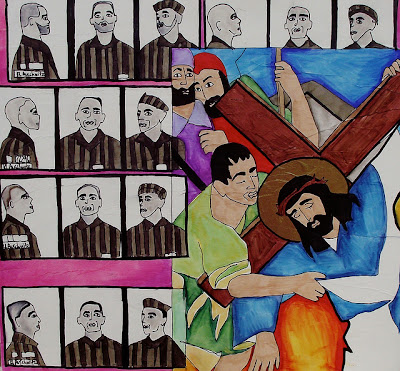 Jesus falls the first time as Nazis send LGBT people to concentration camps in Station 3 from “Stations of the Cross: The Struggle For LGBT Equality” by Mary Button, courtesy of Believe Out Loud

“In the sacrifices of martyrs of the LGBT movement, we can come to a new understanding of the cross, and of what it means to be part of the body of Christ,” explains Tennessee artist Mary Button in her official artist statement.

Button painted the LGBT Stations series for Believe Out Loud, an online network empowering Christians to work for LGBT equality. They invite churches and faith groups to download and use the images for free.

The whole series will also be shown here at the Jesus in Love Blog starting tomorrow, with two images per day for a week. The original paintings will be displayed in Washington DC during Holy Week, which coincides with Supreme Court oral arguments on same-sex marriage.

Button matches each traditional Station of the Cross with a milestone from the past 100 years of LGBT history, including Nazi persecution of homosexuals, the Stonewall Rebellion, the assassination of gay politician Harvey Milk, the AIDS pandemic, ex-gay conversion therapy, the murder of transgender Rita Hester, the ban on same-sex marriage, and LGBT teen suicides.

The Stations of the Cross are a set of artistic images traditionally used for meditation on the Passion of Christ. They tell the story of his crucifixion from his sentencing until his body is laid in the tomb.

After Easter Button plans to paint Station 15 showing the resurrection. “I’m hopeful that the Supreme Court will rule DOMA unconstitutional and I'll be able to create a Resurrection piece about the ruling!” she told the Jesus in Love Blog.

Update: “Station 15: The Resurrection Of Christ” was completed soon after the Supreme Court's June 26 ruling for marriage equality.

Button creates some startling images as she illustrates the LGBT struggle in chronological order beside the Jesus’ journey to Calvary. For example, when Jesus is nailed to the cross, queer people are hooked up for electroshock therapy meant to “cure” homosexuality.

The LGBT Stations are generating controversy. The conservative Lutheran website Exposing the ELCA denounced the series as “offensive”and “disgraceful” for associating Christ’s sacrifice with LGBT rights.

Button traces the origins of her LGBT Stations to a book that relocated the gospels into the African American civil rights movement, ending with Christ as a black man lynched in Georgia. Her life changed when she read “The Cotton Patch Version of Luke and Acts: Jesus’ Doings and the Happenings” by Clarence Jordan.

“I believe that we can only begin to understand the meaning of the crucifixion when we take away our polished and shiny crosses and look for the cross in our own time, in our own landscape,” she said in her artist statement.

For this reason, she committed to create a new Stations of the Cross series on social justice issues every year. “Last year, my stations took viewers on a journey through the beginnings of the Syrian uprising,” she told the Jesus in Love Blog. “This year I decided to do a series of stations related to LBGT equality when I learned that the Supreme Court will be hearing oral arguments on the Defense of Marriage Act during Holy Week.”

She makes bold, colorful line drawings with a folk art vibe and collage effect. LGBT historical documents became visual elements in her Stations. For example, the background for “Station 2: Jesus carries his cross” is the charter of the Society for Human rights, founded in 1924 as the first homosexual rights organization in America.

Button is minister of visual arts at First Congregational Church in Memphis. She has created artwork for the National Council of Churches, Ecumenical Women at the United Nations, and the Evangelical Lutheran Church in America. Daughter of a Lutheran minister, Button received a master of theological studies degree from Candler School of Theology after graduating from the Tisch School of the Arts at New York University. Her work has been exhibited across the United States including at the Museum of Biblical Art and the Church Center for the United Nations.

The original 12-by-12-inch LGBT Stations of the Cross paintings will be on exhibit this week at the Lutheran Church of the Reformation in Washington DC. The same church is also the location for the major Interfaith Prayer Service preceding the rally for marriage equality at the Supreme Court on Tuesday. The church will be open for visitors to see the LGBT Stations paintings from 5 - 7 p.m. Monday (March 25) and from 8:30 a.m. to 5 p.m. Tuesday and Wednesday (March 26-27). Each painting is mixed media on vellum, mounted on panel.

“We hope the stations inspire Christians to reflect on Christ’s presence in human suffering as we work together to promote the dignity of all people,” said Joseph Ward, director of Believe Out Loud. “We are impressed by the way Mary Button weaves Christian symbols and liturgy together with contemporary themes in her art, so we approached her to commission the series. This stations series is designed as a resource for congregations; we hope churches will download and use these stations during the Lenten season for prayer and reflection.”

Here is a complete list of Button’s LGBT Stations of the Cross. All of them will be posted at the Jesus in Love Blog over the next week. Click the titles below to view individual paintings with text provided by Believe Out Loud, Mary Button and Wikipedia and mini-commentaries by Kittredge Cherry.

“The Passion of Christ: A Gay Vision” by Douglas Blanchard

Timeline of LGBT history (Wikipedia)
___
Special thanks to Ann Fontaine and Colin for the news tip.

Posted by Kittredge Cherry at 11:12 AM

Good news: Mary Button just finished the last painting in her LGBT Stations series: “Station 15: The Resurrection of Christ.” It shows the risen Christ with plaintiffs from the recent US Supreme Court decisions for marriage equality. Her painting makes the glorious connection between the crucified Christ coming out of the tomb to new life and persecuted queer people coming out of the closet to celebrate our love with weddings that are just as valid as any other. You can see the painting and read my reflection at the Jesus in Love Blog: