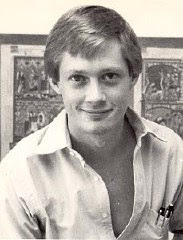 Posted by Kittredge Cherry at 1:53 PM

I have both heard Boswell speak and read his books! What a gift!

Trudie, with your personal experience of John Boswell, maybe you should consider writing a “remembrance” for his profile at the LGBT Religious Archives Network. (It’s one of the “related links” at the end of my article about him.) I never got to meet him, but I heard that he was “like an angel” in person.