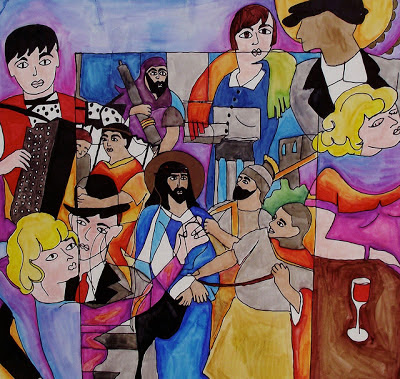 Jesus is condemned to death and “faggot” first appears in print in Station 1 from “Stations of the Cross: The Struggle For LGBT Equality” by Mary Button, courtesy of Believe Out Loud

Putting the death sentence of Jesus with the first use of "faggot" reveals a harsh truth: Words are often the first step on the continuum of violence.  In the beginning was the word.

“Stations of the Cross: The Struggle for LGBT Equality” is a new set of 14 paintings that link the crucifixion of Jesus with the sufferings of LGBT people.

The whole series will also be shown here at the Jesus in Love Blog this week. Click here for an overview of the LGBT Stations by Kittredge Cherry, lesbian Christian author and art historian.
Posted by Kittredge Cherry at 10:35 AM