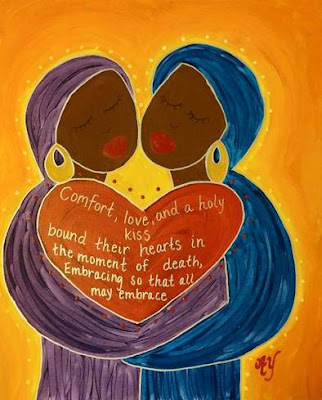 “Perpetua and Felicity” by Angela Yarber

Saints Perpetua and Felicity were brave North African woman friends who were executed for their Christian faith in the third century. Some consider them lesbian saints or patrons of same-sex couples. Their feast day is March 7.

Perpetua and Felicity were arrested for being Christian, imprisoned together, and held onto each other in the last moments before they died together on March 7, 203.


For a new version of this article, click this link to Qspirit.net:
Perpetua and Felicity: Patron saints of same-sex couples

Perpetua and Felicity are still revered both inside and outside the church. For example, they are named together in the Roman Catholic Canon of the Mass. They are often included in lists of LGBTQ saints because they demonstrate the power of love between two women.

The details of their imprisonment are known because Perpetua kept a journal, the first known written document by a woman in Christian history. In fact, her "Passion of St. Perpetua, St. Felicitas, and their Companions” was so revered in North Africa that St. Augustine warned people not to treat it like the Bible. People loved the story of the two women comforting each other in jail and giving each other the kiss of peace as they met their end in the amphitheater at Carthage, where they were mauled by wild animals before being beheaded.

Perpetua was a 22-year-old noblewoman and a nursing mother. Felicity, her slave, gave birth to a daughter while they were in prison. Although she was married, Perpetua's husband is conspicuously absent from her diary.

Yale history professor John Boswell names Perpetua and Felicity as one of the three primary pairs of same-sex lovers in the early church. (The others are Polyeuct and Nearchus and Sergius and Bacchus.) The love story of Felicity and Perpetua is told with historical detail in two books, “Same Sex Unions in Pre-Modern Europe

” by Boswell and “Passionate Holiness

” by Dennis O’Neill. He is founder of the Living Circle, the interfaith LGBT spirituality center that commissioned the following icon of the loving same-sex pair. It was painted by Brother Robert Lentz, a Franciscan friar and world-class iconographer known for his progressive icons.

The Lentz icon of Perpetua and Felicity is one of 10 Lentz icons that sparked a major controversy in 2005. Critics accused Lentz of glorifying sin and creating propaganda for a progressive sociopolitical agenda, and he temporarily gave away the copyright for the controversial images to his distributor, Trinity Stores. It is rare to see an icon about the love between women, especially two dark-skinned African women. The rich reds and heart-shaped double-halo make it look like a holy Valentine. “Perpetua and Felicity” is one of 40 icons featured in “Christ in the Margins,” an illustrated book by Robert Lentz and Edwina Gateley.

“I first learned of Perpetua and Felicity on Kittredge Cherry’s blog, Jesus in Love. Now they join my other Holy Women Icons with a folk feminist twist,” writes artist Angela Yarber at the Feminism and Religion blog. She is a painter, scholar, dancer, minister and LGBT-rights activist based in North Carolina. Nearly 50 color images of her folk feminist icons included in her book "Holy Women Icons." Yarber depicts the pair of women saints with golden warmth and an African vibe. Her icon at the top of this post shows Perpetua and Felicity hugging as their hearts unite into a single large heart. It is inscribed with the words:

Comfort, love, and a holy kiss
Bound their hearts in
The moment of death,
Embracing so that all
May embrace

“Felicity and Perpetua: Patrons of Same-Sex Couples” by Maria Cristina

A banner saying “patrons of same sex couples” hangs above Felicity and Perpetua in the colorful icon painted by Maria Cristina, an artist based in Las Cruces, New Mexico. She paints the two women holding hands in an elegant gesture. The skull of a long-horn cow, similar to paintings of famous New Mexico artist Georgia O’Keefe, adds a welcome bit of Southwestern flavor to the image.

Artist Jim Ru was inspired to paint Felicity and Perpetua as a kissing couple. His version was displayed in his show “Transcendent Faith: Gay, Lesbian and Transgendered Saints” in Bisbee Arizona in the 1990s.


Their lives are the subject of several recent historical novels, including “Perpetua: A Bride, A Martyr, A Passion

” by Amy Peterson and “The Bronze Ladder

Icons of Perpetua and Felicity and many others are available on cards, plaques, T-shirts, mugs, candles, mugs, and more at Trinity Stores

Posted by Kittredge Cherry at 12:18 AM

What a sick and twisted version of history. It is ridiculous and unjustified, totally absurd, to ascribe a sexual component to these two. Obviously, you misunderstand Christian love.

You are quite horrendously insane if you actually believe these early saints were homosexual. These women died for a faith which stands against perversion and evil. How do you suppose they both had become pregnant? Ancient in vitro? These were married heterosexual women who would have very strongly warned you against sin, and did while in the arena. Believing your way of life is okay against all reason and logic is one thing, but going so far as to utterly rewrite history with zero evidence to support your position is quite another. Is there anything in the world at this point that WOULD convince you that you'd gone astray? Or is your mind so absolutely blinded by this point that not even factual history deters you?

We will never know for sure everything that happened more than 1,600 years ago between Perpetua and Felicity, but they can inspire some of today’s LGBT people to live better lives. They don’t need to physically have sex with each other in order to have what we call a gay sexual orientation. Homosexuality is more than sexual conduct. The American Psychological Association defines sexual orientation as “an enduring pattern of emotional, romantic, and/or sexual attractions.”

Jesus himself did not say anything directly about homosexuality in the Bible. Scripture does not condemn loving, responsible homosexual relationships. There are many resources that fully explain the Bible and homosexuality. Here are a few that I recommend:

Jesus said nothing directly about homosexuality, but he did say, “Do not judge, so that you will not be judged.” (Matthew 7:1)