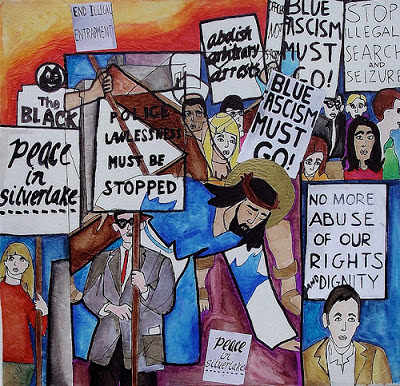 Jesus really seems to be walking with the gay protestors in this painting. Stonewall was the turning point, but lesser-known protests paved the way. I live near the Silverlake neighborhood where the Black Cat Tavern is still located -- now declared a Los Angeles Historic-Cultural Monument. The protest there also helped inspire Troy Perry to found the LGBT-affirming Metropolitan Community Churches.

The whole series will also be shown here at the Jesus in Love Blog this week. Click here for an overview of the LGBT Stations by Kittredge Cherry, lesbian Christian author and art historian.
Posted by Kittredge Cherry at 12:42 PM