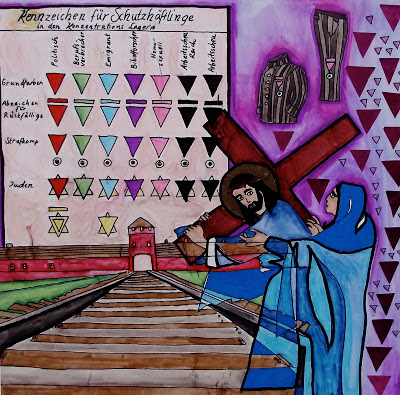 Jesus meets his mother and LGBT prisoners are kept in Nazi concentration camps after Allied liberation in Station 4 from “Stations of the Cross: The Struggle For LGBT Equality” by Mary Button, courtesy of Believe Out Loud

Nazis and Allies were enemies, but they agreed that homosexuals should be locked up. The Allies liberated everyone else, but kept those who wore the pink triangle in prison! In Jesus’ time Romans and Jews were enemies, but they agreed that the man who loved without limits should die. The Nazis used pink triangles to identify prisoners sent to concentration camps for homosexuality. It was part of a system of triangles labeling people they deemed “undesirable.” Originally intended as a badge of shame, the pink triangle has become a symbol of pride for the LGBT movement.