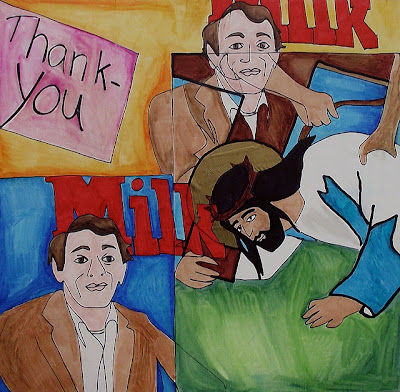 Whenever anyone commits violence against another, Christ is crucified again -- including when gay rights pioneer Harvey Milk was shot. He has been called a martyr for LGBT rights -- and for all human rights. “If a bullet should enter my brain, let that bullet destroy every closet door in the country,” Milk once said. Two bullets did enter his brain, and his vision of equality is also coming true.

The whole series will also be shown here at the Jesus in Love Blog this week. Click here for an overview of the LGBT Stations by Kittredge Cherry, lesbian Christian author and art historian.

Posted by Kittredge Cherry at 12:06 PM